A poll published in the Brandon Sun by Probe Research shows just how much trouble the Manitoba New Democrats are in, with four months to go before voting day in the province.

The poll shows that the NDP's support in western Manitoba has dropped by more than half, from 41% to 18%. Virtually all of that has gone to the Manitoba Liberals, who have risen from 4% to 22%. The Progressive Conservatives, meanwhile, have not seen their vote change at all: they took 53% of the vote here in the 2011 provincial election, and are now polling at 54%.

This is the developing story of the Manitoba election, that the PCs will almost win by default as the NDP loses a huge share of its vote to the Liberals. Look at the regional breakdown in the Probe poll. 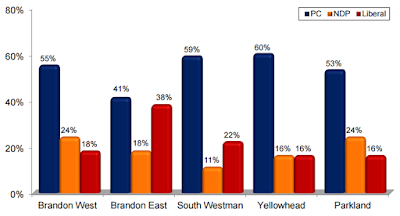 In the rural parts of western Manitoba, the PCs are even less likely to be challenged. But even there, in Parkland the margin was just 14 points in 2011. Now, with the PCs down two points, the margin is 29 points.
Posted by Éric at 9:31:00 AM