Liberals win in dramatic fashion in Newfoundland and Labrador

That the Newfoundland and Labrador Liberals won big in last night's provincial election came as no surprise. If anything, many expected their victory to be even bigger.

But despite those over-heated expectations, Newfoundlanders and Labradorians still delivered the Liberals and Progressive Conservatives their respective best and worst performances in half a century — and the most significant swing in a party's fortunes in the province's history.

You can read the rest of my first run-through of the Newfoundland and Labrador election results here. I'll be back with a more detailed post about how the projection and the polls did this week. 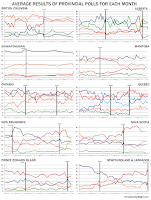 In the meantime, I thought I'd post the updated monthly provincial polling averages chart, which I had let lapse during the federal election campaign. You can click on the chart to the left to magnify it, and you can always find it in the right-hand column of this site.