The latest installment of the Nanos weekly tracking poll still has Justin Trudeau well ahead on who Canadians think is the best person to be prime minister. 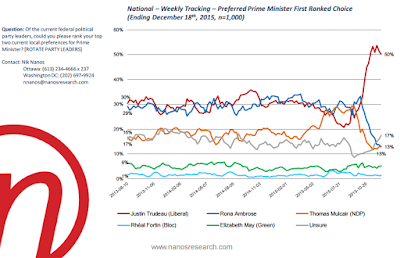 Compared to the last completely independent sample (recall that Nanos employs a four-week rolling poll with weekly updates), Trudeau is down a little more than three points. Ambrose is also down, but that previous sample included some numbers for Stephen Harper, so it is an apples to oranges comparison.

Trudeau's drop is within the margin of error, but it will be interesting to track these independent samples rather than just the week-to-week variations. I'll put together a chart for that once Nanos's poll chugs along for a little longer.

Forum Research put out a poll on Ottawa issues today. They are virtually all of very local concern, so I invite you to peruse Forum's report.

But Mayor Jim Watson's approval rating is of note. Forum pegs it at 73%, with just 27% of Ottawa residents disapproving of Watson. His numbers are high across the board, particularly among Ontario Liberal and Ontario NDP supporters. But even a narrow majority of PC supporters in the city support Watson, who in a former life was an Ontario Liberal MPP and cabinet minister.