The Angus Reid Institute has published its quarterly review of premiers' approval ratings from coast-to-coast (excluding the territories and Prince Edward Island). The numbers show some significant shifts in opinion since Angus Reid's summer poll, and diverging fortunes for the two premiers headed for an election in April.

But while Brad Wall still topped the list, some (small) cracks are beginning to show in his dominance in Saskatchewan. 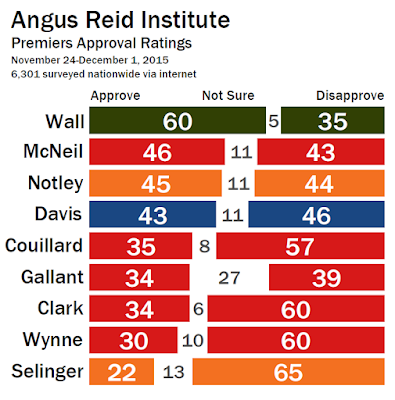 Wall's approval rating stood at 60 per cent in the poll, with 35 per cent disapproval. That puts him as the only premier with a majority approval rating, but it is his lowest approval rating recorded by the Angus Reid Institute since these quarterly polls began at the end of 2012.

(Paul Davis was included in this poll, as he lost the Newfoundland and Labrador election on November 30.)

Brian Gallant of New Brunswick was the only other premier with a generally even rating, scoring 34 per cent approval and 39 disapproval. His 'not sure' rating of 27 per cent was, by far, the largest.

Wall and Selinger, book-ending the table, are also the two premiers headed to an election in the spring. However, in terms of who has positive momentum and who has negative momentum, the roles are reversed. 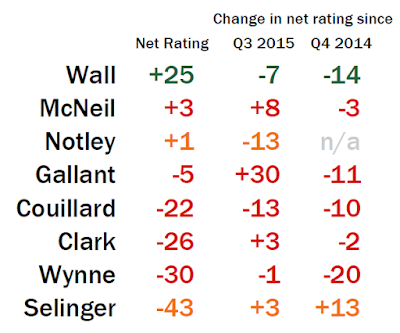 Since the last quarter, Selinger's net approval rating has increased by three points, from a woeful -46 to a still woeful -43. But since this time last year, in the final quarter of 2014, Selinger's net approval rating has actually improved by 13 points. That is the greatest improvement recorded by any premier in the last year. Admittedly, though, it was from a very low base.

Wall, on the other hand, has seen his net approval rating drop by seven points since the last quarter, and 14 points since last year. Only Wynne had a worse year-on-year drop in support, with her net rating dropping by 20 points to -30.

McNeil and Gallant, perhaps buoyed by the federal Liberals' strong performance in Atlantic Canada, saw their net approval ratings increase by eight and 30 points, respectively. Clark was also up three points since the last quarter.

If approval ratings can act as a proxy for potential electoral performances, a few of these premiers are in a very safe position: Wall, McNeil, and Notley. Couillard could prevail in a divided political landscape in Quebec. Clark and Gallant would be in much more trouble, while Wynne and Selinger would be defeated.

Luckily for most of these premiers, they do not have to face the electorate for quite awhile — the provincial elections on the schedule for 2017 are in British Columbia and Nova Scotia, and Clark has shown her resilience before. Wall is a virtual lock for the April election in Saskatchewan, but Selinger looks like he will be in tough.

Of course, four months is an eternity in politics, so neither Wall nor Brian Pallister, leader of the Manitoba Progressive Conservatives, can take anything for granted. But these will be hard numbers to mess up, in Wall's case, or, for Selinger, overcome.
Posted by Éric at 11:14:00 AM