Perhaps the debate was better for Christy Clark than most people thought, or perhaps the campaign is finally catching up to Adrian Dix. But the B.C. Liberals have made good gains in the polls and have now narrowed the gap between themselves and the B.C. New Democrats to single-digits.

Some context is needed, however. Trailing by seven points in the polls with less than two weeks to go before the vote is not a position most incumbent governments would want to be in. The forecast considers the odds that the Liberals will be able to close the gap completely by May 14 to be only 7.3%. In fewer than one out of every 10 cases has a party been able to close such a gap in such a short period of time. But those are better than the 50-to-1 odds Clark had only a few weeks ago.

Nevertheless, we are definitely in a new part of the campaign. The New Democrats are still safely ahead of the Liberals but the gap is not nearly as comfortable as it was before. They are now projected to have 43% support, down 3.8 points from the last projection that included polling data up to Apr. 26. The Liberals are up 2.6 points to 35.8%, while the Greens are up 1.4 points to 10.1%. The Conservatives have held steady with 7.8% support.

The ranges have tightened up somewhat due to three new polls being added to the model, and the projected vote ranges do not overlap. But the seat ranges do: the New Democrats are projected to win between 38 and 53 seats, while the Liberals are projected to win between 28 and 46 seats. For the first time in the projection model, the upper range for the Liberals is actually enough to win the election.

More precisely, the New Democrats are projected to win 46 seats and the Liberals 38, a rather close result. With a gap of only eight seats between the two, the projection model now gives the New Democrats a 73.8% chance of winning the most seats if an election were held today, a big change from the 95.2% chance of Apr. 26. Considering the potential for further swings and errors in both the projection model and polls, eight seats is not a very good cushion.

One big advantage the New Democrats have is that they are holding relatively steady in the Vancouver region, where almost half of the province's seats are located. They only dropped 1.5 points there, and are still projected to win 25 seats. Their lead on Vancouver Island has been whittled down, though, with a drop of 7.1 points to 45.8%. The Liberals jumped 7.6 points to 30.9% (the Greens were mostly unchanged), and could now win two seats on the island.

The most important change occurred in the Interior and North. The New Democrats plummeted 8.5 points to 35%, pushing them behind the Liberals. They are up 5.3 points to 41.1%, giving them the lead for the first time in the region since the projection model was launched in November. Accordingly, they are projected to win 22 seats in the area, with only nine going to the New Democrats. The NDP will need to make up ground here.

But the polls are certainly under-estimating the New Democrats and the Liberals. The unadjusted average gives the NDP 40.7% and the Liberals 33.8%, with 12.5% going to the Greens and 10.1% to the Conservatives. But without a full slate (not to mention their disadvantage in money and organisation), it is virtually impossible that the Greens and Conservatives will take that much of the vote. The model assumes that the over-estimation will go the NDP and Liberals proportionately, but if it doesn't the end result could be at the higher or lower ends of the projection ranges.

The forecasts are currently unusable. The polls have moved around so much in the last 12 days that the model considers anything possible. If the polls continue to swing to the degree that they have in the last two weeks, the Liberals could easily be re-elected or catastrophically defeated. The uncertainty and volatility that the last few days have instilled in the model make the result of May 14 impossible to predict with a good degree of confidence. All that can be said is that, with what the polls are currently showing, the New Democrats are in a far superior position than the Liberals and should still be heavily favoured to win. 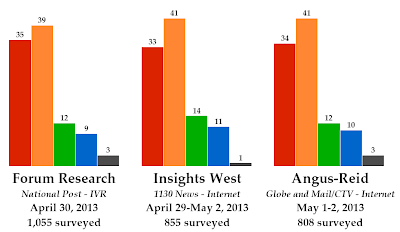 The poll by Forum Research for The National Post that was released yesterday morning caused the biggest splash, as it put the gap between the New Democrats and Liberals at only four points. But the polls that were subsequently released by Insights West and Angus-Reid show that Forum was not completely out of whack.

Looking at the three polls together, you can see that the differences are marginal.

Forum has not polled in British Columbia since August 2012, so the trends that could be derived from their survey are slim to none. They show a close race in Vancouver (42% to 36% for the NDP) and on Vancouver Island (39% to 33%), while the Liberals were ahead in the Interior and North (37% to 29%).

The survey put the Liberals ahead among those aged 55 and older, while the NDP held a one-point advantage among men and a seven-point edge among women.

A potential problem with the poll, however, is that 48% of people polled who said they voted (or could remember who they voted for) in 2009 cast a ballot for the Liberals, while only 30% did so for the NDP (the 8% result for the Greens was good, the 8% for the Conservatives was not). The actual margin in 2009 was 46% to 42%. The poll under-sampled New Democrats, then, but whether or not Forum weighted for this factor is a mystery. It is probably the reason that Forum has the NDP lower than the other two polls.

Insights West released their poll to News 1130, and found a more significant eight-point gap between the NDP and Liberals. They were last in the field Mar. 26-31, and since then the NDP fell four points and the Liberals gained five. Insights West also showed a closer race in Vancouver (41% to 35%) and a Liberal advantage in the Interior/North (33% to 30%), but not nearly the close race that Forum had found on Vancouver Island (43% to 28%). It does seem, however, that the Liberals are no longer in danger of placing third on the island. Green support was very consistent across these three polls, at between 19% and 21% on Vancouver Island.

Insights West included some numbers on likelihood of voting, finding that the New Democrats had the most certain respondents (97%), while Liberals (93%), Greens (91%), and Conservatives (89%) were somewhat less convinced. If those people who were not certain do not vote, Insight West's eight-point gap turns into a nine-point margin in favour of the NDP.

Angus-Reid's poll for The Globe and Mail and CTV News found similar movement, though their last survey was more recent (Apr. 24-25). They put the NDP down four points to 41% and the Liberals up three points to 34%. Those are probably not statistically significant changes in support, but the trend is in favour of the Liberals over the last few surveys.

Interestingly, Angus-Reid found that the gender gap had disappeared with the NDP having a seven-point lead among men and an eight-point lead among women. Like Forum (but unlike Insights West), they showed the Liberals doing much better than before among older voters. The demographics are not so bad for the Liberals anymore.

It is undeniable, then, that the race has been tightening up. But it was always supposed to - at least according to the politicians and the pundits (including yours truly). However, Clark is still at a personal disadvantage compared to Dix.

Her approval ratings in the Forum and Angus-Reid polls were almost identical: 34% approval, 56% to 57% disapproval. That is better than some of the numbers Clark had put up in the past, but they are still very bad. She really needs to be at 40% or more approval to be able to win. Because of her personal unpopularity, she keeps the potential for Liberal gains down.

Dix's numbers are not stellar either (37% approval to 44% disapproval for Forum, 41% approval to 47% disapproval for Angus-Reid), but they remain better. And 45% of respondents to Angus-Reid's poll still say their opinion of Clark has worsened, a much higher proportion than those who say their opinion of Dix has worsened. Of note, however, is that Clark now leads Dix on the question of who is best able to handle the economy, something that has not occurred for a very long time. But Dix still leads on other important issues like health care and education, but the economy remains the top campaign issue.

So, it is a race. Clark has gained on Dix but she still trails by a significant margin. It could be that she has momentum and will continue to gain, or it could be that she is peaking now and will end up with the moral victory of having salvaged her party from a mauling. We should have a better idea of which is closer to the truth in a week's time.
Posted by Éric at 11:32:00 AM