B.C. NDP on track for win, but doubts remain

The penultimate update to the projection and forecast for tomorrow night's election in British Columbia shows the gap in popular support widening between the B.C. New Democrats and the B.C. Liberals, but the  margin in the seat projection tightening up. Adrian Dix and the NDP retain the advantage across every poll, but disagreement in some of the last surveys of the campaign leave the question of how it will all turn out unanswered.

The NDP is projected to have between 43.6% and 47.4% support, while the Liberals stand at between 35.6% and 39.4%. The precise projection puts the NDP at 45.5% and the Liberals at 37.5%, a gain of 2.5 points for the NDP compared to the last projection and an uptick of 0.7 points for the Liberals. The model estimates that the odds the Liberals can overcome this eight point margin in the four days between the most recent polls and election day to be just 2.8%.

The New Democrats are now projected to win between 45 and 56 seats, putting them in majority territory, while the Liberals stand at between 26 and 40 seats. The most likely outcome, at 48 seats for the NDP and 36 for the Liberals, represents a swing of four seats from the NDP to the Liberals since the last projection. A margin of eight seats is not very much, and the model estimates the odds of the Liberals being able to win the most seats with these numbers to be 21.4% (this takes into account both polling error and seat modelling error).

The gain in seats for the B.C. Liberals occurred primarily in the Interior and North, as the party narrowed the margin in the region and is now projected to win the majority of seats there.

But on the face of it, the New Democrats seem to be in a strong position. Their projected vote and seat haul does not overlap with the Liberals, at least based on current polling information. But what about how things might change between the last last poll and the actual vote?

This is difficult to judge, as the polls have not been very consistent. I have certainly seen more disagreement, but things are getting close enough where the variations start to make a difference. Accordingly, the forecasting model is unable to make a very precise estimate of likely outcomes tomorrow night: 20 to 77 seats for the NDP and 6 to 63 for the Liberals. This should take care of any Alberta-esque situation, but apart from that there is not much to glean from the forecasts.

More polls are expected to be released today, so hopefully this will make things more clear. Unless these final polls start to show some major shifts in the final hours of the campaign, I will have the final projection up on the site before midnight (ET) tonight to incorporate whatever polls emerge by the end of the evening. If these final polls are not clear as to what is going on, I may wait until the morning to see if any other surveys are released before midnight Pacific time to post the final projection. This is not my preferred option, however, as I much rather have my final projection numbers on the site before election day, if only to follow the spirit of the polling blackout laws in British Columbia.

Update: With all the late night polls I am expecting, I don't think I'll be able to get any numbers up before midnight Pacific time. As I am writing from Ottawa, trying to get the final numbers and an analysis posted within, at most, 90 minutes by 3 AM and also have it be coherent seems impossible. If the goal was to get something up before midnight and stay true to the spirit of the province's election laws, it does not make much difference if I post at 12:30 AM or 6:00 AM Pacific time. So, check for the final projection tomorrow morning. 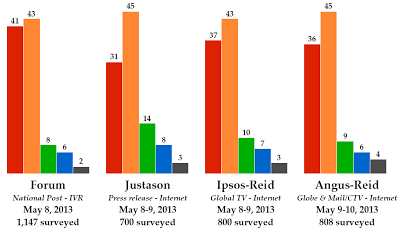 Friday afternoon was a polling smorgasbord, as surveys from four different firms were released in a matter of hours. Though they do show some broadly similar numbers, the polls were suggesting conflicting trends and had some of their own methodological issues to note. Let's go through them one-by-one.

Forum's poll for the National Post is the oldest of the lot, having been conducted on May 8. Just as they did with their previous survey, Forum suggests a much closer race: 43% for the NDP and 41% for the Liberals.

Compared to their last poll of Apr. 30, the NDP had picked up four points and the Liberals had gained six, as support for the Greens and Conservatives fell by four and three points, respectively.

The lower support for the Conservatives and Greens is not too surprising, as more British Columbians become aware of a lack of a candidate in their own ridings and as voters decide that this may not be the election for a protest vote. The narrow gap between the NDP and Liberals appears to be somewhat out-of-step, but sampling error could easily push the margin further apart without making the poll explicitly wrong.

But Forum did have the same issue that they had in their previous survey, under-sampling people who said they voted for the NDP in 2009. By Forum's numbers, 50% of people who said they could remember who they voted for in 2009 had voted for the Liberals, while only 32% had voted for the NDP (actual result: 45% to 42%). Granted, four years is a long time and memories of the federal election could be mucking things up a little, but this is likely why Forum is showing a narrower gap than the other firms. This should lead us to believe that the wider margins that the other polls have recorded are probably more realistic.

The gap of 14 points registered by Justason Market Intelligence may be too much on the wide side, however. The firm pegs NDP support at 45% and the Liberals at 31%, a drop of four points for the NDP since their last survey of Apr. 15-23, and a gain of four points for the Liberals. The trends are not very informative, however, as Justason seems to have used only their online panel for this survey, whereas their last poll used a hybrid telephone-online methodology. And since Justason was last in the field at an earlier time than Forum, Ipsos-Reid, and Angus-Reid, comparing the trends from this poll to those others is also not very helpful. But it is interesting to note that Justason is nevertheless recording a narrowing margin, and lower support for the Conservatives. That is indeed an important trend, particularly in terms of Liberal fortunes.

Ipsos-Reid's poll for Global News also showed a narrowing gap, with the NDP falling two points from Ipsos's Apr. 30-May 2 poll to 43%, and the Liberals increasing by two points to 37%. That shrank the margin from 10 points to six, but those changes in support are not statistically significant. The Greens and Conservatives were unchanged at 10% and 7%, respectively.

The last poll of the day, and the most recent, was by Angus-Reid for the Globe and Mail and CTV. It, however, showed a widening margin: the NDP was up four points to 45% and the Liberals were up two points to 36%. But here again the trends are difficult to assess. Angus-Reid changed their methodology to present respondents with an accurate local ballot. That means that people in ridings without a Green or Conservative candidate were not given that option.

Accordingly, the Greens fell three points to 9% and the Conservatives dropped four points to 6%. Was the gain that Angus-Reid recorded for the Liberals and NDP due to shifting support or the accurate ballot? We don't know, but this methodology should provide better results, which may lead us to believe that a margin of this size is more realistic than the one recorded by Forum.

It should be noted that these polls are not particularly contradictory. Having the NDP at either 43% or 45% and the Conservatives between 6% and 8% puts these firms well within each other's margin of error (assuming a probability sample, etc.). The Greens are a little less consistent, with between 8% and 14%, but somewhere around 9% is probably about right. The Liberal numbers are more problematic. With Justason's poll, the difference is 10 points among these four surveys. Even without it, the difference is five points. That is stretching the MOE.

Putting aside the province-wide numbers for a moment, are there any other under-lying trends across the Forum, Ipsos, and Angus-Reid polls (as noted, Justason's previous poll was not in the field at the same time as the last poll of these three firms)?

Regionally, they all show generally stable numbers in metropolitan Vancouver. All three put the NDP at either 44% or 46% and no different than one or two points from their last poll. The Liberals were at either 38% or 41%, with Forum showing the bigger uptick. All three polls showed the NDP with a good lead over the Liberals on Vancouver Island (the Liberals were tightly grouped at either 29% or 32%), and all three showed a drop in Green support (two points for Ipsos, four for Forum, and six for Angus, though all are ostensibly within the MOE). Ipsos and Angus put the NDP and Liberals about even in the Interior and North, but Forum put the Liberals way ahead. What is going on there is less clear.

What about demographically? All three showed a gender gap, but of different magnitudes. Angus-Reid had the NDP up by three points among men, Ipsos-Reid had the Liberals up by four, and Forum had them up by 11. Among women, though, all three had the NDP at either 14 or 15 points over the Liberals. By age group, both Ipsos and Angus had the New Democrats ahead among the oldest (and most enthusiastic) voters, but Forum gave the edge to the Liberals.

So, for all the new polling data we have it would appear that we are left with more questions. Is the margin between the Liberals and New Democrats narrowing, widening, or holding steady? Is the NDP poised for a landslide, or tight win, or a shock? Hopefully the polls to be released within the next 18 hours will clear things up. I have a hunch, though, that they may just confuse us more.
Posted by Éric at 9:22:00 AM