The following are ThreeHundredEight.com's final projections and forecasts for the 2013 provincial election in British Columbia, scheduled for May 14, 2013. These numbers were last updated on May 14, 2013, and reflect the best estimates as of May 13, 2013, the last day of polls included in the model. You can click on all of the charts below to magnify them. 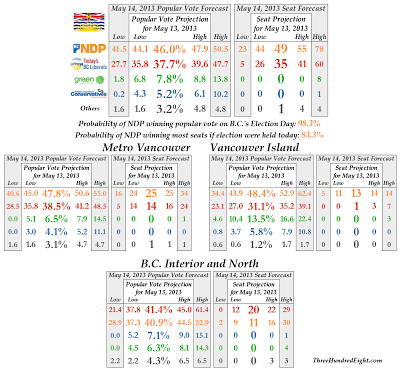 A detailed explanation of the vote and seat projection models and how the probability forecasts are calculated can be here.

The projections are subject to the margin of error of the polls included in the model, as well as the inherent inability for the projection model to make perfect estimations of real-world dynamics. The projection ranges are a reflection of the degree of uncertainty intrinsic in polling, while the ranges in the forecast are a reflection of the plausible amount of change in support that can be expected between now and the election, as well as the error that polls have made in the past. The probabilities are based on the past performances of the projection model and of how polls have differed from election results in the past, with consideration being made for the amount of time between the polls being conducted and the election being held.

The following chart lists the polls currently included in the projection model, as well as the weight each poll carries. 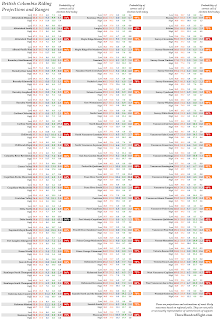 The following chart tracks the projection, projection ranges, and forecast ranges over time. The chart includes a legend on how to read it. 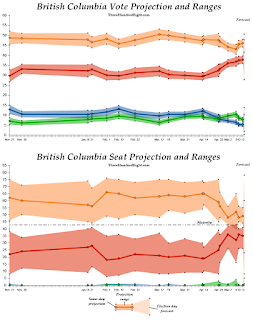 The next chart tracks the regional vote projections, without also tracking projected ranges or forecasts. It is best used a means of looking at voter trends as suggested by the polls in each region as the election approaches. 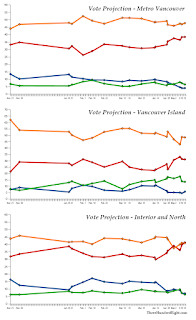 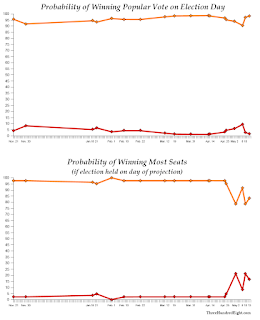 This chart shows the unadjusted poll averages, weighting only for date, sample size, and track record of polling firm. Unlike the site's projection, these averages do not penalize the Greens and Conservatives or estimate the support for independents and other parties. 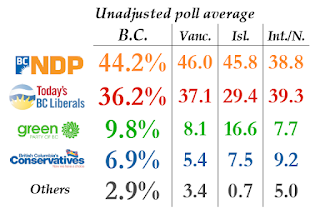 This next chart tracks the polls that have been released since the beginning of April, with each dot representing the result of a poll that was in the field on that day. 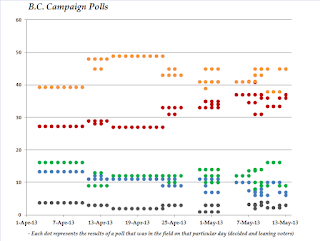 This last chart is tracks a rolling three-poll average of approval ratings of the four leaders and scores on the question of who is the best choice to be Premier. The leaders are: Christy Clark (Liberals), Adrian Dix (NDP), John Cummins (Conservatives), and Jane Sterk (Greens. 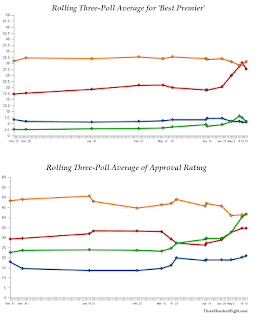