Ontario Liberals competitive again, but majority seems out of reach

The Ontario Liberals have avoided defeat with the budget support of Andrea Horwath's New Democrats. The polls suggest that an election was not something that Kathleen Wynne had any particular reason to fear, as her party has been in a tie with the Progressive Conservatives in four of the last six provincial surveys and the New Democrats, though still polling above their 2011 election result, have settled into third place.

But while she has kept her party in a position where they can reasonably hope for re-election if a campaign goes well enough, there are some indications that Wynne has not been able to rebuild some of the bridges that were burnt in Dalton McGuinty's last campaign as Ontario leader.

Though the Liberals lost seats throughout the province in 2011 (three each in northern and central Ontario, two in eastern Ontario, and one seat in each of the Toronto, GTA, and Hamilton/Niagara regions), their majority government was primarily lost in southwestern Ontario. In that part of the province, the Liberals lost eight seats that had been theirs at dissolution. It was the region that had the largest numbers of errors in the 2011 projection, suggesting that the OLP had lost disproportionately in the region.

If the Liberals are to have a plausible hope for something more than a squeaker majority, they need to re-gain ground in the southwest. The first real test of whether Wynne can win in the region will come when by-elections are held in London West and Windsor-Tecumseh, probably within the next two months.

The chart below shows how the parties have been polling in southwestern Ontario since the 2011 election. This morning's Forum Research poll has not been included since the report is not yet on their website. 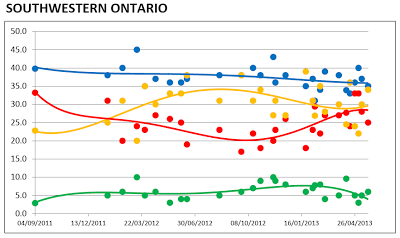 Certainly, Wynne has managed to improve Liberal fortunes in the region as she has done throughout Ontario, at least compared to the trough the Liberals found themselves in around the time McGuinty announced his plans to resign as premier. But in no poll has the party improved upon the 33.2% of the vote they took in the region in 2011.

Meanwhile, the Progressive Conservatives have only been on an incremental decline (though some surveys have bettered their 39.8% election result) while the New Democrats have made important gains. This means that the Liberals are in no position to win back the seats they lost, and could be put under even more pressure in some of the ridings they currently hold where the New Democrats have a good base.

How might the Liberals have performed in the southwest if Windsor's Sandra Pupatello had won the party's leadership race? She might have given the OLP the boost needed in the region to grapple back some of those lost seats. But at what cost? Wynne seems to have been the best choice the Liberals could have made to solidify their Toronto base. The OLP was in serious trouble of losing the favour of Torontonians to the benefit of the New Democrats, who had moved ahead in the city in some polls at the end of 2012. But after Wynne became leader, the Liberals soared in Toronto and are currently polling at or above their election result of 47.3%.

This gives the Liberals a very solid base of some 17 seats in the city, and with the New Democrats taking a hit they could even wrest away a couple more from the NDP. Some of that surge in support is spilling over into the GTA, giving the Liberals another dozen or so seats they can count upon. With roughly 30 safe-ish seats in and around Toronto, it puts the Liberals in a strong position to challenge for re-election.

But that is where their numbers in southwestern Ontario and the other corners of the province come in. The latest poll from Ipsos-Reid suggests that the Liberals trail in central Ontario by five points and in eastern Ontario by 10, in addition to their deficit in the southwest. The Liberals are still very competitive in northern Ontario, which puts a few more seats into their column, but they are a long way from being in solidly majority territory. Recent moves about investing in public transportation for the Greater Toronto and Hamilton area may help bolster Wynne's support in that region, but will do little to boost Liberal support outside of the metropolitan area. There is even the potential for push back if the perception is that the Liberal government is raising the taxes of Ontarians outside of the GTA to pay for Toronto's public transportation (despite the current proposals only calling for tax increases in the GTHA itself).

This is why the by-elections in London West and Windsor-Tecumseh have inflated importance. As a test of the Liberals' ability to hold on to seats outside of Toronto under their Torontonian leader, the results will help determine whether Wynne has what it takes to win an election campaign provincewide. If the Liberals win both of the by-elections, the opposition parties may not be inclined to defeat the government in the autumn, and might wait to re-assess their chances in the spring of 2014. If the Liberals lose one or both of them - and in particular to the NDP - we may find ourselves in another campaign when the leaves start to fall.
Posted by Éric at 10:18:00 AM