A poll by Ipsos-Reid for the provincial election in British Columbia had some comparatively good news for Adrian Dix and the B.C. New Democrats, as it put his party 10 points up on the B.C. Liberals - a more comfortable margin than the three other polls that have been released since last week's debate. As a result, Dix has a more comfortable lead over the Liberals in the projection, and the likely ranges now put him entirely in majority territory once again.

The New Democrats are now projected to have between 42.1% and 46.1% of the vote, giving them between 43 and 56 seats. More precisely, they are currently projected to take 44.1% of the vote and 48 seats. The Liberals are between 34.1% and 37.9% and between 26 and 42 seats, or 36% and 36 seats more specifically. These ranges are also positive for Dix: his party leads in fewer close ridings than those in which it trails.

The Greens and Conservatives have dropped a little to 9.6% and 7.1%, respectively.

Ipsos-Reid's poll suggests that the gap between the two parties has closed, but sets off a few fewer alarm bells than the polls from Forum, Insights West, and Angus-Reid. But a narrowing gap was expected.

The chart below updates an article I wrote for The Globe and Mail before the B.C. campaign had kicked off. It originally showed that the margin the NDP had over the Liberals was greater than the one the Liberals had in the last two elections, and that it was holding relatively steady. But as you can see, the margin has closed very quickly and in a more dramatic fashion than in either 2005 or 2009. 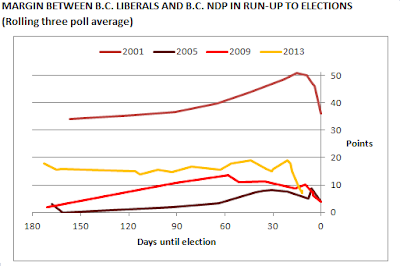 The lead is now less than the one the Liberals had at this stage of the 2009 election, but larger than the margin of the 2005 election. But you can also see that the trends are not always exactly linear. In both 2005 and 2009 the Liberals had a bit of an uptick before the gap closed again.

And it needs to be noted that the last, steep closing of the gap in 2001, 2005, and 2009 were primarily due to errors and/or late movement between the last polls of the campaign and election day. And in every case, those errors and late swings were to the advantage of the B.C. New Democrats. We will find out whether this phenomenon is exclusive to the B.C. Liberal Party or just the party that is leading the polls next week. 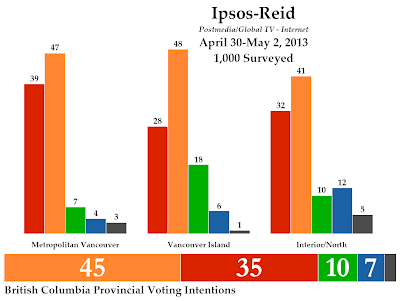 Ipsos-Reid was last in the field Apr. 11-14, and since then the NDP dropped three points to 45% while the Liberals increased by six points to 35%.

The Greens were up one point to 10% and the Conservatives were down four points to 7%.

That gain by the Liberals is significant, but Ipsos is also judging Conservative support to be lower than in other polls - and probably more realistically.

Unlike the Angus-Reid survey, Ipsos-Reid finds the gender gap to still be in place: the two parties were tied among men while the NDP had a 20-point advantage among women (!). Also of note is that, according to the poll, roughly 1-in-4 supporters of the Green and Conservatives parties say they could change their mind by election day. But unless Christy Clark starts picking in the pockets of the NDP, they would need about 60% of Green and Conservative supporters to change their mind and vote Liberal in order for her to close the gap entirely.

Regionally, Ipsos-Reid shows the same sort of numbers that the other firms recorded in Vancouver and on Vancouver Island. It appears that on the island the Greens have stopped making gains. But in the Interior and north, Ipsos-Reid still gives the NDP the edge. Angus-Reid, Insights West, and Forum all gave the nod instead to the Liberals. Much of the election will be decided here.

The next round of polls could be very revealing. When you look at the chart showing how the gap has closed in other elections, you have to believe that, if the polls continue to show gains for the Liberals, Clark would have a very good chance of pulling off a big upset next week (and if she does, we'll never hear the end of the "polls having been wrong", rather than the reality of minds having changed over the course of a campaign). But if the polls instead show little change in the numbers, one might conclude that Dix will be able to hold on and win. There isn't much time left for another lurch in the polls.
Posted by Éric at 10:10:00 AM