The B.C. Liberals continue to make modest gains as the campaign progresses in British Columbia, and though their odds of winning the popular vote on May 14 have increased, those still stand at only 4.6%. But the volatility in the polls have increased considerably, making it more difficult to estimate where the parties will end up on election night.

The projected ranges have decreased since Monday's update due to more polling data being available, with the B.C. New Democrats at between 44.2% and 49.4% of the vote and the Liberals at between 30.8% and 35.6%. That gives them 48-66 and 16-36 seats respectively, with the most likely outcome being 56 and 28 seats apiece. That is a drop of three seats for the NDP from Monday's update, which decreases their chances of winning the most seats to 95.2%, if an election were held today.

But the forecasted ranges for May 14 have increased dramatically. The NDP could take between 40.8% and 52.8% of the vote and the Liberals between 27.2% and 39.2%. Drilled down to the regional level, where fluctuations have been even larger, this gives the NDP between 18 and 83 seats and the Liberals between 1 and 64. In other words, anything could potentially happen.

The potential is not particularly strong, though, but the possibility exists. The model is designed to increase its uncertainty of a future event when the polls show less consistency, and that is starting to occur.

That means the model considers a great deal of movement to be possible between now and election night, making the seat forecast as wide as it is. By comparison, as recently as the forecast for Apr. 14 the estimated margin of error in the polls was actually larger than the discrepancy between province-wide polls for the Liberals.

Unless the polls start to agree with one another more, it is possible that the forecasted ranges will remain as wide as they are straight through to election day. That would be unfortunate, as it lessens the usefulness of the estimates, but in forecasting the choice often has to be made between precision and accuracy. A model that is more precise is not necessarily more accurate. Consider the forecasted ranges, then, as an absolute best and worst case scenario if another Alberta-level event occurs. Hopefully the polls will tighten up. 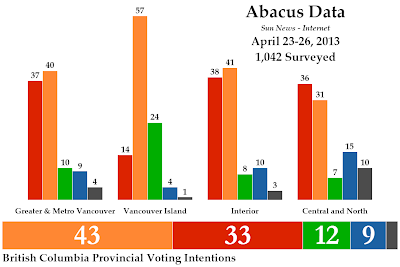 This latest update was driven by a new poll from Abacus Data. The firm has not delved into British Columbia before, so there is no baseline with which to compare these numbers. They are broadly in-line with what other firms have shown, however, and suggest that the lead the New Democrats have over the Liberals could potentially be narrowing.

The demographic breakdowns give more credence to the results as they are also consistent with what other surveys have shown: a four-point edge for the NDP among men but a 16-point advantage among women. The New Democrats even lead among those aged 60 and over, otherwise known as 'voters'.

The poll has some other interesting tidbits. The B.C. Liberals are getting a majority of federal Conservative and Liberal support, but not enough of it as 18% of federal Tories are voting NDP and 30% of federal Liberals are as well.

If we remove the undecideds, however, we get a look at the absolute ceilings for each party: 61% for the New Democrats, 52% for the Liberals, 45% for the Greens, and 32% for the Conservatives.

Regionally, Abacus is showing a closer race in and around Vancouver (which for them stretches out to Chilliwack) while the race in the Interior and Central/North is also very close. On Vancouver Island, the NDP is dominating and the Greens are 10 points up on the Liberals. Interesting numbers.

Also interesting are Abacus's ratings of the leaders, which show British Columbians to be somewhat less upset with Christy Clark than other surveys have suggested. Abacus measured favourability, rather than approval (which are two different things), and found Clark to have a higher favourability rating than Adrian Dix (barely, at 24% to 23%). But her unfavourability was much higher, at 42% to 35%. Only 6% said they had a favourable opinion of John Cummins.

On several issues, Dix and Clark were actually very closely rated. The margin was no larger than a statistically insignificant handful of points on the questions of qualifications, judgment, and likability. But Dix did much better than Clark on being able to understand B.C.'s problems and having a clear vision for the province, whereas Clark scored higher than Dix on being style over substance and out of touch. That hurts her.

In the coming days, the first post-debate polls will be released. Though most surveys seem to have given the debate to Dix, it will be interesting to see whether it will have an effect. Any changes may have less to do with Clark and Dix than with Cummins and Sterk. Do they get a boost or does one or both of them drop, to the benefit of the other parties?
Posted by Éric at 9:11:00 AM