Trudeau Liberals ahead in Ipsos poll

With the election in British Columbia coming to a close in less than a week, I haven't had an opportunity to look at the federal polls that have been conducted both just before and since Justin Trudeau was named the new Liberal Party leader. But let's take a look at the latest poll from Ipsos-Reid for Postmedia and Global TV. 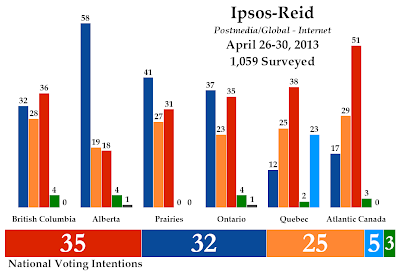 Ipsos was last in the field Mar. 28-Apr. 2, and was already capturing a big uptick in Liberal support as the leadership campaign was coming to a close (and no, that last Ipsos-Reid poll was not a "with Trudeau as leader" survey as the Postmedia report on the poll implied). Since then, the Liberals picked up another three points to move ahead with 35%. The Conservatives were up a single point to 32%, while the New Democrats were down two points to 25%.

The Bloc Québécois and Greens each dropped a point to 5% and 3%, respectively.

Ipsos-Reid uses an online panel now, so margins of error don't apply. Ipsos uses a 'credibility interval' which is an interesting approach, and in any case is probably about as legitimate as the standard margin of error applied to telephone and IVR polls that don't exactly build perfectly random samples anymore either. But if this was a probability sample, the changes since their last poll would fall within the margin of error. However, the trends have been visible across other polls as well so the reality of a Liberal surge since Trudeau was named leader is pretty well established.

(Note: This poll was released only yesterday, on May 7, but will count towards the April poll averages when I calculate them. This is why I have to wait at least a week before doing so!)

Interestingly, the Liberals held a seven-point advantage among women while they were tied with the Tories among men. Also of note is that the Liberals were ahead of the Conservatives among all age groups - even the 55+ cohort that has supported the Conservatives in recent years and which turns out to the ballot boxes in the largest numbers.

At the regional level, none of the shifts of support seem to be outside of a statistical wobble but again the trends are clear.

The Liberals led in Atlantic Canada with 51%, trailed at length by the NDP at 29% and the Conservatives at only 17%. Their vote has absolutely collapsed east of the Ottawa River since Trudeau emerged as the next leader of the Liberals.

The Liberals were also ahead in Quebec with 38% to 25% for the NDP, 23% for the Bloc, and 12% for the Conservatives. This further confirms the advantage given to the Liberals in the province in recent surveys by Harris-Decima and CROP.

In British Columbia, the Liberals had a narrow edge over the Conservatives with 36% to 32%, with the NDP at 28%. Whether or not this is spill-over from the provincial campaign is impossible to say. We may have to wait until June to have a better idea of the federal situation in British Columbia.

With these levels of support, the Liberals and Conservatives could tie in the seat count with 130 apiece. This is in large part due to the edge that Ipsos-Reid gives the Tories in Ontario, which still gives them a comfortable plurality of the seats in the province.

The New Democrats would place third with 60 seats, with more MPs from Ontario than Quebec. The Bloc Québécois would win 18 seats and re-acquire official party status. They mostly achieve that by default, however. The Liberals have too small of a base in francophone Quebec to be given more seats in the projection model (a potential flaw that will need to be looked into by 2015), and so the NDP falls behind the Bloc in a lot of seats.

So, I guess we can all expect a minority Liberal government under Trudeau in two years' time, then? Not really. These polls between elections are always derided as meaningless for some reason, as if they are about predicting the next election's outcome rather than indicating what people think of their political leaders right now. Dismissing them is akin to dismissing evidence in order to rely on your gut. These polls are about what the situation is right now, and where it will go from here next week, then next month, then next year, and then in the next election. It is an on-going story that is being told, not an attempt to skip to the end of the book.

And there is a story being told here. Is it the story of a Liberal revival? Not necessarily, but if Trudeau had won the leadership and his party's numbers had only been boosted to 25% or so from the 19% they took in the last election, there would be good reason to doubt the ability of the party to make a comeback (even that bump would be along the same lines as those that Stéphane Dion and Michael Ignatieff experienced). Instead, we see that a sizable number of people (enough to win an election) are willing to give the Liberals, and Trudeau, another chance. Will they still be willing to give them that chance in 2015? This poll isn't telling us anything about that. But it is telling us that Canadians are open to the possibility right now. Poll-watchers, as I and all of you who read this site are, know that this is information that is far from meaningless.
Posted by Éric at 10:44:00 AM