Environics released a new poll earlier this week, showing that the New Democrats continue to hold a narrow lead over the Conservatives, mostly unchanged from their last poll of May 7-9. But a sub-regional breakdown provided to ThreeHundredEight shows that the NDP is running away with things in Newfoundland and Labrador - and struggling in Saskatchewan. 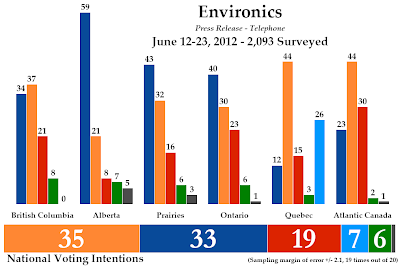 Compared to Environics' last poll, the NDP is down one point to 35% while the Tories are up one to 33%, an insignificant shift even on a large sample size such as this. The Liberals are unchanged at 19%, while the Bloc stands at 7% and the Greens are down one to 6%.

The Conservatives are up four points in Ontario to 40%, while the NDP is down two to 30%. The gap stands at 10 points, but that has been bouncing around from poll to poll. The Liberals, down three to 23%, have been struggling in most surveys.

In Quebec, the New Democrats are down one point to 44% and the Bloc Québécois is up one to 26%. The Liberals are up two to 15% and the Tories are down three to 12%, none of these being very significant changes in support.

The gap has narrowed in British Columbia, where the NDP is down six points to 37% and the Tories are up five to 34%. The Liberals are well behind the pack with 21% (+1), while the Greens are down two points to 8%.

Alberta and the Prairies are standard fare, while the NDP is up 13 points in Atlantic Canada to 44%. The Liberals are up 10 to 30%, while the Conservatives are down 15 to 23%. These wild swings are likely statistical noise, but the sample is more robust than usual: Environics over-sampled the region to get useable Newfoundland numbers (but of course, those were scaled back to represent an accurate weight within the region).

None of these regional results are remarkable, they generally line-up with what most other polls show to be the case. But the sub-regional results are fascinating, giving us a look at the country's three largest cities (and their metropolitan areas), how the vote breaks down in the Prairies, and where things stand on the Rock. 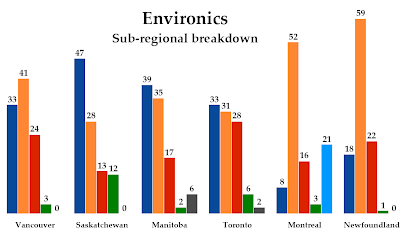 We shall start out West, where the New Democrats lead in Vancouver with 41%, putting them ahead of the Conservatives by eight points. The Liberals stand third with 24% support in and around the city.

Moving to Saskatchewan, we see that the NDP is not doing as well in the province as has been expected. Most of their gains in the Prairies appear to be heavily weighted to Manitoba, where the race is quite close.

In Saskatchewan, the Conservatives are down nine points from the election to 47% support, but the New Democrats have slipped four points to 28%. This does not put them in range of winning any seats, maintaining the status quo of 13 Conservatives and one Liberal (they are up four points to 13% in the region). The Green result, at 12%, is probably too high, but it is difficult to know for sure where those votes might go.

The Conservatives have dropped 15 points in Manitoba to 39%, while the NDP is up nine points to 35%. The Liberals, meanwhile, are steady with 17% support. This would likely deliver four seats to the NDP and one to the Liberals in the province, with the remaining nine going to the Tories. That is down two seats for them.

In Toronto, the race is a close one: the Conservatives have 33% support, the NDP has 31%, and the Liberals have 28%. This suggests that the NDP is starting to breakthrough into the outlying suburbs of Toronto, but that the Liberals are still a force in the city.

The NDP is running away with it in Montreal, where they have 52% support. The Bloc is the runner-up with 21%, putting them narrowly ahead of the Liberals. They have 16% support, much of that undoubtedly concentrated on the West Island. The Tories are completely out of the race with 8% support in the area.

And that brings us to Newfoundland and Labrador. The sample for the province isn't huge, with an MOE of just under eight points, but it is large enough to give us an idea of what is going on. I'm also told that a larger sample has backed up these results. Environics puts NDP support in Newfoundland and Labrador at 59% support, up an amazing 26 points since the election. The Liberals are down 16 points to 22%, while the Tories are down 10 points to 18%. With this sort of swing, the New Democrats could win four seats in the province, with the Liberals barely holding on to three. 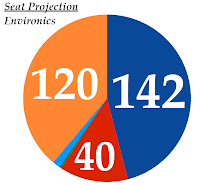 On these numbers (excluding the city and NL results, however), the Conservatives win 142 seats to 120 for the NDP and 40 for the Liberals. The Bloc would win five seats and the Greens would retain one.

The Tories win 17 seats in British Columbia, 27 in Alberta, 22 in the Prairies, 70 in Ontario, three in Quebec, two in Atlantic Canada, and one in the North. As usual, it is the combination of the West and Ontario that keeps the Conservatives on top.

The NDP wins 13 seats in British Columbia, one in Alberta, four in the Prairies, 25 in Ontario, 60 in Quebec, 16 in Atlantic Canada, and one in the North.

The Liberals win five seats in B.C., two in the Prairies, 11 in Ontario, seven in Quebec, 14 in Atlantic Canada, and one in the North.

As mentioned, the top-line and regional numbers add to the general picture that is forming about where the parties stand throughout the country. But the sub-regional ones paint a slightly different landscape. While caution must be used with the small samples, they suggest that the NDP is not making the inroads it needs to make in Saskatchewan and that the party is poised to do exceptionally well in Newfoundland and Labrador. The Conservatives are still in play in Vancouver and Toronto, but are being challenged more and more in the Ontario capital.

Environics gives us some interesting numbers to mull over the Canada Day weekend.
Posted by Éric at 4:03:00 PM