Steep drop in support for Redford and Alberta Tories

New numbers from a Léger poll for the Calgary Herald and the Edmonton Journal show the Alberta Progressive Conservatives suffering a significant drop in support since the fall. But that is nothing compared to the fall in approval ratings experienced by Premier Alison Redford. 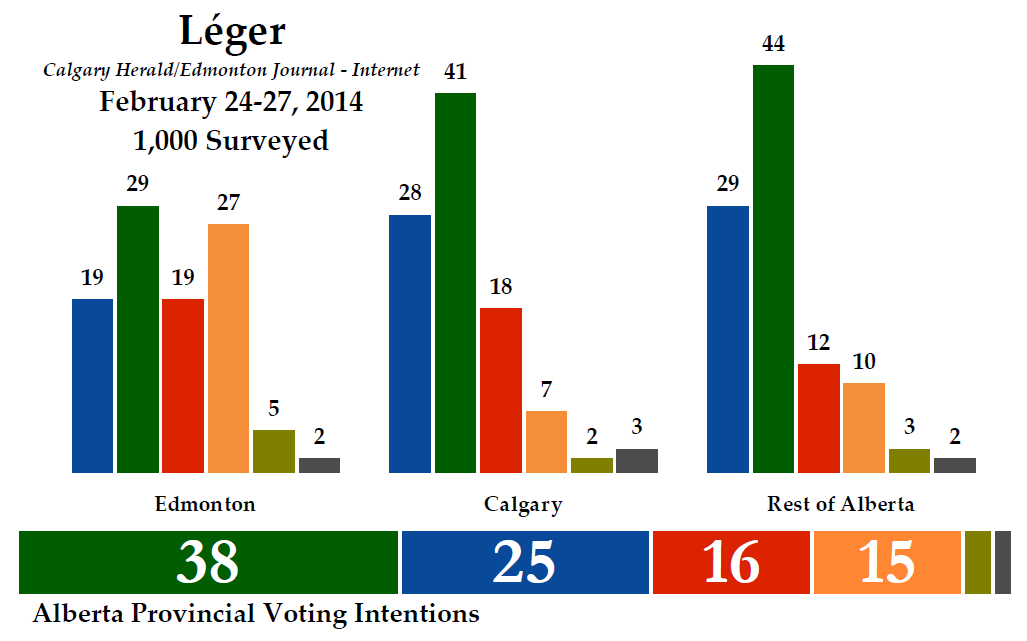 Léger was last in the field in mid-October, when the Tories and Wildrose were in a very tight race. But since then, the PCs have dropped by six points to just 25%, while Wildrose has increased by five points to 38%. These shifts would be statistically significant with a probabilistic sample of this size (the poll was done online, however).

The Liberals were down two points to 16%, while the New Democrats were up one point to 15%. Support for the Alberta Party stood at 3%, while 2% of Albertans said they would vote for another party. Of the entire sample, 24% was undecided.

These are horrible numbers for the Progressive Conservatives. They have now dropped in four consecutive Léger polls going back to January 2013, when the party was at 40% support. The score of 25% is the worst the Tories have managed in any poll since November 2009. Wildrose has been the major beneficiary, though it should be pointed out that since April 2013 the party has been polling in a relatively tight band of between 33% and 38% support.

In Calgary, Wildrose led with 41%, while the Tories were down to 28% and the Liberals were steady at 18%. The NDP had 7% support in the city.

In the rest of Alberta, Wildrose increased to 44% and the Tories dropped to 29%, expanding the gap between the two parties by 10 more points. The Liberals and NDP were at 12% and 10%, respectively.

Due to a very inefficient vote in the two major cities, the PCs would be reduced to third party status with these levels of support. Wildrose would win a majority with 58 seats, virtually sweeping Calgary and the rural parts of the province. The Liberals would win 11 seats, 10 of them in the two main cities, while the NDP would win nine seats, almost all of them in Edmonton. The Tories would be reduced to just nine seats as well, generally divided between the three regions of Alberta.

(Yes, we all remember the results in 2012. But the model performed well when the actual numbers were plugged into it - in other words, if Léger's poll matched an election's results exactly, these seat estimates would turn out to be quite close to the actual result. A two-seat margin between the Liberals and PCs/NDP, however, is hardly decisive.)

The major problem for the Progressive Conservatives appears to be Redford herself. Her approval rating (Léger last inquired about this in September 2013) dropped 12 points to just 20%, among the worst numbers put up by a sitting Alberta premier in recent memory. Her disapproval rating was up 12 points to 64%, and just 35% of PC voters from 2012 said they approved of her performance. That is ghastly.

Raj Sherman of the Liberals had an approval/disapproval rating of 29% to 28%, with Brian Mason of the NDP enjoying a 32% to 23% split (the best net rating of the four leaders). Among their 2012 voters, Sherman's approval rating was 68% and Mason's was 78%.

But Redford is not less popular than her party (among decided respondents, her approval rating was 24%) so it is unclear if her resignation would change things. It is clear, however, that she is a big reason for the dramatic decline in support for her party over the last year. In a little more than 12 months, she has lost almost two out of every five supporters. And the timing is certainly bad, as Smith and Wildrose move more towards the centre-right. Unless Redford can somehow turn things around, or if she is replaced by someone that can give the Tories new life (difficult after 43 years in office), the stars may be aligning for a change of government at the next election. And then, one assumes, we can expect several decades of Wildrose dominance. That is just Alberta's way.
Posted by Éric at 11:03:00 AM