Redford up as PCs close on Wildrose

The Calgary Herald reported on the latest numbers from Léger Marketing for the provincial scene in Alberta over the weekend, showing that the governing Progressive Conservatives and the opposition Wildrose are nearly tied, as Premier Alison Redford's approval rating experiences a significant uptick. 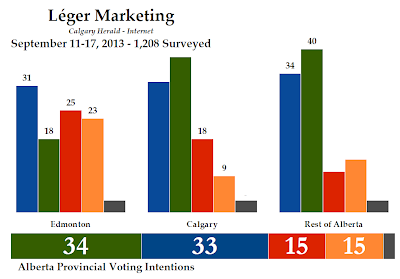 Léger was last in the field in mid-April and since then the PCs have picked up four points to come to within a point of Wildrose with 33%. Danielle Smith's party has dropped three points to 34%, while the Liberals were down two points to 15% and the New Democrats were up one point, also to 15%.

None of these shifts were outside the margin of error, or would be if this was a probabilistic sample (Léger has moved to an online panel for its Alberta polling - they used live-callers in the 2012 election). About 22% of the entire sample was undecided.

For the Progressive Conservatives, this is a bit of a comeback as they had taken a serious hit earlier in the year. The New Democrats seem to be a on a roll as well, going from 13% in Léger's January poll to 14% in April and 15% now. That is still within the margin of error but the trendline is positive for the NDP.

The report in the Herald contained partial regional results. The ones that were mentioned are identified with numbers in the chart above. The bars without a number are my own estimates, though the report in the Herald does mention a six-point lead for Wildrose in Calgary, which is also replicated outside of Calgary and Edmonton.

Update: A commenter has pointed out that the regional results were tweeted out by one of the Herald's reporters. The missing information for Calgary is 38% for Wildrose and 32% for the PCs, exactly the same as my estimate. In the Rest of Alberta, the NDP was at 15% and the Liberals at 8% (I estimated a 13-10 split above).

Edmonton remains the most hotly contest part of the province, with the PCs leading at 31%, followed by the Liberals at 25%, the NDP at 23%, and Wildrose at 18%. They dropped nine points in the city.

Using the available regional data, and making inferences for the unavailable numbers, the model gives 40 seats to Wildrose and a minority government. The Progressive Conservatives would take 28 seats, while the Liberals would win 11 and the NDP would take eight.

Wildrose wins almost all of its seats outside of Edmonton, while the Progressive Conservatives win more than half of theirs in Edmonton. The Liberals take 10 of their 11 seats in the two cities, while the NDP wins seven of their eight in the provincial capital.

The real movement in this poll, however, was Redford's. Her approval rating jumped six points - outside of the margin of error - to 32%, while her disapproval rating fell eight points to 52%. That still puts her behind Smith, though, whose approval rating improved to 41% against 37% disapproval. Raj Sherman of the Liberals and Brian Mason of the NDP had an approval rating of 30% apiece, generally where they have been throughout 2013.

The cause of Redford's increase appears to be linked, in part, to her handling of the flooding in the province earlier this year. Fully 84% of respondents rated her handling of it from fair to excellent (50% good or excellent). It seems to have helped regain some trust, though her party is still hobbled.

The next election is almost three years away, however, so the Progressive Conservatives have plenty of time to right the ship and continue their generations-spanning hold on government. But Smith remains popular. If she can get her party looking government-ready and avoid the mistakes of the 2012 campaign, she should still be a real threat to the Tories in 2016.
Posted by Éric at 11:10:00 AM