Breaking down the Sudbury results

The provincial by-election in Sudbury culminated in a somewhat anti-climactic fashion, with Glenn Thibeault (the NDP MP turned Ontario Liberal) prevailing by a little more than six points over the NDP's Suzanne Shawbonquit. The wildcard in the race, Andrew Olivier (the Ontario Liberal turned independent), took less of the vote than expected. But was he really a spoiler?

Let's first take a look at the shift in vote share since the 2014 provincial election. 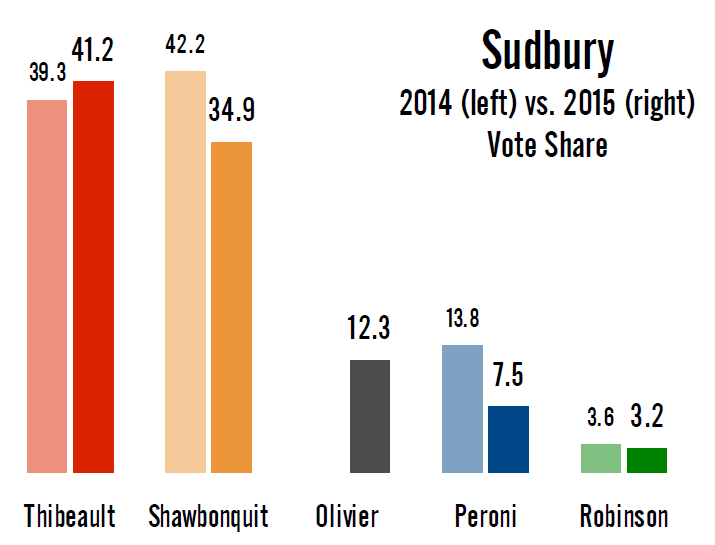 Thibeault captured 41.2% of the vote, increasing his party's share by 1.9 points. Shawbonquit finished with 34.9%, a drop of 7.3 points over the NDP's victorious performance in 2014.

Olivier took 12.3%, not a bad performance by an independent candidate, but well below expectations.

The Progressive Conservatives' Paula Peroni saw her vote share (she ran last time as well) fall 6.3 points to 7.5%, while the Greens' David Robinson was down 0.4 points to 3.2%.

On the face of it, it would seem that Olivier drew votes from the NDP and the PCs, suggesting he could have been a spoiler for the NDP. But the New Democrats would have had to hold virtually all of their vote to beat Thibeault, a tough assignment considering that many Sudburians used to voting for Thibeault the New Democrat might have been willing to vote for Thibeault the Liberal. 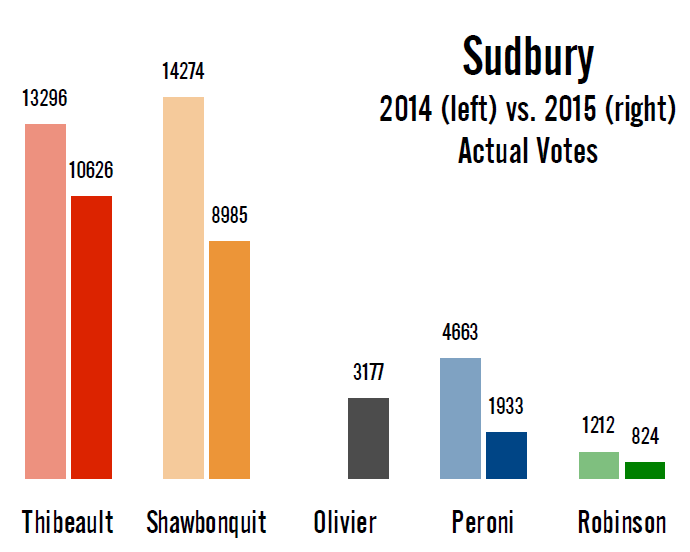 In terms of actual votes, no party made any gains. The total number of voters dropped by some 8,000, as turnout fell to around 34%.

Overall, turnout had dropped to about 76% of what it was in 2014. That means Thibeault outperformed that baseline, retaining 80% of the votes that the Liberals took in 2014.

Robinson retained 68% of 2014 Green voters, while Peroni retained just 41%. The problem for the NDP was that Shawbonquit retained 63% of her voters, when she needed at least 74%. In other words, the NDP just needed to tread water in order to hold off Thibeault, but they disproportionately lost voters, and so the by-election.

Was Olivier the cause? Quite possibly. If the number of votes cast had dropped uniformly across the board due to falling turnout, Shawbonquit would have won with about 10,900 votes and a lead of 700 or so over Thibeault. Instead, she under-performed that mark by about 1,860 votes. Peroni also under-performed, by about 1,610 votes. In total, these two parties took about 3,470 fewer votes than they should have, all else being equal. Perhaps not coincidentally, Olivier captured 3,177.

Just looking at the math, it doesn't seem like many Liberals went over to Olivier's camp. Undoubtedly some did, but they were more than made up for by New Democrats and PCs who voted for Thibeault. It seems more likely that Olivier drew support from the NDP, reducing their chances of victory. Or, at the very least, he did not draw enough Liberals to make up for the number of New Democrats who followed Thibeault across the metaphorical aisle.

Mixed results for the by-election polls

Polling in by-elections is risky business. It becomes even riskier when word that the OPP believes the Liberals did something under-handed to try to get Olivier out of the race drops on election day.

It is impossible to know the effect that news might have had on the outcome. Many voters may not have heard the news when they cast a ballot - certainly those who voted in the advanced polls, and potentially most of the voters who cast a ballot on election day itself (not everyone checks the news as frequently as you or I may). And maybe even the news wouldn't have had much of an effect, merely confirming what people were already thinking. In the end, the OPP appears to be looking at some individuals within the Liberal Party, not Glenn Thibeault. Voters may have compartmentalized the two - something they probably would not have been able to do if Thibeault wasn't already a known quantity.

So that is one thing to keep in mind when looking at how the polls performed. Another thing to keep in mind is the effect of the polls themselves. All of the polls over-estimated Olivier's support. Might voters who were aware of the polls have decided to cast a ballot for one of the two front runners, rather than the all-but-guaranteed third place finisher? Lastly, even the most recent polls were out of the field on Monday, three days before election day in a topsy-turvy campaign. So, some mitigating factors.

Nevertheless, none of the three final polls published in the last stages of the campaign did particularly well. But two of the three did correctly identify the winner.

Mainstreet Technologies had the smallest amount of error, totaling 14.1 points for the five major candidates (or 2.8 per party). Mainstreet had the gap at five points, close to the 6.3-point gap that actually occurred. But the results for Thibeault, Olivier, and Peroni were all outside the margin of error for the sample of decided voters (and taking into account the estimated support of the each candidate). However, the story Mainstreet's poll told was closest to the truth.

Forum Research's poll had only a little more absolute error, but the story it told was false. Two of Forum's three polls throughout the campaign had Shawbonquit ahead of Thibeault, including the last one.

Oraclepoll Research had the largest degree of total error at 20.1 points (or four points per party). But it has to be rated ahead of Forum for not having pushed the narrative of a very, very close race that the NDP had better than even odds to win. Oraclepoll always had Thibeault ahead, and he ended up winning.

Oraclepoll was the only firm to get Thibeault's score within the margin of error, as well as Peroni's. But the results for Shawbonquit were well off the mark, as were Olivier's. Note, however, that Oraclepoll was out of the field the earliest of the three. It finished polling on Saturday.

So, not exactly a terrific performance by any pollster. At the same time, however, the polls were far better than what we have seen in some other by-elections. Mainstreet and Oraclepoll both said Thibeault would win, and he did. Forum said the race would be close, and it wasn't a landslide. I think, considering the drama of the campaign and the amount of time between the final polls and the results, we can give the polls a passing grade.
Posted by Éric at 12:02:00 PM