The projection was updated yesterday, reversing the first instance of the Conservatives leading in both the vote and seat projection. The Liberals are now back on top in the polling average, and have closed the gap in the seat count to just five. Does this mean the Liberal slide has come to a halt, or is it just a blip?

The New Democrats have dropped 12 in the seat count, and their range has fallen from 53-81 to 43-77. This was due primarily to a drop in Quebec, where the party is down seven seats from the Feb. 3 update.

The bulk of the Liberals' gain, however, came in Ontario, where the gap between them and the Conservatives widened from 0.5 points to 2.9.

Let's look at the two polls that prompted the update. They were by EKOS Research for iPolitics and Forum Research for the Toronto Star. Both left the field on Feb. 10, but the EKOS poll had a longer tail. 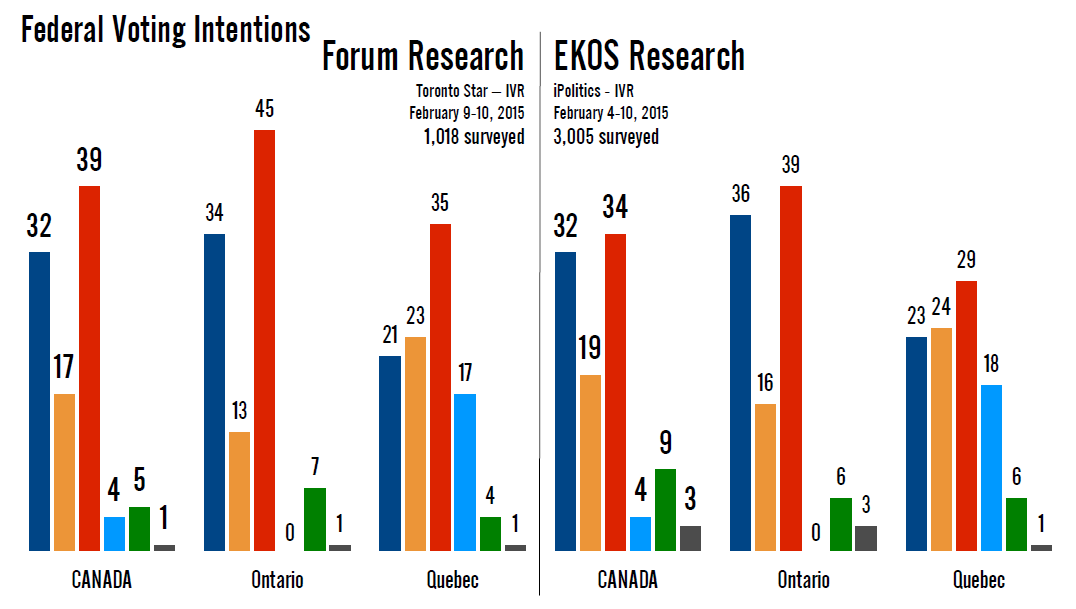 The increase in Liberal support is outside the margin of error, whereas the drop for the Conservatives and NDP is not. But before Liberals get too excited, consider their recent trend in Forum polling: 36% - 41% - 37% - 34% - 39%. On average, Forum has had the Liberals wobbling by about four points from one poll to the next. This would suggest to me that this bump in Liberal support is more house effect than anything real.

That is, at least in terms of its size. EKOS also recorded a modest rebound by the Liberals, which argues that perhaps the party is indeed recovering from their recent slide.

Only the Conservative drop was outside the margin of error, but both Forum and EKOS recorded similar trends for the Tories and Liberals. For EKOS, this poll halts a series of surveys showing Liberal/NDP decline and Conservative growth.

Can we reconcile the two polls? One wonders whether we should bother, considering Forum's history of volatility. But if we extend the polls' results to their respective margins of error, we get the following: 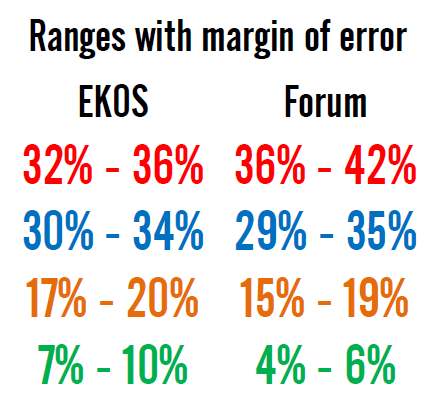 The two polls suggest that the shift in voting intentions may have occurred among men. Forum recorded a jump of six points for the Liberals among men, outside the margin of error, while EKOS also showed a statistically significant jump of 4.6 points for the party. Both showed the Conservatives sliding by four to six points. Together, it puts the Liberals at either 34% or 40% and the Conservatives between 34% and 35% among this demographic. There was no similarly consistent shift among female voters.

One anomaly of the Forum poll was in British Columbia, where the Liberals were up 15 points to 47%, the Conservatives were down 11 points to 24%, the NDP was up six to 23%, and the Greens were down nine to 5%. That is a lot of movement, particularly in the context of EKOS finding no party shifting by more than a handful of points. EKOS put the parties at 31%, 29%, 21%, and 16%, respectively.

In Quebec, the province everyone is keeping an eye on, both Forum and EKOS showed a bit of a reversal for the Conservatives. Forum had the party down to 21% and EKOS had them down to 23%, though both of those shifts were inside the margin of error. They are both still, however, relatively high numbers for the party in Quebec. The Liberals appeared to take advantage in both polls, Forum recording a significant jump of eight points (but EKOS just two).

The Liberals increase nationwide coincided with a drop in Justin Trudeau's disapproval rating, from 44% to 38%. His approval rating was up slightly to 48%.

Thomas Mulcair's numbers were fairly steady, at 51% approval to 36% disapproval. Regionally, his numbers improved west of Quebec and worsened east of Ontario.

It would be helpful to have a third (and fourth?) poll weigh-in on this, preferably one which uses a different mode of contact. Has the Liberal slide been reversed? Is the Conservatives' momentum coming to a halt? Or will this prove to be just a pause in the trends that have been building for the last few months? We'll see.
Posted by Éric at 10:14:00 AM