Polling completed in January, which included five national polls surveying over 10,000 Canadians, showed the Liberals leading in national voting intentions for the 22nd consecutive month. But with that lead at its narrowest, and polling at the tail end of the month turning sour, could this month have been the last in Justin Trudeau's winning streak? 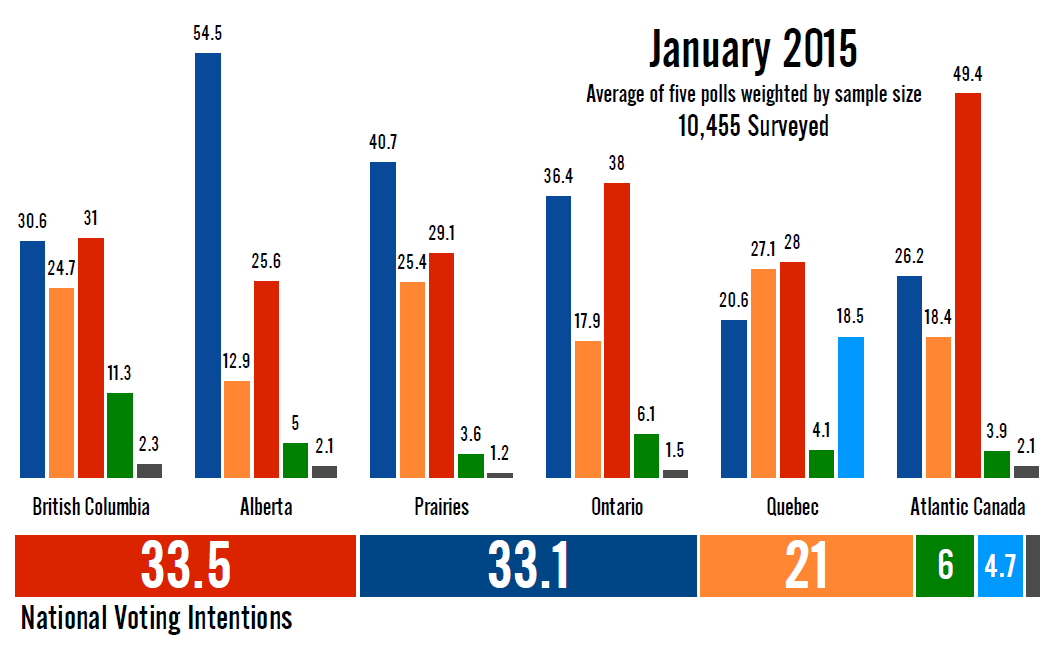 The Liberals led in January with an average of 33.5% support, a drop of 1.4 points since December and their lowest level of support since June 2014. The month also represented the sixth consecutive one of decrease or relative stagnation for the party, which was polling at 39% as recently as July.

(For the uninitiated, these monthly averages are different from the current projection at the top of the page, as all polls taken within a single month are treated equally, rather than decayed depending on how old they are. Polling track record is also not taken into account, only sample size.)

The Conservatives averaged 33.1% in January, an increase of 0.7 points and their best result in two years. It is also the closest they have come to the Liberals since Trudeau became leader.

The New Democrats were also up 0.7 points, to 21%. The Greens were down 0.2 points to 6% and the Bloc Québécois was up 0.4 points to 4.7%. An average of 1.7% of respondents said they would vote for another party or independent candidate.

The polls were generally in agreement in January. With the exception of the first poll of the year by Forum Research that put the Liberals at 37%, all polls pegged that party between 31% and 34%. The Conservatives registered between 31% and 35%, while the NDP was placed between 19% and 24%. 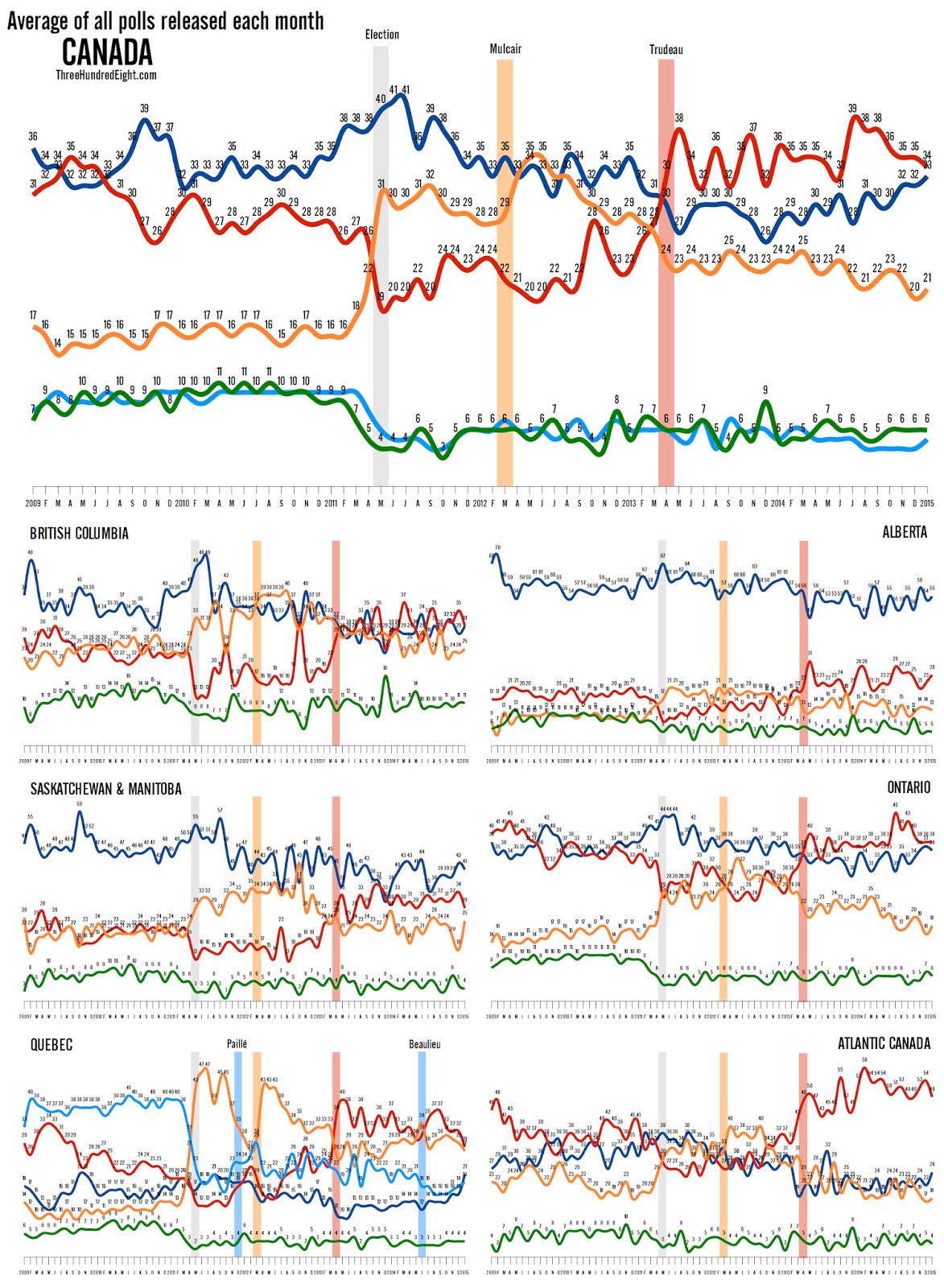 The Conservatives slipped two points to 40.7% in Saskatchewan and Manitoba, while the Liberals fell 4.7 points to 29.1%. That was their worst performance since May 2014. The New Democrats were up big, surging nine points to 25.4%. Could this be a reset for the party? It was polling at 24% to 26% between July and October 2014, before tumbling in November and December.

There was a lot of movement in Quebec last month. The Liberals put up their lowest numbers since March 2013 (pre-Trudeau), falling 4.3 points to 28%. The NDP had its lowest score since December 2013, falling for the third consecutive month to 27.1% (down 1.9). The Conservatives made a big gain of five points, hitting 20.6%. That is their best since August 2011, and the first time since then that Stephen Harper's party has placed ahead of the Bloc Québécois. Nevertheless, it wasn't a bad month for the Bloc, as the party was up 0.6 points to 18.5%, its best since May 2014 and its third consecutive month of gains. The Greens, meanwhile, were up 0.1 points to 4.1%.

In terms of seats, the Conservatives would win 137 on these support levels, a drop of two seats since December. The Liberals dropped six seats to 124, while Thomas Mulcair's NDP was up seven seats to 72. The Bloc and Greens would win three and two seats, respectively.

Regionally, the Conservatives were up seven seats in Quebec and two in Atlantic Canada, but dropped three in the Prairies and eight in Ontario.

The Liberals were up three seats in Ontario, but down one in British Columbia, two in the Prairies, three in Quebec, two in Atlantic Canada, and one in the North.

The NDP was down five seats in Quebec, but up one in British Columbia, five in the Prairies, five in Ontario, and one in the North.

We could be in the midst of some significant political shifts. The Liberals could lose the lead in national polls in February for the first time in almost two years, largely driven by an unexpected Conservative surge in Quebec. And that surge could also have implications for the NDP, who have the most to lose to the Tories in the province. Such an unusual turn of events (despite the narrowing of the gap nationally, the Liberals have actually improved their position in battleground Ontario) could change the dynamics of the electoral math. It will be interesting to see what, if any, effect this will have on the party's strategies.
Posted by Éric at 11:26:00 AM