You've heard the story by now. On Monday, Conservative MP Eve Adams, apparently denied her nomination papers by the Conservative Party, crossed the floor to the Liberals and has decided to try her hand at being a giant slayer, taking on Minister of Finance Joe Oliver in the Toronto-area riding of Eglinton-Lawrence. She'll have to win the Liberal nomination in the riding first, and that is far from a sure bet.

But if she does win the nomination, or even if she doesn't, can Joe Oliver secure re-election in Eglinton-Lawrence?

Based on current polling trends, and all else being equal, Eglinton-Lawrence is a riding that the Conservatives would have a very hard time keeping from the Liberals. Oliver won it in 2011 with 47% of the vote, defeating Joe Volpe, who had taken 38% of votes cast. 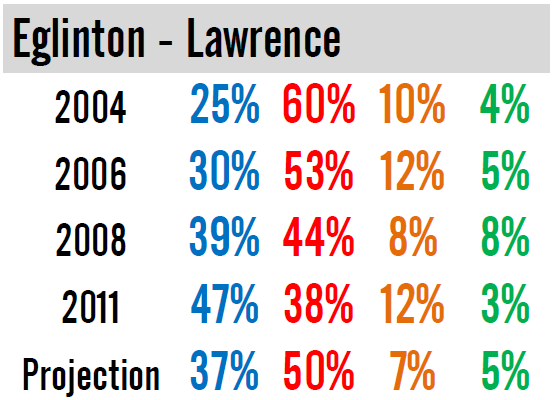 Volpe had held the riding since 1988, and the Liberals before that since its creation in 1979. Never before 2011 had the party captured less than 40% of the vote in the riding, and even the Liberals' last win in 2008 was the first time Volpe had failed to capture a majority of the vote.

At the provincial level, Eglinton-Lawrence has voted Liberal in every election since 1999 when the boundaries were changed to match the federal ones. In every election but 2007, Mike Colle took a majority of the vote. Last year, he took 55%.

With the Conservatives having dropped to about 37% in the province, and the Liberals having increased their support to 37% as well, Eglinton-Lawrence is a riding that the Liberals should be able to win. The current projection gives the Liberals 50% of the vote. Joe Oliver would come up short with 37%, and this includes his incumbency bonus. Of the 50 ridings currently projected to be won by the Liberals, there are 12 that are considered less likely wins for the party than Eglinton-Lawrence.

The incumbency bonus awarded to Oliver is worth 8% of his support. That is to say that what the unadjusted swing model would give him is boosted by a factor of 1.08. In order to be projected to win the riding, that factor would need to be increased to 1.46. Only one incumbent MP whose party had dropped in support managed to resist regional trends by such a factor in the 2011 election. He just happened to be Justin Trudeau.

The model estimates that for Joe Oliver to win, he would need about 44% support. The factor of 1.46 is required to get him there, but that assumes the Liberals are also boosted by current trends. The model then has to rejig the numbers to get everyone's projected results to add up to 100%, so the standard of 1.46 is not a fair one to apply to Oliver.

Instead, let's use the mark of 44% to be Oliver's baseline. With that number we are assuming that, with current polling trends, Oliver will lose the riding if he can't manage 44% of the vote. At 43% or less, the math suggests the Liberals are winning the riding.

Stripped of all adjustments, Joe Oliver would be projected to take 38.8% of the vote in Eglinton-Lawrence due to the Conservatives' drop in Ontario. To reach 44%, he would need to out-perform expectations by a factor of at least 1.14.

The odds are against that happening. In the work I have done to try and estimate how to adjust the projections in order to take incumbents into account, I have identified 797 incumbents seeking re-election in the 2006, 2008, and 2011 elections. Only 116 of them, or 14.6%, have managed to out-perform the proportional swing by a factor of 1.14 or more.

This means that, all else being equal, Oliver's odds of getting 44% of the vote or more, on current polling trends, are about 14%. That makes it a bad bet to wager on Oliver's re-election if we think of him as a generic incumbent.

Nevertheless, Oliver's odds are now just a little worse than 4 to 1. But just who were the 38 incumbents in 2011 who bucked the trends by 1.14 or more when their party was losing support?

Most of them were Liberals, of course, as the party dropped support throughout the country. The Bloc Québécois makes a few appearances as well. But you can see that a lot of the names tend to be some of the better known incumbents. At the top of the list is Justin Trudeau, who did better than any other incumbent.

Also high on the list are big names like Denis Lebel, Christian Paradis, Denis Coderre, Marc Garneau and Joyce Murray. Most of those at the top of the list survived the cull, and secured re-election.

This would suggest that Joe Oliver's true odds for re-election only start to get better at a factor of 1.20 or more, which means about 47% of the vote. That would be a tall order, considering that he secured 47% of the vote in the Conservatives' high-watermark election of 2011, against the Liberal Party's worst performance in its history.

Oliver, however, is a cabinet minister - and not just any cabinet minister. As Minister of Finance he is generally recognized as the No. 2 in the government. That should give him a serious boost. 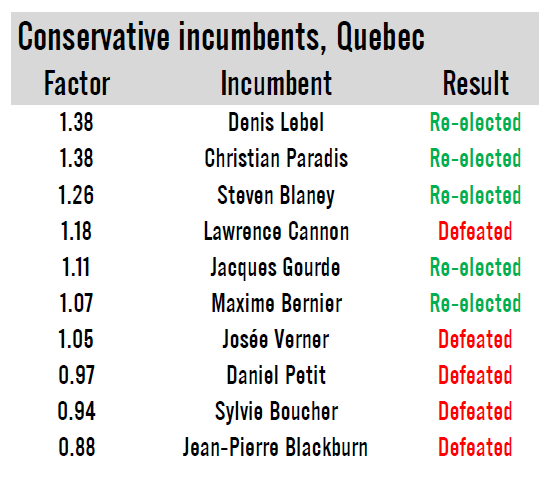 These numbers are relevant for Joe Oliver, because it sheds some light on the performance of Conservative cabinet ministers in the context of a sinking party.

Being in cabinet did not seem to help Blackburn, who had a horrible performance. Verner was also on the lower end. It did help Paradis and, to a lesser extent, Cannon.

I think Lawrence Cannon is a good example, as his portfolio was the closest in profile to Joe Oliver, and his riding of Pontiac was generally a very Liberal-friendly one (though not to the extent of Eglinton-Lawrence). Cannon out-performed the swing by a factor of 1.18, above Oliver's lowest benchmark but short of the 1.20 he would probably need to win again. That might be ominous.

Of the other Conservative MPs in Quebec, Denis Lebel was a Minister of State and Jacques Gourde, Daniel Petit, and Sylvie Boucher were parliamentary secretaries - the title Eve Adams held before she crossed the floor.

And that brings us, finally, to Adams. She is not a traditional floor-crosser, as she is seeking re-election in a different riding. The model, then, would not treat her differently from any other candidate.

But will local voters? It seems that Liberals in Eglinton-Lawrence are not too thrilled about her candidacy, so she may not get the nomination to begin with. And if she does, I am not convinced she will be an asset for the Liberals. If anything, I'd wager she would do less well than a generic Liberal candidate.

So there are a few things working in Oliver's favour. His is a name we'd more likely see at the top of the list of over-achieving incumbents, rather than under-achieving ones. As Minister of Finance, his profile is the highest he could have without being party leader. He may face a controversial Liberal candidate. And the local factors in the riding, for example the large Jewish population (Oliver is Jewish, the large Italian community was also important in Volpe's wins), may play in his favour. Those are all of the intangibles. But Eglinton-Lawrence is, at its core, a Liberal riding. On paper, the odds would be against his re-election.
Posted by Éric at 10:36:00 AM