But the Conservatives were not writing off Quebec entirely. Early last year, The Globe and Mail reported on Conservative plans to win a 'Blue Arrow' of seats in Quebec, some 15 in all. It seemed unlikely at the time, considering the party was at 13%.

I wrote about how the Conservatives' chances in Quebec are looking a lot better lately, and why, for the CBC. Check out the article.

Here, let's take a look at what this 'Blue Arrow' might look like, using the current seat projections. Note that this is about where the parties are now, not necessarily where they will be in October.

At the moment, the projection awards 16 seats to the Conservatives in Quebec, or a likely range of between 13 and 18 seats. The maximum range extends to between nine and 22 seats. Where are they? 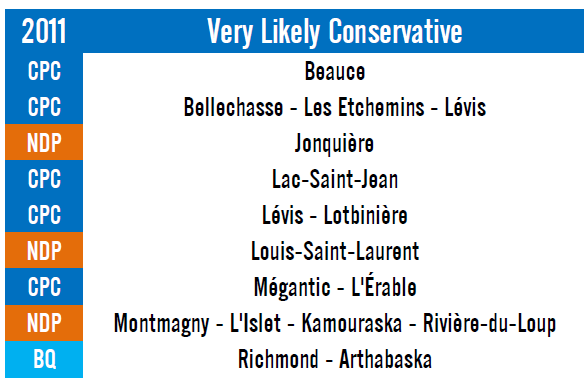 There are nine seats that are currently considered to be very likely Conservative wins. At neither the likely nor maximum ranges does another party overlap with the Tories in these nine ridings.

Three other seats were won by the New Democrats in 2011, but had been held by the Conservatives prior to that vote. These are Jonquière (now occupied by NDP-turned-Bloc Claude Patry, who will not be running again in 2015), Louis-Saint-Laurent (where NDP MP Alexandrine Latendresse will not be running for re-election), and Montmagny - L'Islet - Kamouraska - Rivière-du-Loup (where Bernard Généreux is seeking to re-take the seat).

The last on the list has no recent Conservative history. It is Richmond - Arthabaska, which had been held by André Bellavance of the Bloc from 2004. But the Conservatives did finish a strong third in 2011 with 25%, and the riding was formerly held by André Bachand of the Progressive Conservatives. With Bellavance not running again, Richmond - Arthabaska is an open seat. It also next door to Paradis's riding of Mégantic - L'Érable.

Here we can see the arrow the Conservatives are taking about. It starts in the Lac-Saint-Jean region and stretches down to Quebec City and over the St. Lawrence into Bernier's riding. From there, it stretches to the west towards Richmond - Arthabaska, and to the east to Montmagny.

There are four likely Conservative seats, as they only overlap with another party at the maximum ranges. These are all ridings currently held by the New Democrats.

The riding of Pontiac in the Outaouais (far from Blue Arrow territory) is also a likely Conservative pick-up. This was Lawrence Cannon's seat prior to 2011.

Finally, there is Chicoutimi - Le Fjord. This riding has not voted Conservative of any stripe since 1997, but here again the party was a strong third in 2011 with 26% of the vote.

Here, we're starting to see why the Conservative gain in the province could be a lot of trouble for the New Democrats. All of the Conservatives' losses in Quebec came at the hands of the NDP in 2011, and if trends continue positively for the Tories their gains will come at the expense of the NDP in 2015. At the same time, a Conservative increase is a problem for the Liberals, as it reduces their chances of winning new seats from the NDP as well. In this batch, that means Pontiac.

All three of these are in or around Quebec City, ground zero for any Conservative breakthrough in the province.

Two of these ridings are in Quebec City itself and were formerly held by the Conservatives: Beauport - Limoilou (Sylvie Boucher) and Louis-Hébert (Luc Harvey). In both ridings the Conservatives will be vying with the NDP for the seat, while the Liberals are also in play in Louis-Hébert.

Beauport - Côte-de-Beaupré - Île d'Orléans - Charlevoix, along with being ungodly long as a riding name, is a large riding stretching from just east of Quebec City to beyond the Saguenay River. It has not voted Conservative recently, but with the re-distribution the riding has become slightly more Conservative (the party took 23% of ballots cast in the new riding in 2011). Boucher will try her luck here, rather than in her old riding. Along with the NDP, the Bloc is in play here.

There are two ridings in which the Conservatives are not projected to win, but where their likely ranges overlap with the favoured party. Both of these are not in that Blue Arrow territory, suggesting that we're now heading well off the map.

The first is Abitibi - Baie-James - Nunavik - Eeyou, currently held by the NDP's Roméo Saganash. This riding, which spans all of northern Quebec, last voted for the Tories in 1988. But the party finished second here in 2011, with 23% of the vote. That was 22 points behind the NDP, but with the party dropping in the polls it puts the riding potentially in play for the Conservatives. Intuitively unlikely, perhaps.

The other riding is a complete toss-up: Saint-Maurice - Champlain in the Mauricie, where Lise St-Denis (the NDP-turned-Liberal) will not run again. The Conservatives finished third here with 17%, behind the NDP (41%) and Bloc (29%). But because of the shift in voting intentions since then, the riding could go any which way.

Saint-Maurice - Champlain is a good example of how confused the political landscape could become in Quebec. The current projection gives it to the NDP with 25%, with the Bloc, Liberals, and Conservatives all at 23%. This is what happens when you have no party with over 30% support province wide, and demonstrates nicely how the first-past-the-post system can get very strange when pushed to its extremes. I don't know if Saint-Maurice - Champlain will actually divide up so cleanly between the four parties, but I am certain that unless things change we will see a number of MPs elected in Quebec with less than 30% of the vote.

Finally, we get to the marginal Conservative seats, all but one of them well outside the Blue Arrow. These are ridings in which the Conservatives overlap with the projected winner at the extrme ranges.

Two of them are in western Quebec: Argenteuil - La-Petite-Nation, which occupies much of the border between Ontario and Quebec east of Gatineau. The riding has no particular Conservative history, but the party did finish second there in 2011 with 23%. The Tories will have to fight off the Liberals and NDP to win it.

The other riding in the west is Vaudreuil - Soulanges, which would be an interesting pick-up for the Conservatives. You may recall that this is the riding Michael Fortier tried to win a few elections back. In 2011, the party took 18% of the vote. They would have to make up a lot of ground, but it could be one of their better chances at a Greater Montreal area riding. The Liberals and NDP are the parties more likely in play here, though.

The last part of the Quebec City puzzle is the riding of Québec, which forms the downtown core of the city. It resisted the Conservative blue wave in the provincial capital in 2006 and 2008, before being wrestled away from the Bloc by the NDP in 2011. The Conservatives took 18% of the vote at the time.

Finally, there is the eastern Quebec riding of Gaspésie - Les Îles-de-la-Madeleine. The party took 19% of the vote here in 2011, but it was one of the marginal NDP pick-ups. Philip Toone won it with just 34% of the vote on the original boundaries. On the new ones, he would finish second with just 29%.

This is well outside of Quebec's conservative heartland, but the federal Tories did take 32% of the vote here in 2006. A more likely winner, though, is the Liberal Party, which has more of a history in the Gaspésie (particularly at the provincial level) or the Bloc, which benefited greatly from the redrawing of the boundaries. But if Conservative fortunes continue to improve, this riding and the ones above would start to move over into the party's column.

A Conservative breakthrough in Quebec turns everything on its head. If the party can capture 10 more seats in Quebec, losses in Atlantic Canada are suddenly much more palatable. And Quebec is the province where the Liberals desperately need to win seats to counter the Conservative advantage in the West. It is also the province the NDP needs to win to have a chance at holding on to its Official Opposition role, let alone to form government.

But as you can see above, 16 of the 17 seats the Conservatives could potentially gain on current support levels come from the NDP. They stand to lose the most by the Conservative increase - at least in terms of the current map. The Liberals lose a lot of opportunity, as they are in play in six of those 17 potential gains. They would be in play in a lot more of them if the Conservatives hadn't gained at their expense.

And the fact that the Conservatives are now first in the national polling averages owes a lot to Quebec. The party has gained about eight points in the province since early November, equally at the expense of the Liberals and NDP. Without those gains, then, the Conservatives would instead be at around 32% nationwide, with the Liberals holding a two-point lead (and the NDP at 21%). Of all the scenarios that might have been envisioned to cause the Liberals to lose the national lead in the polls, I don't think many of us had wagered on a Conservative breakthrough in Quebec. The province continues to surprise us.
Posted by Éric at 9:51:00 AM