With little over six months to go before the official start of the 2015 federal election campaign, the latest polls from EKOS Research and Abacus Data show the Conservatives and Liberals in a very close race.

The current projection reflects this. The previous update, done on Feb. 17 and incorporating polls in the field to Feb. 10, had the Liberals narrowly ahead with 34.2% support to 32.9% for the Conservatives. Now, that gap of 1.3 points has reduced further to just 0.5 points, with the Liberals at 33.5% and the Tories at 33%.

I go over the latest projection numbers and the regional breakdown in my CBC article this week. Please check it out.

Let's look at the two national polls added to the projection (CROP was also added for the Quebec numbers), by EKOS Research for iPolitics and Abacus Data. 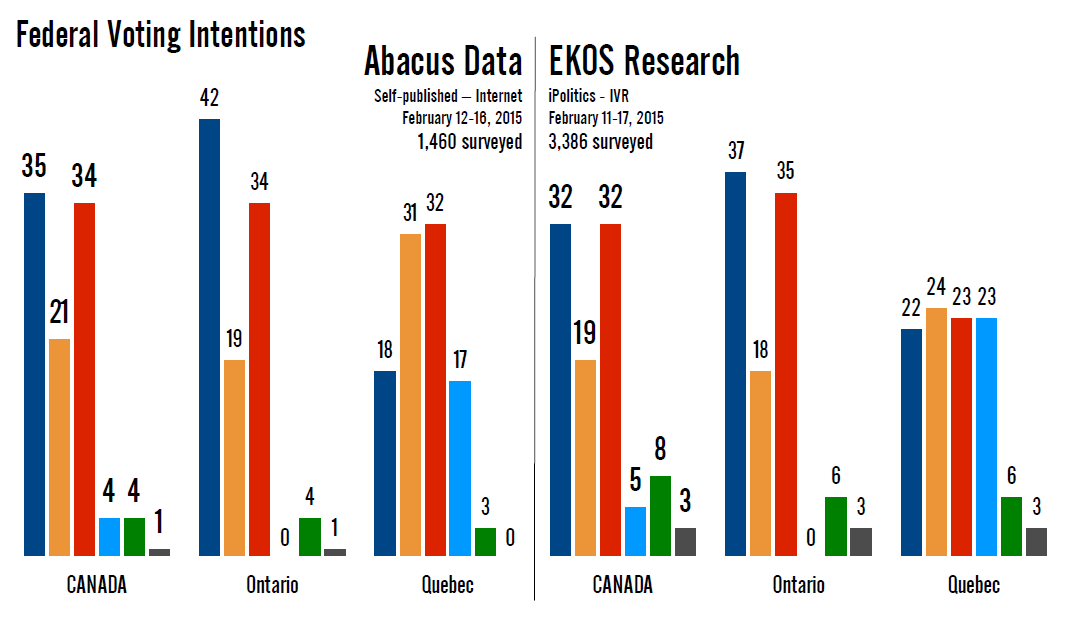 Abacus was last in the field Jan. 26-28. Compared to that poll, both the Conservatives and the Liberals picked up two points to reach 35% and 34%, respectively. The NDP was down three points to 21%.

None of these shifts were outside the margin of error of similarly sized probabilistic samples. Indeed, Abacus's numbers have been wobbling back and forth for some time, with no discernible trend.

Regionally, there were few major differences in the two polls in most parts of the country. The Liberals narrowly ahead in B.C., where the NDP is faltering, the Conservatives well in front in Alberta, the Liberals with majority support in Atlantic Canada, and the Conservatives ahead in Ontario (considering the sample sizes, the differences between the Abacus and EKOS polls there are really marginal).

The other point of disagreement is Quebec, which has become par for the course in recent polls. It does seem to be a methodological difference, since the online polls are all in agreement and the IVR polls are generally on the same page.

That represents some exceptional results. For the Liberals, it would be their worst result in any poll since March 2013, or 124 polls ago. For the Bloc, only two of the last 53 polls have been better.

It is possible that EKOS is on to something, but it looks more likely that this is a bit of an outlier result, which is bound to happen from time to time.

The most recent polls from the province have some points of agreement, but also paint a very confusing portrait of what is going on in Quebec. Here are the latest results (all polls taken between Feb. 9 and 17) with their respective error ranges (assuming probabilistic samples in the case of Abacus and CROP).

For the Liberals and Conservatives, the four polls do not all overlap. Or at least, the three by Abacus, CROP, and Forum do, whereas the EKOS poll does not.

With these numbers, we can posit that EKOS was probably a little low for the Liberals and high for the Bloc, and that the Liberals' true support probably lies closer to the high-20s or low-30s in the province. The New Democrats seem to be in the high-20s.

The province is certainly in flux, and undoubtedly the smaller amount of interest in the federal scene has an influence on how fluid voters are in the province. But with the race becoming a four-way contest, an extremely wide range of outcomes is possible.

Consider how Quebec alone could cause a huge swing. If we use these seat ranges and apply them to the current projection, assuming all the other provinces go as projected, the Conservatives would be at 137-149, the Liberals between 118-153, and the NDP between 33-81. The stakes in Quebec are laid out quite clearly here: probably not too significant for the Tories, but the province decides whether the Liberals win or place second, and whether the NDP stays as a strong party or returns to pre-2011 days.

The polls did a good job calling the federal election in Quebec in 2011, better than anywhere else in the country. It might not prove so simple in 2015.
Posted by Éric at 10:51:00 AM