The polls have spoken. The Ipsos Reid survey published Wednesday afternoon by Global News put the gap between the Liberals and Conservatives at just one point, exactly the same margin as recorded by Abacus Data and EKOS Research. Even the support levels are very uniform: 32% to 35% for the Tories and 32% to 34% for the Liberals. For all intents and purposes, the national landscape is now a tie. 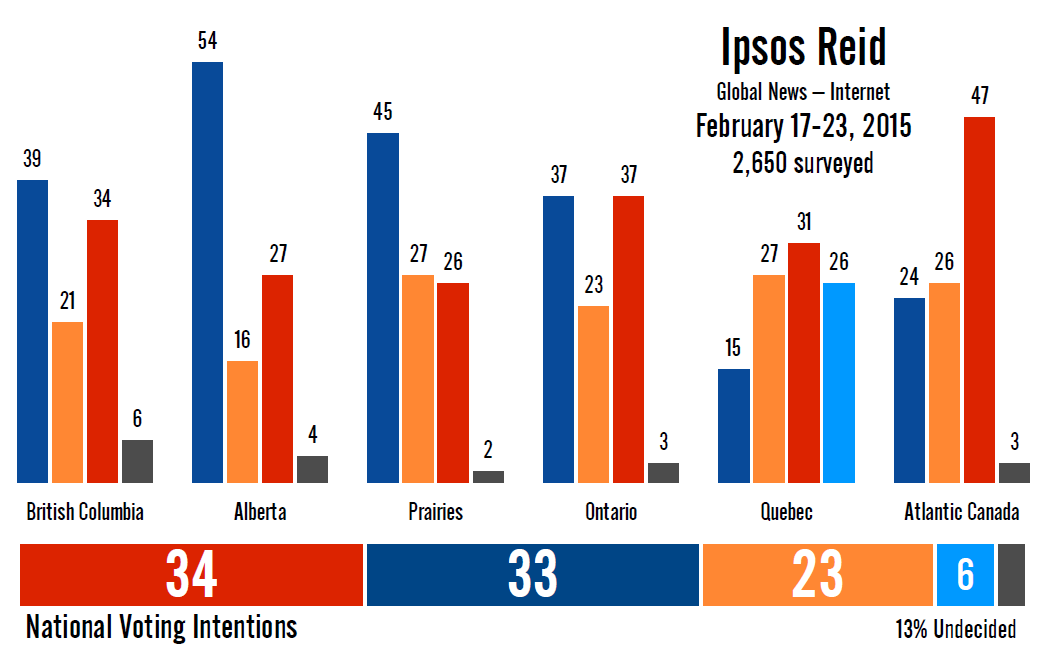 Ipsos was last in the field between Jan. 6 and 11. Since that poll, the Liberals picked up three points to move into the lead with 34%, while the Conservatives were down two points to 32%.

The New Democrats slipped one point to 23%, the Bloc Québécois was steady at 6%, and support for other parties (including the Greens, which Ipsos does not prompt for) was down one point to 3%.

None of these shifts were outside the margin of error of similarly sized probabilistic samples.

Ipsos's last poll was hinting at a Conservative surge. No other survey at the time was suggesting quite the same thing, so it appears that it was just the product of normal sampling error and this new poll is a reversion to the mean. Apart from the sharp decline in Liberal fortunes since the fall, there is no discernible trend in Ipsos's numbers over the last few months.

Oddly, Ipsos showed a big uptick in support among the youngest Canadians for the Conservatives, putting them up seven points to 29%, just five points behind the Liberals and one point ahead of the NDP (which was down eight points). This might seem like a counter-intuitive result, but in fact the recent Abacus and EKOS polls have also shown improving numbers for the Tories among young voters. Why this might be, however, is beyond me, as is whether this is a real trend or an anomalous blip.

The regional results are fairly typical, with some small variations.

The Conservatives led in British Columbia with 39%, putting them ahead of the Liberals, who were at 34%. The six most recent polls had put the Liberals ahead, so this is a bit of a reversal. But that other polls were in such agreement in B.C. was, itself, unusual. Ipsos has recorded a drop in NDP support in the province, to 21%, as others have.

The Conservatives led in Alberta and the Prairies with 54% and 45%, respectively, but Ipsos puts the NDP in much better form in the Prairies than other polls at 27%, one point up on the Liberals.

The Liberals and Conservatives were in a tie in Ontario at 37%, which is almost identical to the current polling aggregate. The NDP at 23%, however, is a much better result than the party has seen in most polls in some time.

And Atlantic Canada is the usual, with the Liberals way ahead of the NDP and Tories with 47% to 26% and 24%, respectively.

But what about Quebec? It has been the wildcard in federal polling lately, and this survey is no exception.

As most other polls have it, the Liberals were ahead with 31% to 27% for the NDP. This represented a sizable, but just inside the margin of error, increase for the Liberals. The Bloc Québécois was in third with 26%, while the Conservatives were well behind at 15%.

We've discussed the standing of the Conservatives in Quebec quite a bit, and this Ipsos poll would seem to argue in favour of their gains having been wildly over-stated. I think there is something to that. But if we look at the trends from each of the pollsters that have been active so far in 2015, there is a pattern that emerges. Virtually all of them have had the Conservatives gaining in January and early February, compared to where they were in December. But now the polls seem to be showing those gains tailing back or plateauing. Ipsos is well in line with that, with a three point drop.

The debate, then, is more about the size of the gain and the amount of support the Conservatives really have. The trends seem clear enough, however.

Another notable result here is the 26% for the Bloc Québécois. Coupled with the EKOS poll that put the party in second place with 23% last week, some were saying that the new Quebec narrative should be about the Bloc's rebound. I think that is premature.

This Bloc result is the best the party has had in any poll in a year. But that it comes from Ipsos is significant. The Bloc is only up one point from Ipsos's early January poll, so the number is far from unusual.

So, it would appear in this case that we should not get ahead of ourselves in predicting a comeback for the Bloc. As far as Ipsos is concerned, the party is in a better position now than it was in the summer and fall, but is otherwise holding steady. This is the consensus among most other polls as well. Quebec is a confusing place for federal polls, so let's focus on points of agreement when they exist.
Posted by Éric at 10:35:00 AM