Post-debate polls suggest Wildrose slipping, but what about the NDP?

As debates go, the Alberta leaders debate last night seemed potentially consequential. Most debates tend to be dull affairs where each party leader lives up to their lowest expectations. But last night did not feel like that. What do the polls say?

One poll done just after the debate concluded, by Mainstreet Technologies, showed a big win for the NDP's Rachel Notley, with the Tories' Jim Prentice in second. That fit with the consensus view. But a voting intentions poll done by Mainstreet released this afternoon suggests that the NDP has not had a boost, though Wildrose has taken a hit.

A poll by Forum Research, done on April 22 and 23 (so before and after the debate), showed a similar slip for Wildrose. But the Tories dropped as well, and the NDP surged into first place. Is it an outlier, or a sign of things to come?

The projection, as always, takes the middle road. The NDP is now first in the vote projection with 35%, enough to give the party 26 to 45 seats. That flirts with a majority, but is mostly in minority territory.

Or Official Opposition territory, as with 32% Wildrose can win between 25 and 42 seats. That is down from the 35% the party had in the last update.

The position of the PCs has improved slightly, with 25% and five to 31 seats. That no longer puts them only in third place. They could still potentially finish in second, at least in regards to the likely averages.

At 5% and one to three seats, the Liberals can hope for the balance of power but nothing more. 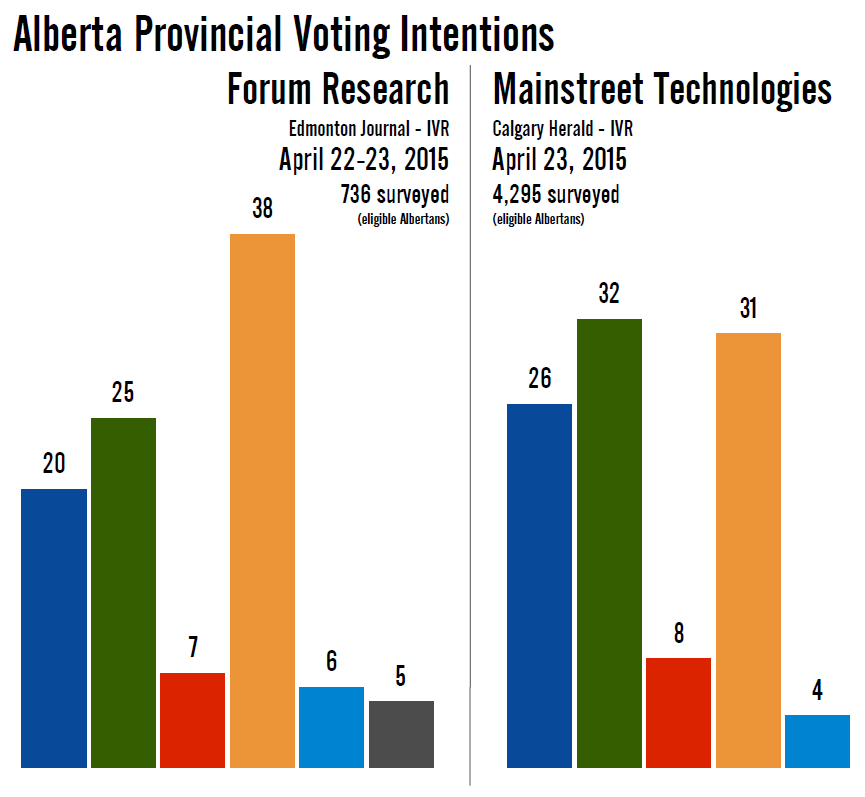 Mainstreet's poll in the Calgary Herald showed Wildrose down three points since the poll of April 20, but still narrowly ahead with 32%. The NDP was unchanged at 31%, while the Tories were up one point to 26%.

These are opposing trends, though the margin of error in the Forum poll (+/- 3%, with Mainstreet's at +/- 1.5%) could explain much of the divergence.

The two agree on Wildrose being down, which is a believable result considering Brian Jean's middling performance last night. But they disagree on the trends for the NDP and the PCs. Mainstreet has the Tories still very much in the race. Forum has the NDP at almost double the PCs' support.

Part of that may be one of the oddities of the Forum poll. In total, Mainstreet gave the Liberals and Alberta Party 12% support. Adding the 'others' to that number, we get to 18% for Forum. Considering the slate of candidates these three categories include, that is just not plausible. The Liberal score may only be slightly inflated, but for the Alberta Party to have 4% to 6% support, they would need to average about 10% to 14% in each of the 36 ridings where they are running candidates. That just isn't very likely.

And what of the 5% Forum awarded to other parties? That will have to go somewhere, and is nowhere to be seen in Mainstreet's estimations (which do not include the option).

These polls are in some serious disagreement, but that discord might not be as dramatic as it seems considering the margin of error. The broader trends are still relevant - the New Democrats doing historically well, Wildrose polling just under its 2012 support but high enough to win a large number of seats, and the PCs in third. We will need some more polling, and particularly some polls done once the debate can sink in a little more (and perhaps fade from memory) to get a better idea of the precise state of the race.

But we shouldn't be too shocked at these results. The electorate is extremely volatile in Alberta, and for the last two weeks we have only heard from Mainstreet. Sooner or later, another voice was going to get involved and muddle things.
Posted by Éric at 7:13:00 PM