A new Léger Marketing poll released over the weekend gives us an indication of how the federal campaign has influenced provincial politics in Quebec. In short, the Parti Québécois appears to have suffered slightly in conjunction with the disastrous federal results for the Bloc Québécois, but neither support for sovereignty nor Quebec's left-wing party, Québec Solidaire, has shifted. 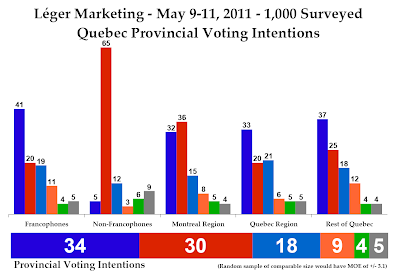 Compared to Léger's last provincial poll taken during the campaign between April 11-14, the Parti Québécois has dropped four points to 34%. That is below the level of support they had in 2008, but the 5% opting for the "Other" option are likely skewing the results.

Between now and the election, probably in 2012, it is unclear whether François Legault will form a new party. He has already more or less refused to join with the ADQ. And if he does form a new party, he is likely to get more than the 5% that the Others are getting in this poll. So it is difficult to know what can be done with this particular result.

Nevertheless, the PQ's 34% is still well above the 23% the Bloc received on May 2nd. And the Liberals, the main federalist party, have not benefitted from the campaign. They've dropped one point to 30%.

Instead, the ADQ (a party quite different from the NDP, to say the least) has made gains, going from 14% to 18%, while Québec Solidaire is unchanged at 9%. Considering that QS should be the natural beneficiary of the NDP's rise in the province, it is quite surprising to see that QS has not moved an inch.

Similarly, support for sovereignty is virtually unchanged. It now stands at 41%, down a statistically insignificant two points since the April poll. That is virtually the same result as the 1980 referendum and where support stood just before the referendum campaign of 1995. As some other polls on why Quebecers voted they way they did have shown, it wasn't because they were turning away from the idea of sovereignty. Despite the downfall of the Bloc, the option is not quite dead yet.

Regionally, there haven't been significant changes. It is interesting, however, that the ADQ has seen its support grow in Montreal and the rest of Quebec while dropping in Quebec City.

But the key shift in this poll is in who Quebecers think would make the best Premier. After removing the undecideds/non-response, Jean Charest tops the list with 36% support, a gain of eight points since mid-April. He is now more popular than his party - incredibly. Many people have thought that Charest's nine lives had run out, but it appears they haven't. Pauline Marois stands at 34%, a drop of eight points, while Amir Khadir and Gérard Deltell are each at 15%. But for Khadir that makes him more popular than his party, while Deltell is less. 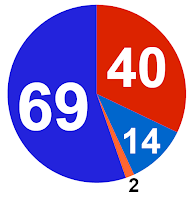 With the results of this poll, ThreeHundredEight projects the Parti Québécois would form a majority government with 69 seats. The Liberals win 40, the ADQ 14, and Québec Solidaire two.

This is a slightly better situation for the would-be opposition parties than was the case before the federal election, when the Parti Québécois was in the 75-85 seat range.

There has been much talk about Quebecers' want of change, but at least in this poll it appears that this want did not translate to the provincial level. While this is a low level of support for the Parti Québécois, it is generally where we have seen them since the 2008 election. We will need to see some more polls for confirmation that they are on track to lose support since that last election.

But the question of leadership was a major factor in Quebec in the federal campaign. Still, despite besting Marois by a few points, Charest is unpopular. Jack Layton, on the other hand, is liked by Quebecers. That can motivate people to go out and vote, whereas choosing the least bad option in a public opinion poll may not be an indication that Charest-fever is sweeping the province. Just a hunch.
Posted by Éric at 10:10:00 AM