I was not going to post today. I was instead going to update the chart showing the monthly federal polling averages without any fanfare or mention. March and April needed to be added, and the election results of May 2nd were to take the May slot. I will continue to keep track of federal poll results in this manner, but after inputting the information the image was simply too remarkable to put up on the site without comment.

Below is the average of all federal polls released during each month, stretching back to January 2009. Every poll released is given an equal weighting, so this is a simple average. For May, I've used the election results. And just look at the spikes. 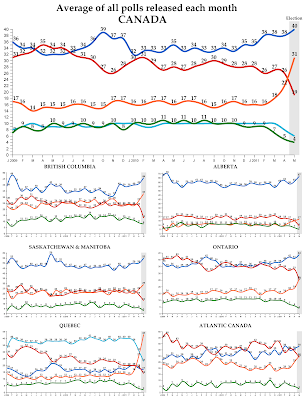 You can click on the image for a magnified view, and it will be stored in the right-hand column and updated with every passing month.

At the national level, things were pretty stable stretching back to January 2010. The Conservatives widened their lead over the Liberals in February and March of this year, and ended up on election night higher than any monthly average of polls has had them. The Liberals sank quickly to 19%, while the New Democrats spiked even more quickly. They had been stagnant at between 15% and 17% for more than two years, but in a period of a few weeks the party went from 18% or so to 31% on election night. Indeed, the April average is really only the half-way point between being in the high-teens at the beginning of the month and the high-20s at the end of it. You can clearly see the Bloc Québécois and Greens falling away as well.

In British Columbia, Alberta and the Prairies, it was much the same story. The Conservatives hit a high on election night, as did the NDP, at the expense of the Liberals.

In Ontario, the 44% of the Conservatives was the culmination of almost a year's worth of growth. Back in the summer of 2010, the Conservatives were around 35% and 36%. The Liberals had been holding pretty steady in the province for more than a year, but on election night their vote collapsed and the New Democrats rose to a historic high. Here again, we see the Greens trailing off.

But it is in Quebec that the NDP gain is most striking. There, the Bloc Québécois had been rolling along nicely between 36% and 41% since February 2009. Out of nowhere, the party drops to 31% in April and bottoms out at 23%, while the New Democrats sky-rocket from an average of 13% in February to 43% on election night. It is simply remarkable - the NDP blew by the Liberals and Conservatives and kept going well past the Bloc.

The Quebec chart also shows the problems of the Liberals here. They were in the low-30s back in early 2009, but had dropped to the low 20s a year later. That decline continued until they ended up at 14% on election night. The Conservatives held firm in the province, though they were still below their 2008 performance and their high of 21% between October and November of 2009.

The shift in Atlantic Canada is not as striking, as the election result generally echoed something we had seen before in December 2009. Still, the Conservatives and New Democrats hit a high while the Liberals hit a low.

How things changed in Canadian politics, almost overnight, is starkly laid out in this chart. The next election is over four years away, but I have to admit I am very curious to see how this chart will look even a year from now. Hopefully the polling firms will report now and then, despite this majority climate.
Posted by Éric at 10:15:00 AM