ELECTION NIGHT UPDATE: Well, that did not go well. I'll do a post-mortem tomorrow and investigate whether it was the seat model or the popular vote model (or both) that was wrong. The seat model will definitely be closer to the real result when the correct regional/provincial vote numbers are put into it, but how much closer will have to wait until tomorrow.

The polls were released later than expected, and so the final projection update is also coming later than expected. Many polls were added to the projection today: 10 in all. They include polls from Nanos Research, Léger Marketing, Forum Research, Abacus Data, COMPAS, EKOS Research, CROP, and Harris-Decima. And several of these firms had multiple polls added to the model as they released new data throughout the day.

In the end, this amount of polls has represented several normal days' worth of movement in the projection. The change has been radical.

On the eve of the vote, ThreeHundredEight.com projects that the Conservative Party will win another minority government, with the New Democrats forming the Official Opposition. The Liberals will place third while the Bloc Québécois will be relegated to the fourth position in the House of Commons. 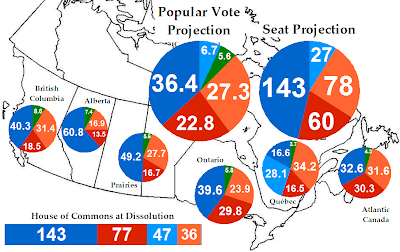 The Conservatives are projected to take 36.4% of the vote and 143 seats, the same number of seats they had when the government fell. However, considering that two of the three vacancies were safe Conservative seats, we can even say that this is a loss of two for the party.

The New Democrats are projected to take 27.3% of the vote and win 78 seats, an increase of 42 over their pre-election standing. It is almost double their previous best under Ed Broadbent.

The Liberals are projected to win only 22.8% of the vote and elect 60 MPs, a reduction of 17 since the election was called.

The Bloc Québécois is projected to win 28.1% of the vote in Quebec and 6.7% nationally, enough to give them 27 seats in the province. That is a loss of 20 for Gilles Duceppe, and the first time the Bloc would be reduced to a minority of seats in Quebec.

Compared to yesterday's projection, this is a drop of one seat and 0.4% for the Conservatives and a drop of 1.3% and five seats for the Liberals. The New Democrats are up an astounding 19 seats, as well as 2.2%. Most of this comes in Quebec, where the Bloc drops 1.7 points and 13 seats.

Twenty-two seats have changed hands in the projection since yesterday.

In British Columbia, the NDP takes Esquimalt - Juan de Fuca from the Conservatives, who had taken the seat from the Liberals in the projection recently. The New Democrats also take Saskatoon - Rosetown - Biggar from the Tories.

In Ontario, the Conservatives take Ajax - Pickering, Brampton West, and Guelph from the Liberals. The New Democrats take Beaches - East York and Parkdale - High Park from the Liberals and Oshawa from the Tories.

In Quebec, the New Democrats take Charlesbourg - Haute-Saint-Charles from the Conservatives. They also take the following seats from the Bloc:

This has been a very exciting ending to a very surprising campaign. I am confident in my projection, but I am well prepared for it to be wrong. This campaign has proven that anything can happen, and that Canadian politics do not always have to be boring.

Tomorrow night will be a very exciting one, no matter what the outcome. I will be watching simply as a Canadian, but will be on Twitter to comment on how the night unfolds and how the projection holds up.

And now that I've provided my take on what will happen tomorrow night, it is up to all of you to go out there and prove me wrong. That means you need to vote! 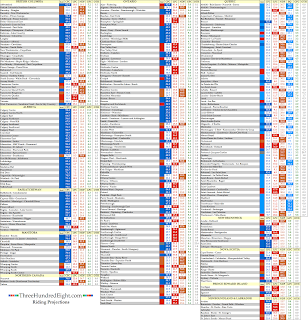