The last poll from CROP, conducted between May 11 and 16, shows that both the Parti Québécois and the Liberals have lost support since April. But despite being at 34%, the PQ is still in a position to win a large majority of the seats in the National Assembly. 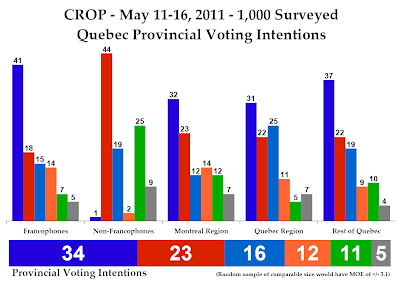 Compared to CROP's last poll taken between April 13 and 20, in the midst of the federal campaign, the Parti Québécois has lost six points but still holds an 11-point lead over the Liberals, with 34% to 23%. That represents a three point loss for the PLQ.

The Action Démocratique du Québec is up three points to 16%, a gain we also saw in Léger's last missive, while Québec Solidaire is up one point to 12%.

This is the second poll showing that the NDP's gains in Quebec have not transferred over to QS.

The Greens are up six points to 11% in this poll, a likely fluke considering that they are now at 25% among non-francophones. Only 69 non-francophones were polled, so the margin of error on this result is rather large.

Both this poll and the recent Léger poll have shown both the PQ and Liberals looking weak. However, neither of these polls have shown that any of the second or third tier parties are taking advantage to any great extent.

Among francophones, who make up the bulk of the population, the PQ is leading with 41%, followed by the Liberals at 18% and the ADQ at 15%.

In and around Montreal, the PQ is ahead of the Liberals with 32% to 23%. Québec Solidaire is running third, with 14%, while in Quebec City the PQ is also ahead with 31%. The ADQ is second with 25% and the Liberals third with 22%. 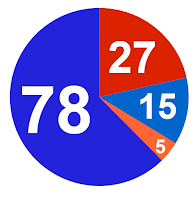 With the results of this poll only, ThreeHundredEight projects 78 seats for the Parti Québécois, 27 for the Liberals, 15 for the ADQ, and five for Québec Solidaire.

In the past, I would have looked at five seats for QS with skepticism, but the federal campaign in Quebec has shown that elections results are not pre-ordained.

This would be a very large majority for the PQ. Though sovereignty is not a top issue in Quebec at the moment, the option still has the support of 43% of decided voters according to this poll. With the support of Québec Solidaire, also a sovereigntist party, it is quite possible that with this PQ electoral victory a referendum would be on the horizon.

But Quebecers are still unenthusiastic about the prospect of Pauline Marois being premier. She received only 20% support on who is best suited for the job, though that is increased to 38% when we remove the "unsures" and "none of the aboves". Jean Charest follows with 16% or 30% of decideds, while Gérard Deltell comes in third with 10% (19%).

CROP still lists Guy Rainville as the leader of the Greens, despite Claude Sabourin being made leader in November.

Quebec is certainly making the headlines lately, be it because of the NDP's position on the Clarity Act or the province's opposition to the Conservatives' planned reform of the Senate. But we may be as much as two years from the next election, so there is plenty of time for Charest to turn the tide or for Marois to either run away with or scuttle her lead
Posted by Éric at 9:33:00 AM