2011 Federal Projection vs. the Results

Well, at least I got the order of the parties right.

Clearly, the final projection was wrong. It under-estimated both the Conservatives and the New Democrats and over-estimated the Liberals and the Bloc Québécois. While I was not alone in making this error, I humbly recognize that of all the projections mine was among the worst.

Of the 308 ridings in the country, ThreeHundredEight.com correctly called 234 of them. That's an accuracy rate of 76.0%, which is absolutely unacceptable.

In fact, inputting the actual provincial-level vote results into the model, treating them as the results of a poll, churns out a very accurate result. 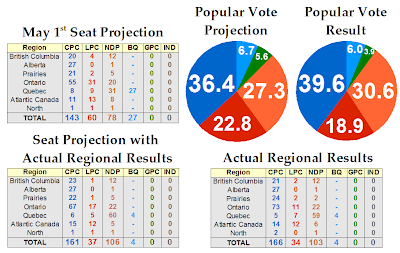 With the actual popular vote results in the 10 provinces, the projection model projects 161 seats for the Conservatives, 106 for the New Democrats, 37 for the Liberals, and four for the Bloc Québécois.

In other words, the model would have been off by five seats for the Tories, three for the New Democrats, three for the Liberals, and one for the Greens. It would have had the shocking four-seat result for the Bloc correct. In total, it would have correctly called 270 ridings for an accuracy rating of 87.7%. That could be better, but considering the wild changes in support throughout the country that is not a bad result at all.

Accurately capturing how people will behave at the polls, however, is a different matter. The vote projection model failed irrevocably. It was partly the fault of its slow progression and partly because of the inaccuracies of the polls.

ThreeHundredEight.com projected two things: the popular vote and how that would transform into seats. It failed at the first, which means it failed at the second. Work will be done to get the popular vote projection model up to snuff in time for the autumn provincial elections. However, I am very confident that my seat projection model is an accurate model, and will accurately project elections as long as the right numbers are put into it. Had I simply trusted the latest polls, rather than including weighted polls stretching back to the beginning of the campaign, my projection would have been much closer to the actual result.

I do apologize for the inaccuracy of my projections. But in the aftermath of such a historic election result the projection model has proven that it can be used effectively. I will work on ensuring that in the next election I will use it properly.
Posted by Éric at 10:01:00 AM