A new poll by Nanos Research reported Tuesday by The Globe and Mail shows that the Progressive Conservatives still hold a significant lead over Dalton McGuinty's Liberals, though that lead has narrowed. 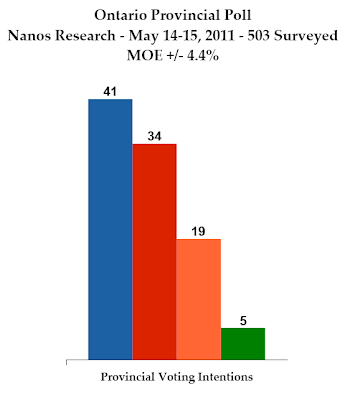 Compared to Nanos's last poll in March, the Progressive Conservatives are down three points but still lead with 41% support. The Liberals are down one point to 34%. This means the lead has gone from nine to seven points. The New Democrats are up three points to 19%, while the Greens are up one to 5%.

With the small sample size of 503 Ontarians, none of these changes in support are statistically significant. And considering that the New Democrats had 17% support in the 2007 election, it would appear that the federal campaign has had little impact on the provincial NDP's fortunes in Ontario. 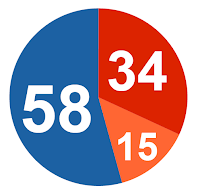 With this poll, ThreeHundredEight projects the Progressive Conservatives win 58 seats and form a majority government. That is a gain of 33 seats over their current standing in the Legislative Assembly, but a drop of four seats since the last projection.

The Liberals win 34 seats, a loss of 38 overall but unchanged from the March projection.

The New Democrats pick-up four seats since March and five over their current crop of MPPs, and would win 15 seats.

Nanos looked into the leadership question, and found some contradictory results. In terms of who would make the best premier, Tim Hudak of the Progressive Conservatives topped the list with 31%, up four points since March.

Current Liberal Premier Dalton McGuinty had 25%, up three points, while Andrea Horwath of the NDP jumped six points to 16%. That is a marginally significant real increase for the NDP leader.

But when we remove the "none of them" or "unsures" (that latter group dropped by 11 points), we get Hudak at 42%, McGuinty at 34%, and Horwath at 22%. That is generally where the parties stand, so these leadership numbers would appear to be relatively unimportant.

During the federal campaign, Nanos had the "Leadership Index Score", combining their results on questions of trust, competence, and vision for Canada. Applying that to Ontario gives McGuinty the leg up with a combined score of 85, compared to 71 for Hudak and 37 for Horwath. McGuinty and Hudak were generally at the same level on trust and vision, but McGuinty is considered far more competent.

It would appear that though more Ontarians consider McGuinty to be good at his job, people just don't like him very much. These numbers seem to fit in with the general perception of the Premier that can be sensed in Ontario.

Though a lead is a lead, it isn't the kind of lead a relatively unknown Hudak can take to the bank. Consider that a May 2007 poll by Environics, taken five months before the vote in that year's election, had John Tory's Progressive Conservatives ahead of the Liberals by 38% to 33%. Can McGuinty turn it around again?
Posted by Éric at 9:57:00 AM