BC Liberals and NDP neck-and-neck, but advantage Clark

A new poll from Ipsos-Reid on the political situation in British Columbia shows that the BC Liberals and BC New Democrats are virtually tied, but if we look deeper into the bowels of the poll we can see that new Premier Christy Clark has the leg-up on her NDP opponent. 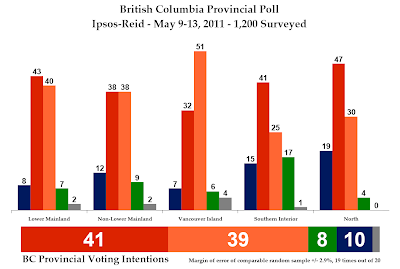 This Ipsos-Reid poll used an interesting methodology. While 1,200 British Columbians were polled in all, half were contacted via telephone and half via Ipsos's online panel. It's a sort of hybrid poll, and I wonder if this is something that we might see more of in the future. It could bring together the best of both methods.

According to the poll's findings, the BC Liberals are leading with 41%, closely trailed by the BC New Democrats who are at 39%.

The BC Conservatives come up in third with 10%, with the Greens in fourth at 8%. That is a good result for the Conservatives, and perhaps is an indication of the effect of having John Cummins, former BC MP for the federal Conservatives, as their future leader. His recent comments on homosexuality certainly won't help him increase his party's base, however.

Note: An earlier version of this post had mistakenly given the Green Party the same regional support levels as the BC Conservatives. Apologies.

It is a slim, statistically insignificant lead for Mrs. Clark, but a few other questions asked by Ipsos-Reid show why the BC Liberals are in a better position. Asked how likely they were to vote for each party, 48% of respondents said they were somewhat or very likely to vote for the BC Liberals, indicating the party still has some room for growth.

On the other hand, the BC New Democrats are nearer to their ceiling: 43% said they were somewhat or very likely to vote for them.

There is also some potential for growth for the Greens and Conservatives, who had a "likely" response of 25% and 24%, respectively.

In terms of who would make the best premier, 47% said Christy Clark. That makes her more popular than her own party. Adrian Dix of the BC NDP, on the other hand, garnered only 25% on this question. That is not a good sign for the NDP.

Technically, an election is not scheduled until 2013. That would give the NDP plenty of time to solidify their support. But rumour is that Clark may call an election this year, though her recent squeaker of a by-election win may cause her to be more cautious. British Columbians, however, seem game for an election: 46% said that a new one should be held this year, and this in a poll held only one week after the federal election. 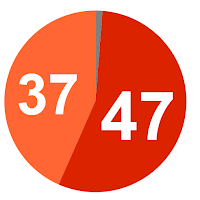 The BC Liberal vote being more efficient, ThreeHundredEight projects that with this poll Christy Clark would win 47 seats and hold on to her majority government. That is a drop of two seats from what her party currently holds in the legislature, those gains going to Adrian Dix and the NDP, which would win 37 seats and be returned to the opposition benches.

Nevertheless, this is a very close margin for the BC Liberals. And considering what happened in the federal campaign, this is not the kind of lead that can be taken to the bank. The BC Liberals have a majority government and while it appears that Clark would be more likely than not to win a new mandate on her own, it is most definitely not a sure bet. Whether British Columbians head to the polls for the second time this year may depend on how much of a gambler Mrs. Clark is.
Posted by Éric at 9:30:00 AM