Over the weekend, La Presse reported on a poll done by CROP on the PLQ leadership race in Quebec. The results were not surprising, but did show that Philippe Couillard is the odds-on favourite to win it. It also showed that a Couillard-led Liberal Party could oust the PQ from government. 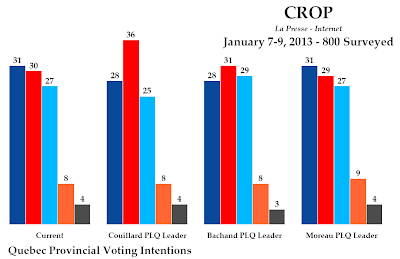 Since CROP's last poll taken Dec. 3-10, the Parti Québécois and Liberals have traded five points, with the PQ dropping to 31% and the Liberals increasing to 30%. The CAQ was up two points to 27%, while Québec Solidaire was down two points to 8%. Another 4% said they would vote for another party.

The game changes dramatically with Couillard at the helm of the Liberals, as he boosts the PLQ to 36%, taking three points from the PQ and two from the CAQ (and one from the magic of rounding). Because of their generally lower numbers among francophones, the Liberals can do less with this amount of support than the PQ but this would likely deliver a slim majority to the PLQ.

Raymond Bachand also improves things for the Liberals, picking up one point to increase the party's support to 31%. The CAQ gains two to hit 29% and the PQ falls three points to 28%. That is a bit of an odd result - why would the PQ lose support to the CAQ if Bachand becomes leader of the PLQ? It could just be a statistical anomaly or respondents changing their mind mid-stream for no particular reason, but it could also be possible that Bachand (a former sovereigntist) pulls a few voters from the Parti Québécois and pushes a few Liberals to the CAQ. That might be reading a bit too much into the numbers, though.

Pierre Moreau is a drag on Liberal fortunes, decreasing their support to 29% (a point made up by Québec Solidaire, of course). Broadly speaking, the Moreau and Bachand scenarios are similar enough to current voting intentions to conclude that neither of them does much to change the political landscape in the province, unlike Couillard.

But is Philippe Couillard just the latest shiny new leader that Quebecers like but will eventually reject? François Legault was supposed to be Premier by now instead of leading the third party in the National Assembly. His novelty quickly wore off once he became a politician again - a situation that could repeat itself if Couillard takes over the party. It would be less likely to occur under Bachand, who is a sitting MNA and, as former finance minister, already well known as a politician.

That is not to say that Couillard is an unknown - he isn't. Out of the three candidates, he had the lowest number of people saying they did not know him at 8%. Bachand was an unknown to 13% while Pierre Moreau was unknown to 47%. One of these things is not like the other.

Worse for Moreau, however, is that those who know him are mostly just familiar with his name. Fully 54% of PLQ supporters said they knew Couillard's history and the ideas he defends, while 43% said the same of Bachand. Only 9% said they knew that much about Moreau, compared to 47% of PLQ supporters who said they know just his name. That number was also high for Couillard (39%) and Bachand (46%), but they are more intimately known by a much larger proportion of the population.

Couillard is generally seen as the person who embodies change, honesty, and action, while Bachand is the good economic administrator (according to another set of questions). Both perceptions are good for winning elections, but Couillard's is probably what can win him a leadership race.

Either way, they don't want an election. Only one-in-three Liberal voters would want the next leader to force the downfall of the Marois government, the majority preferring that the Charbonneau Commission finish its work. That puts us in 2014 for the next election, which seems to be the most likely outcome at this stage.

By then, Couillard or Bachand will have had a year to get comfortable in the job and for Quebecers to get a good idea of what kind of Premier they might be. They generally like what they see right now, but there's no telling what they will think in a year's time.
Posted by Éric at 8:54:00 AM