With the deadline for becoming an official candidate about to pass on Sunday, the time has come to launch the endorsement rankings for the 2013 Liberal leadership race. With 87.3% of endorsement points, Justin Trudeau kicks off the race in a dominating position.

The page linked to above (and accessible by clicking on the 2013 LPC leadership graphic in the right-hand column) gives a detailed description of the endorsement rankings system, and a little bit of the rationale behind it. It also lists the endorsements that have been awarded so far.

I think that the endorsement rankings proved their worth in the races for the Bloc Québécois and NDP leadership in 2011 and 2012. The Bloc race was harder to track due to its low profile, but the rankings did pick Daniel Paillé to win it.

The NDP race was far more interesting, with endorsements coming from all levels of the party throughout the country. By the day of the convention, Thomas Mulcair was leading the rankings and was followed closely by Brian Topp. In the end, Mulcair beat Topp on the fourth ballot - an outcome that was projected during the interminable leadership vote. The endorsement rankings did quite well in assessing who the frontrunners were, with the notable exception of Nathan Cullen.

That was an interesting result, however. Of the candidates, Cullen was the most populist and least 'establishment', at least in terms of his proposal to co-operate with the Liberals and Greens. His campaign resonated with the rank-and-file membership, and he vaulted to third place ahead of Peggy Nash and Paul Dewar, who received far more establishment support. Cullen received few endorsements, especially outside of his native British Columbia, and so the rankings could not gauge him correctly.

Or perhaps Cullen's campaign was simply an example of one that cannot be tracked by something like the endorsement points system. The endorsement rankings are not a prediction of final outcomes, but rather one way to quantify the race and a method that will usually reflect how the race is going and where the candidates stand. While it missed out on Cullen, for example, it nevertheless pegged Mulcair as the frontrunner, Topp as the runner-up, Nash ahead of Dewar, and Niki Ashton and Martin Singh to be the bottom two. Not a bad result, and during the course of the convention the endorsement rankings only gave Mulcair the win on the fourth ballot.

At this stage of the Liberal race, however, the endorsement rankings suggest that it won't even go to a second ballot. Justin Trudeau has the lion's share (and a big lion it is) of endorsements so far, with the support of one-third of the Liberal caucus. 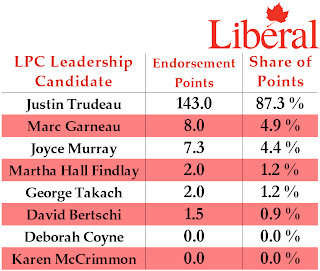 What to make of this? No one doubts that Trudeau has a wide lead over his rivals, and his impressive fundraising gives his campaign more than its fair share of credibility. I suspect, however, that if the vote were held today Garneau and Hall Findlay would take a much larger share of the vote. Perhaps that will be reflected as the race goes on and the two candidates start to get some endorsements. There's a very good chance that some of these candidates already have a few endorsements in the bag and are waiting for the right time to reveal them (say, after the first debate).

It should also be pointed out that Garneau, Murray, and Hall Findlay get a large portion of their points (and Hall Findlay all of them) from their own "self-endorsement". This is meant as a reflection of the pull they have within their party all on their own. Murray and Garneau are in their second term as MPs, and Murray was a provincial cabinet minister. Hall Findlay is a former MP (and leadership candidate). That is worth something in the endorsement rankings, as well as in the real world.

But the Liberal leadership race is not using a simple one-member-one-vote system. Instead, each riding will be given a value of 100 points and those points will be allocated according to how the members and supporters vote in each riding. So, for example, the vote of 200 members in a downtown Toronto riding will carry the same weight as the eight members in a riding in rural Alberta.

I will be doing the same thing for the endorsement rankings, except I will be breaking down the endorsements by province rather than riding. Here is how that breaks down (readers dating back to the NDP leadership race will recognize the graphics, which are based on CNN's presidential primary graphics. I used them in a post at the time, and liked them too much to not use them again).

Provinces without any endorsers yet (Alberta and Saskatchewan, as well as the territories) are allocated zero points at this stage, so the provincially weighted total is based on 26,300 points, rather than the full 30,800.

Broken down this way, Trudeau still leads by a wide margin. Even without the points from Alberta and Saskatchewan and the territories included, he has more than the 15,400 that will eventually be needed to win. He currently holds 71.5% of the total share of available points, with Murray trailing at 12.6%.

She gets bumped up from third to second due to her (self) support in British Columbia, a province worth 3,600 points. Garneau increases his share to 9.7% due to his (self) support in Quebec. Hall Findlay and Takach follow with 2.2% apiece, while Bertschi has 1.7%.

Hopefully the endorsement race will get a lot closer than this as the campaign unfolds. While I have little doubt that Trudeau would win if the vote was held right now, I am somewhat more doubtful that he would win with more than 70% on the first ballot. I suspect that it might go to a second or even third ballot at this stage. The endorsement tracker, then, is currently reflecting how much of an early juggernaut his campaign really is. The other candidates will need to gain some traction - and fast - in the first few debates if this is to become a real race.

(Note to readers: I based the list of endorsements on the Wikipedia page for the campaign, paying close attention to citations. Now that I have begun the tracker, I will be watching for endorsements myself. If there are any errors in my initial list of endorsements, please let me know.)
Posted by Éric at 11:31:00 AM