Five federal polls surveying 10,793 Canadians were conducted during the last month of 2012. They point to a continuing Conservative lead over the New Democrats, with the Liberals slipping away from a close third place. 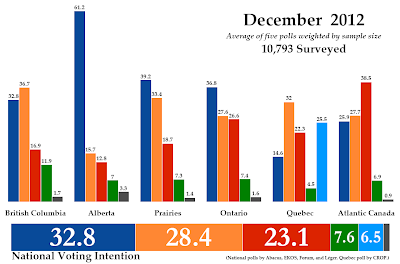 The Conservatives averaged 32.8% support during the month of December, down 1.3 points from where they stood in November.

The New Democrats were down 0.2 points to 28.4%, marking the sixth consecutive month of stagnation or decline for the NDP. December was their worst month since February, before Thomas Mulcair became the party leader.

The Liberals were down 3.2 points to 23.1% in December, a drop of about five points in the last two months. The Greens were up 3.5 points from November to 7.6%, their best result since February 2011, while the Bloc Québécois averaged 6.5% support. Other parties averaged 1.7% support, up 1.1 points from November.

To fully compare apples to apples, we have to look back to March and April, the last time that the four firms that polled nationally were in the field.

That might be too far in the past to be of much use, but nevertheless we see that since the last time these four polling firms were in the field within the same 30 days, the Conservatives and NDP have slipped to the benefit of the Liberals. But a month or two ago that Liberal number would have been even higher.

There was not much change in Ontario in December, with the Conservatives slipping 0.9 points to an average of 36.8%. The Conservatives have been very steady in the province, with between 35% and 39% support since November 2011. That is still well below their election result, however. The NDP was up a mere 0.1 point to 27.6%, while the Liberals dropped 2.6 points to 26.6% (relinquishing runner-up spot in the process). The Greens were up 2.4 points to 7.4%.

In Quebec, the New Democrats finally stopped their relentless decline, with a 0.4-point gain. They averaged 32% support in the province in December. The Bloc Québécois was up 0.8 points to 25.5% while the Liberals were down 5.4 points to 22.3% - halting five months of increase for the Liberals. The Conservatives were up 1.1 points to 14.6% and the Greens were up 2.5 points to 4.5%.

The Liberals hit their highest support since January 2011 in Atlantic Canada, picking up 4.3 points to lead with 38.5%. The NDP was down to its lowest level of support since April 2011 with a 5.1-point drop to 27.7%, their third consecutive month of decrease. The Conservatives were down 1.5 points to 25.9%, while the Greens were up one to 6.9%.

Finally, the Conservatives slipped 7.5 points to 39.2% in the Prairies, much of that drop going to the New Democrats, who were up 5.5 points to 33.4%. The Prairies have seen a lot of oscillation back and forth for the Tories worth eight to ten points almost every month since November 2011, so it is difficult to determine whether the gains and losses represent anything real. The Liberals were steady, however, decreasing by 0.3 points to 18.7%. The Greens were up 1.7 points to 7.3%. 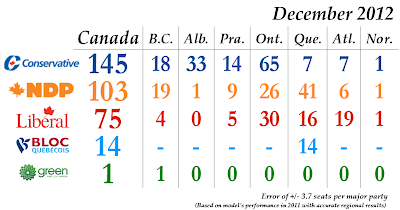 With these numbers, and using the 338-seat map, the Conservatives would win 145 seats, four seats fewer than they were projected to win on November's numbers.

The New Democrats would win 103 seats, an increase of 12, while the Liberals would win 75, down 10 from November.

The Bloc Québécois and Greens would win 14 and one seat, respectively.

The biggest NDP gains came in British Columbia and Quebec (up five seats in each province from November). The gains in Quebec are due primarily to the drop in Liberal support, rather than a gain in the NDP's numbers. The NDP also picked up a few extra seats in the Prairies and Ontario, but dropped one in Atlantic Canada.

The Conservatives picked up some seats in Alberta, Ontario, and Quebec, but dropped even more in British Columbia, the Prairies, and Atlantic Canada. In addition to the drop in support for the Conservatives in Ontario, their decline in these three regions tear a big hole in their electoral coalition.

For the Liberals, the loss of support in Quebec is particularly damaging. The party was on the upswing but a drop of more than five points in a month is not a positive sign for the party. While they are still well above their performance in the province under Michael Ignatieff, they will not displace the New Democrats as the alternative national option if they do not put a bigger dent in their support in Quebec.

On the whole, December was a relatively stable month for both the Conservatives and the New Democrats. Losses were made up with gains in other provinces. But the drop of more than three points for the Liberals (with decreases in every region except Atlantic Canada) might suggest that their "honeymoon" from the launch of the leadership race is already starting to wear off. The race is supposed to kick into a higher gear this month. We will have to see if it will reverse the slide.
Posted by Éric at 9:10:00 AM