The probability of the B.C. New Democrats winning the popular vote and, quite likely, the election on May 14 has increased from 91.7% to 94.6%, despite the B.C. Liberals making important gains in the B.C. Interior and North.

With the release of a new poll by Angus-Reid, the vote and seat forecasts for the upcoming British Columbia election have been updated. As of Jan. 18, the last day that Angus-Reid was in the field, the NDP is projected to win between 45 and 74 seats, with the most likely outcome being 57 seats. The B.C. Liberals are projected to win between nine and 40 seats, with 27 seats being the most likely result. If an election were held today, the New Democrats would have a 96.4% chance of winning it.

Indeed, the likelihood of the Liberals finishing first in the popular vote are extremely low: 5.4%, down from 8.3% on Nov. 30. In other words, in only one out of 20 cases would the Liberals be expected to overcome a 15.6-point deficit in fewer than 120 days before an election. The amount of runway remaining for Christy Clark is running out.

There is some good news for the Liberals, however. Their projected support in the Interior and North has increased 5.2 points to 38.8%, putting them less than three points behind the NDP, who are down 4.3 points in the region. As a result, the Liberals are now projected to win 16 seats, an increase of seven. The NDP dropped seven seats to 15, meaning the Liberals are in a better position to win more seats than the NDP in the region as a whole. However, the forecasted high and low results for the NDP are more favourable.

The NDP's position has also improved in Vancouver, where the party is up one point to 48% support. The Liberals dropped 4.2 points to 30.7%, and in the process dropped three seats to the New Democrats. The NDP is forecast to win no fewer than 17 seats, and as many as 38, in the metropolitan region on May 14.

The Greens made the biggest gain of any party in any region on Vancouver Island, up 6.1 points to 13%. They have displaced the Conservatives in third place, while the NDP and Liberals were both down more than a point (the NDP picked up a seat). The Greens are still not projected to be in range of any seats on Vancouver Island based on current levels of support, but the forecast does put two seats in play for the party. The most likely scenario, though, is an NDP sweep. 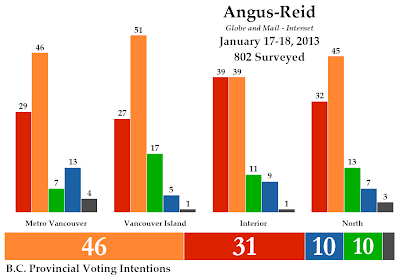 The poll that prompted the projection update did not have too many changes from Angus-Reid's last survey from November. Since then, the New Democrats dropped one point and decreased to 46% support, while the Liberals were up two points to 31%. The Conservatives were down two points to 10%, while the Greens were up one to 10%. Support for other parties and independents increased one point to 3%.

All of these shifts are within the margin of error (assuming random samples, of course, which an online poll does not have). Angus-Reid also still does not put sample sizes in their regional breakdowns, something which absolutely should be done.

The Liberals are certainly trending upwards in Angus-Reid's polling: 22% in July, 25% in September, 26% in October, 29% in November, and now 31% in January. But the party has been gaining one to three points each month, and only four months remain between now and the election. That means if the trend continues, the party could pick up between four and 12 points - putting them between 35% and 43%. Over that time, the NDP has scored between 46% and 49% in every poll, without any discernible trend. If the Liberals do get to over 40% on election night, much of it will likely have come from the Conservatives. It won't be enough unless they start seriously eating into NDP support.

In the Interior, however, the Liberals moved into a tie with the NDP at 39%. The Greens placed third with 11%, while the Conservatives dropped seven points to 9%. That drop in Conservative support appears to be real, but the gains of the Liberals and the small loss incurred by the NDP could be statistical wobbling. It does make intuitive sense, though, to assume that the gain made by the Liberals is not an anomaly and that Conservative support is indeed drifting disproportionately to the Liberals in the Interior. That is not necessarily trouble for the NDP as they still hold wide leads in Vancouver and on the Island, but it is the first step towards a Liberal recovery, if one is to occur.

The poll showed no significant changes in personal ratings for the leaders, with Adrian Dix leading on the Best Premier question with 29% to 19% for Clark and 5% for Cummins. Dix still has the best approval rating at 46% to 34% disapproval. Clark scored 31% and 56% on approval and disapproval, while John Cummins's approval rating is a woeful 13%. His disapproval rating is almost as high as Clark's, at 51%, and this despite 36% not sure of their opinion of him (compared to 13% not-sures for Clark).

Dix still holds a major advantage over Clark, as he is seen as the best leader on the issues of health care, crime, the economy, education, and federal-provincial relations. He only trails Jane Sterk on the environment, as one might expect. The top issue is still the economy for British Columbians (increasing to 28%), and Dix still has the edge over Clark on a question that is supposed to be an NDP leader's Achilles' heel. It is hard to see a route for a comeback for the Liberals.
Posted by Éric at 2:40:00 PM