With a new poll from the B.C.-based Mustel Group hitting the wire yesterday, the projection now shows a slightly closer race between the B.C. Liberals and B.C. New Democrats heading towards the May 14 election. Nevertheless, the probability that the NDP will win the popular vote on that day is still 93.4%, down from 94.6% as of Jan. 18.

The Mustel poll was in the field between Jan. 11 and 21, providing only a little bit of newer information than the Angus-Reid poll that was in the field Jan. 17 and 18. The margin in the poll (10 points) is the narrowest in any survey since March 2012, though that poll was also by Mustel. The last time that the gap between the two parties was 10 points or less on a regular basis was in November 2011. So this poll does show some change.

In terms of seats, the NDP has slipped one to 56, with the Liberals increasing to 28. One independent is projected to be (re-)elected as well. Nevertheless, despite the decrease in the NDP's seat projection, the party would still have a 95.2% chance of winning an election held today. The projected seat margin is simply too wide for the Liberals to be able to overcome it, even assuming the polls and the model are faulty (these are taken into account to calculate the probabilities). The projected low for the NDP is still in majority territory, with the party at between 44 and 69 seats. The Liberals could win between 13 and 41 seats, while between zero and four independents could be elected.

Looking forward to May 14, the forecast still considers a Liberal win to be a possibility. Their probability of winning the popular vote has increased slightly from 5.4% to 6.6%, but those are still very long odds. The forecast high for the Liberals is only 41.9%, while the forecasted low for the NDP is 40.5% (note that the projected vote has yet to fall outside the previous update's forecast). But if the numbers did hit those extremes and the regional distribution was especially beneficial to the Liberals, they could win as many as 59 seats. That is an absolutely best case scenario, however. The NDP could also win a landslide of 82 seats. With so much time still remaining between now and the election, almost anything is possible.

Regionally, the New Democrats slipped in metro Vancouver to 47.3% from 48%, and were down two seats due to the Liberals increasing by 1.4 points to 32.4%. The Conservatives took the biggest hit, dropping 1.7 points to 11.6%. 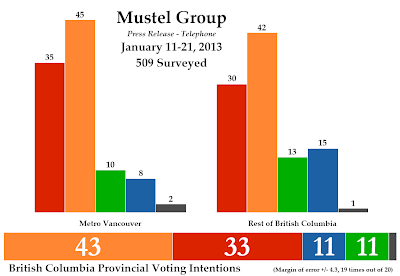 The Mustel poll was relatively small, with a sample of 509 British Columbians. That is standard for the firm, however. They were last in the field Sept. 4-19, and since then the NDP dropped two points to 43% and the Liberals gained one to reach 33%.

Though that is a narrowing of the gap by three points, the +/- 4.3% margin of error needs to be emphasized. Neither of those shifts were statistically significant, and rather than consider that the gap could be even narrower we should, based on other data, lean in the opposite direction.

Mustel passed along some interesting regional variations, but the extremely small samples make them almost meaningless. But they do make some intuitive sense: the New Democrats doing very well in the city of Vancouver but in a neck-and-neck fight with the Liberals in the suburbs, and better numbers for the NDP in the north than in the southern interior.

But the numbers on Vancouver Island are the most fascinating. They put the Greens and Liberals in almost a tie for second place, while in and around Victoria itself the Greens are running a very strong second. However, the small sample sizes (with a crippling MOE of +/- 17 points) could make the numbers nothing more than a mirage. Nevertheless, they do match some of the scuttlebutt for the region.

The Mustel poll continues to show a gender problem for Christy Clark, as her party is running only four points behind the NDP among men but 17 points among women. Her approval rating stands at 38% in this poll, unchanged from Mustel's last survey, while her disapproval is 45%. Adrian Dix's approval rating increased to 45%, while his disapproval rating dropped six points to only 24%. But 32% still expressed no opinion.

Having a survey from Mustel is great for the aggregation, as they use live callers. Angus-Reid and Ipsos-Reid (at least in B.C.) use online panels while Forum uses IVR. It is good to have a mix of methodologies. But because of those different methodologies, and the somewhat different results they produce, it is difficult to assess what is going on in British Columbia. Is the gap narrowing? Have the New Democrats moved away from 50% support? We need more data.
Posted by Éric at 11:56:00 AM