Brian Pallister became the new leader of the Manitoba Progressive Conservatives in 2012 and he ended the year on a high, with a Probe Research poll for the Winnipeg Free Press giving his party the edge over the governing New Democrats. Even so, he'd still lose an election with these results. 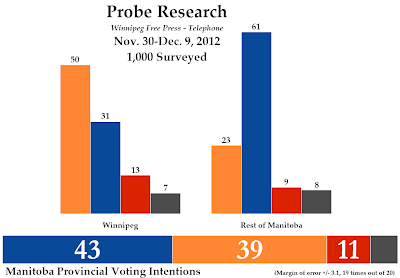 Probe was last in the field Sept. 19-Oct. 14, and since then the Progressive Conservatives picked up five points to hit 43%. That gave them a four-point advantage over the New Democrats, who were down six points to 39%.

Both of these shifts were outside of the telephone survey's margin of error. For the NDP, this is the first time they have registered below 40% support since March 2011.

The Liberals were unchanged at 11% and support for other parties (primarily the Greens) was up one point to 7%.

Electorally, however, this means very little. Because of the geography of Manitoba's ridings and the stark difference in voting intentions between Winnipeg and the rest of the province, the Progressive Conservatives would still lose an election by a wide margin on these numbers.

This is primarily due to the New Democrats' resilient lead in Winnipeg, where they were up by 19 points. They had 50% support to 31% for the Tories. The Liberals were third with 13%. That gives the NDP the command of most of the city's 31 ridings.

The Tories have the advantage in the province's remaining 26 ridings, but 31>26. The Progressive Conservatives were up 15 points since Sept.-Oct. in the rest of Manitoba and led with 61%, with the NDP dropping 12 points to 23%. The Liberals were at only 9% support.

With these province-wide numbers, the New Democrats would still win 34 seats to the Tories' 21. The Liberals would manage two seats, both in Winnipeg.

The NDP would win 23 of their seats in Winnipeg, while the PCs would win 15 of theirs outside of it. But this projection is based on province-wide numbers only (though that didn't hurt the Oct. 2011 final projection, which had an accuracy of 98.2%). With the yawning gap between the NDP and the PCs in Winnipeg and between the PCs and NDP outside of the capital, it is likely that the results would be even more lop-sided between the two regions. In the end, though, the New Democrats would still easily walk away with another majority government.

What might it take for the Progressive Conservatives to defeat the New Democrats without any disproportionate increase in support in Winnipeg? Assuming the Liberals and Greens remain unchanged and the swing between the Tories and NDP is uniform throughout the province, the PCs would need to have about 47% support to 35% for the NDP (a 12-point margin) to win an outright majority.

Clearly, if Brian Pallister wants to become the next premier of Manitoba he will have to woo Winnipeggers in particular. If his party is not able to make a breakthrough in the capital, and instead piles up larger majorities in rural Manitoba, the New Democrats could continue to govern the province even with a big deficit in the popular vote.
Posted by Éric at 9:04:00 AM