How the OLP leadership vote went down

This weekend's Ontario Liberal leadership convention did not have the kind of surprise some had thought possible - even likely - in a delegated convention. But Kathleen Wynne did emerge victorious after trailing on the first and second ballots behind Sandra Pupatello. How did the vote unfold throughout the day?

The initial results were probably the biggest surprise of the day, as the delegate count between Pupatello and Wynne was separated by only two votes, rather than the 41 that separated the two candidates among elected delegates. Many, including myself, expected Pupatello to be more of a favourite among the ex-officio delegates, but instead it appears that Wynne performed best among the party establishment. 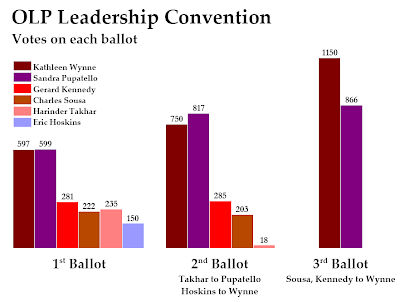 It is difficult to assess exactly how the ex-officios voted, as we do not know the number of elected delegates who were present at the convention. It was not 100% turnout, as the total valid votes on the first ballot numbered 2,084. The number of elected delegates should have numbered 1,857, but instead was closer to 1,765, as the OLP has told me that some 320 ex-officios registered at the convention.

So, about 92 elected delegates were not able to make it to the convention. We don't know how these were distributed between the candidates. Could Pupatello's delegates, many of whom came from the northern, southwestern, and eastern corners of the province, have been no-shows in higher proportions?

If we apply this to all of the candidates, we get the number of elected delegates present at the first ballot as 484 for Pupatello, 445 for Wynne, 247 for Gerard Kennedy, 232 for Takhar, 194 for Charles Sousa, 100 for Eric Hoskins, and 64 independents.

It was Wynne's support among the ex-officios, plus her likely advantage among independents, that gave her the surprising first ballot results and dulled any sort of momentum Pupatello could have built with a strong first ballot performance.

At that point, it was looking far more difficult for Pupatello. But she was still the favourite at that stage, as it was assumed she would pick up the endorsements of Takhar and Sousa, enough to give her the win. But Hoskins's strong support among the ex-officios gave him a bit more weight in the convention, and his endorsement of Wynne helped her more than his numbers suggested. And whereas people were not sure where Hoskins would go before the convention, Takhar's swing to Pupatello was expected. The momentum was Wynne's. 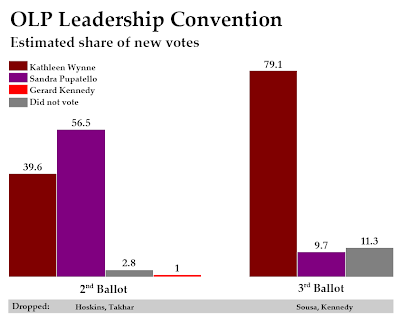 Pupatello made the biggest jump on the second ballot, gaining almost 57% of the new ballots on the table. Wynne took 40%, while 3% did not vote and another 1% went to Kennedy.

Pupatello increased her haul by 218 ballots to 817, or 39.4%. She picked up almost the entirety of Takhar's delegates. Wynne, however, gained 153 votes - more than the 150 that Hoskins had made available to her. She was up to 750, or 36.2%, having apparently taken some votes from Sousa, who dropped 19 to 203, or 9.8%. This should have been Kennedy's chance to make a move, but instead he gained only four votes, giving him 285 or 13.7% of the total. His path to victory was now definitively blocked.

(Note: More than just Sousa's delegates would have supported other candidates on the second and third ballots than the one they were initially elected to support. Estimating that kind of cross-pollination is near-impossible, so for simplicity I assume that delegates stuck with their candidate throughout the convention. If they didn't, the ones swapping from one candidate to the other probably cancelled each other out.)

If Sousa would have gone to Pupatello after the second ballot, she likely could have won it. Kennedy was always expected to go with Wynne, and the sum of their endorsements would have made it incredibly close (1,038 votes to 1,035). How the ex-officios would have swung in such a scenario, in order to give someone a respectable margin, is impossible to guess.

Instead, Sousa and Kennedy went over to Wynne and sealed her victory. She did not get all of their supporters, however, as 11% of the newly available delegates did not vote and 10% went over to Pupatello. She did get 79%, however, more than the 59% she needed in order to move ahead of Pupatello on the last ballot. But the results were definitive: 1,150 or 57% for Kathleen Wynne against 866, or 43%, for Sandra Pupatello.

This sort of delegated convention is exciting, as the turning points are obvious and, with the candidates moving around the floor with their sign-waving supporters, you have the benefit of actually seeing support swing from one side to the other. There were a few moments that pointed towards Wynne's victory: her stronger than expected first ballot results, the endorsement of Hoskins (who himself did unexpectedly well), and the double endorsement of Sousa and Kennedy. It is possible that each of these endorsements could not have occurred without the turning points that preceded them. However, it might be Pupatello's weaker-than-expected first ballot result that sealed her fate. The ex-officios hadn't sided with her as much as everyone thought they would, and that made all the difference.

How will the Ontario Liberals do now that Kathleen Wynne is their leader? We'll find out over the next few weeks, but it may take a lot longer for opinions to firm up. Conceivably, Wynne as Premier makes a snap election less likely, so she may be able to give herself the time to get ready for the next vote. It should be an interesting few months either way.
Posted by Éric at 9:26:00 AM