Two provincial by-elections are being held in Manitoba today, and both are expected to be easily won by the opposition Progressive Conservatives. But that doesn't mean the two are without interest: as the first opportunity for (some) Manitobans to express their opinions of the NDP government since the PST increase of 2013, the results could be revealing. It will also serve as a first test for the third-party Liberals and their new leader, Rana Bokhari. 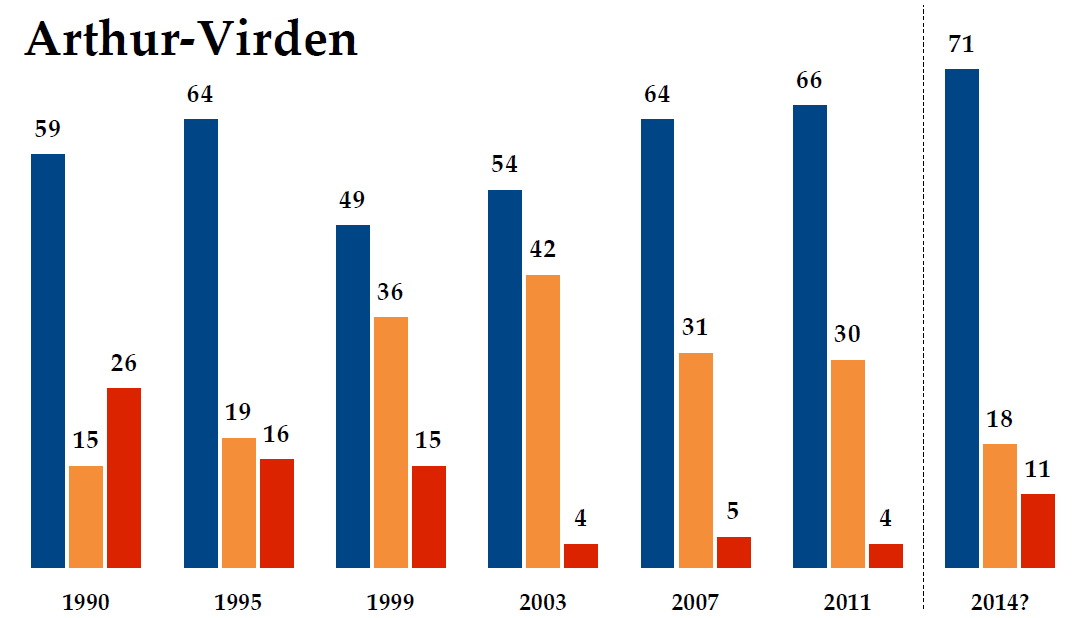 Arthur-Virden was vacated by Larry Maguire after he narrowly won the federal by-election in Brandon-Souris. Maguire had represented the riding since 1999, and the PC vote in Arthur-Virden has been growing in every election since. In fact, the 66% of the vote he took in 2011 was the best performance by a Tory candidate for some time. This makes it likely that Doyle Piwniuk will be able to retain the riding - and with the NDP vote tanking province wide he may be able to take as much as 71% of ballots cast (as a simple swing from the last Probe Research poll would suggest).

The New Democrats peaked in 2003 here, when they captured 42% of the vote. Their share had been growing as the Liberal vote slipped to just 4% that year, where it has roughly remained. But the NDP has dropped to around 30% over the last two elections. With their sinking poll numbers, their candidate Bob Senff could drop further to around 18%. The Liberals, who have put up Floyd Buhler, could put up their best result since 1999. The Greens also have a candidate in the race. 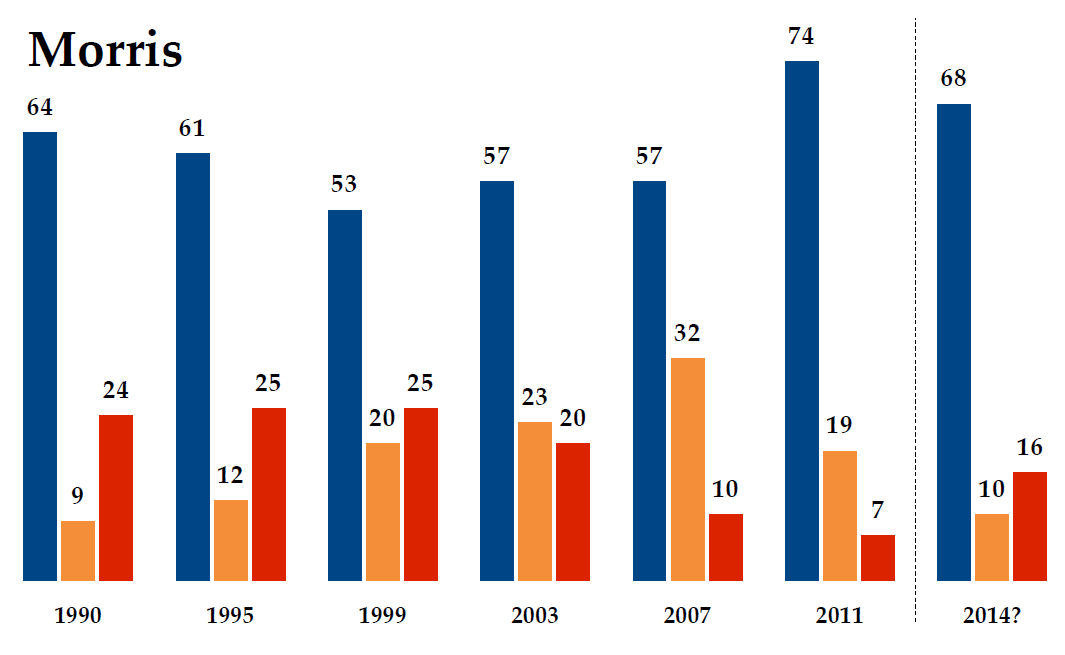 The by-election in Morris follows the resignation of PC MLA Mavis Taillieu last year. The riding has been solidly PC for a very long time, and 2011 represented a strong year for the party. Shannon Martin should be able to take the riding comfortably.

The New Democrats saw their vote increase in elections between 1990 and 2007, peaking at 32% that year. But it dropped significantly in 2011 to just 19%, and Dean Harder is in danger of falling into third place for the first time since 1999, based on the provincial polls. Jeremy Barber of the Liberals could finish second, after the party dropped to just 7% in 2011. They have a better base here than they do in Arthur-Virden, however, as they took one-fourth of the vote between 1990 and 1999, and were still at 20% in 2003 (when the party was at just 4% in Arthur-Virden). A Green and independent candidate are also in the running here.

So the question is not whether the Progressive Conservatives will hold these ridings - they absolutely will. Instead the question is whether the governing New Democrats will be able to hold on to second place in both Morris and Arthur-Virden. The NDP's vote has fallen dramatically province wide, but especially so in the rural parts of the province. It will be interestingly to see if the Liberals can make a splash. They have a good shot at it: the party has traditionally performed respectably in Morris and their federal cousin almost stole the riding of Brandon-Souris, which contains Arthur-Virden, in November.

The results won't make any real difference in the legislature, but if the Liberals put up some strong numbers the New Democrats may have to be more concerned with the party in their rear-view mirror than the one charging ahead of them.
Posted by Éric at 9:13:00 AM