It was a long desert we walked through, with just one national federal poll released between Nov. 29 and Jan. 21, but yesterday Abacus Data broke the polling silence with a survey showing that not much has changed in the interim.

Just a friendly reminder that my eBook, "Tapping into the Pulse", a polling retrospective of 2013, can be pre-ordered here. 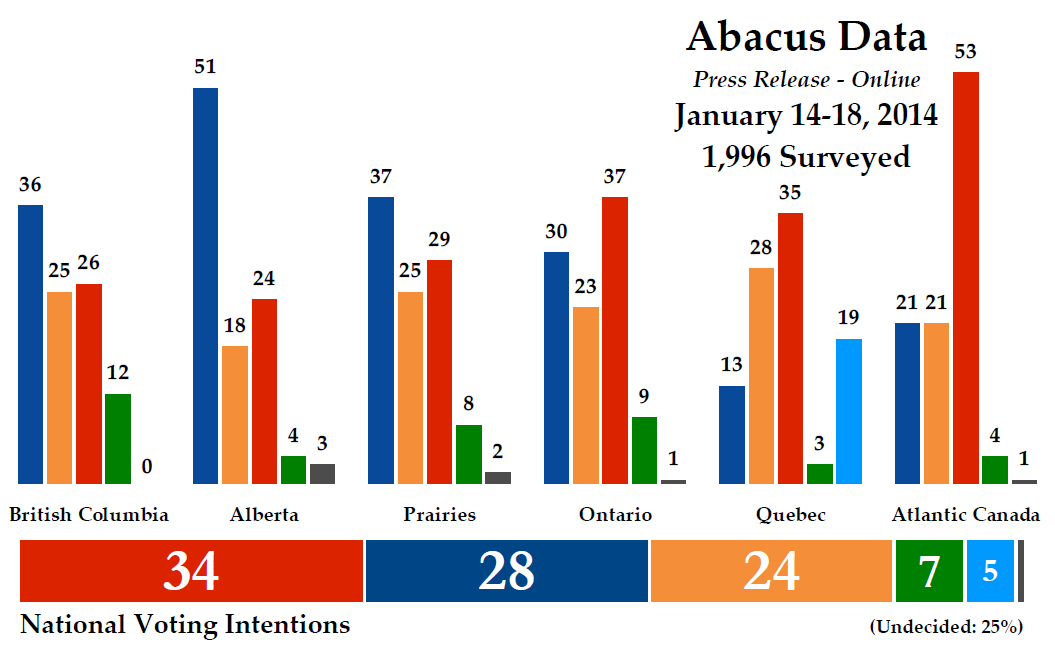 The last poll publicly released by Abacus Data was conducted on Oct. 18-22, but their report refers to the changes in support from their last survey conducted a little later in October. The voting intentions results of that poll were not released at the time, and instead just the numbers related to the then unfolding Duffy-Wright scandal were published. For that reason, I'll be comparing numbers to the Oct. 18-22 poll in this post.

Since that poll, the Liberals have picked up two points and continue to lead with 34%. The Conservatives dropped four points (outside the margin of error of probabilistic samples of comparable size - technically, as an online poll these margins don't apply) to 28%, while the New Democrats were up one point to 24%. The Greens were up two points to 7%, and the Bloc Québécois was unchanged at 5%.

One-in-four respondents were undecided, a drop of six points since the Duffy poll at the end of October. I mention this because it is interesting to see how voting intentions changed when looking at the entire sample: where did those undecideds go? The Liberals picked up three points among the entire sample, as did the NDP, while the Tories dropped two. What this means is that, while the Liberals and NDP only made small proportional gains among committed voters, they actually made larger gains among all voters.

The Abacus report (PDF) is full of these sorts of interesting details, as they include both the raw and weighted sample sizes and the full results for all demographic breakdowns among the entire sample as well as the sample of decided voters. It is the kind of standards of transparency every polling firm should be meeting, but very few do.

For the regional numbers, the only significant shift in support occurred in Ontario. There, the Conservatives fell eight points to 30%. The Liberals moved ahead and increased their support to 37%, while the NDP was virtually unchanged at 23%. No other movement would be considered significant, with the insignificant exception of a Green spike from 2% to 8% in the Prairies.

The Conservatives continued to lead in the Prairies with 37% to 29% for the Liberals, while the Liberals led in Quebec with 35% to 28% for the NDP. In Atlantic Canada, the Liberals had 53% and the NDP and Tories were tied at just 21% support.

But despite the six-point lead in national voting intentions, the Liberals would only win a plurality by four seats. This is due to the strong numbers the Conservatives put up in the West, where they win a disproportionately high number of seats. They also aren't weak enough in Ontario to give the Liberals a majority there, while in Quebec the NDP wins a lot of close races.

In total, the Liberals would likely win about 131 seats on the electoral map that will be in force in 2015, while the Conservatives would win 127 seats and the NDP would take 76. The Greens and Bloc would win two seats apiece.

Each caucus would emerge rather unbalanced. Just over half of Conservatives seats would come in the West, while only 10% would come from Quebec and Atlantic Canada. Almost 85% of Liberal seats would be won east of Manitoba, while three-quarters of NDP MPs would either be from Ontario or Quebec.

Not every poll that has shown these sort of national numbers have shown such strong regional divisions, so it is not a given that the Liberals would be unable to win a larger minority with these national support levels. But it does demonstrate how efficient and inefficient the Conservative and Liberal votes can respectively be. The Alberta and Prairie numbers are not unusual in this regard, but the ones in B.C. are somewhat different than what we saw at the end of 2013. If the Tories have moved ahead there by 10 points, that makes it very difficult for the Liberals to pull ahead in the seat count. We'll see what other surveys show in the coming weeks.

This sort of scenario doesn't give the Liberals an unworkable minority, however. If they were so inclined, the Liberals and NDP could combine for a majority government, at least in practice if not officially.
Posted by Éric at 11:00:00 AM