Last night's results in the two Manitoba by-elections in the ridings of Morris and Arthur-Virden showed that Greg Selinger's NDP government has indeed taken a big hit from the increase in the PST that started their poll numbers spiraling downwards in 2013. Though the winners were never in doubt - both ridings are solidly Tory - the NDP dropped more than half of its vote share from the 2011 provincial election and, overall, finished third on the night.

We'll start in Arthur-Virden, where the results were particularly bad for the New Democrats. 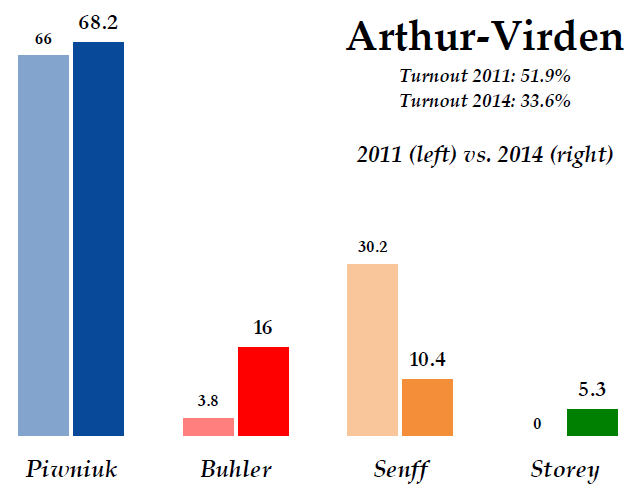 PC candidate Doyle Piwniuk won handily with 68.2% of the vote, improving upon Larry Maguire's performance in 2011 and putting up the best numbers for the Tories since at least 1990.

Liberal candidate Floyd Buhler finished second, surging from 3.8% in 2011 to 16% last night, the best performance for the Liberals in Arthur-Virden since 1995. He was the only candidate last night (excluding the Greens and the independent Ray Shaw, who did not run in 2011) to get more raw votes despite the steep slide in turnout. Buhler received 738 votes, compared to 288 for the Liberal candidate in 2011.

The Greens' Kate Storey captured 5.3% of the vote. 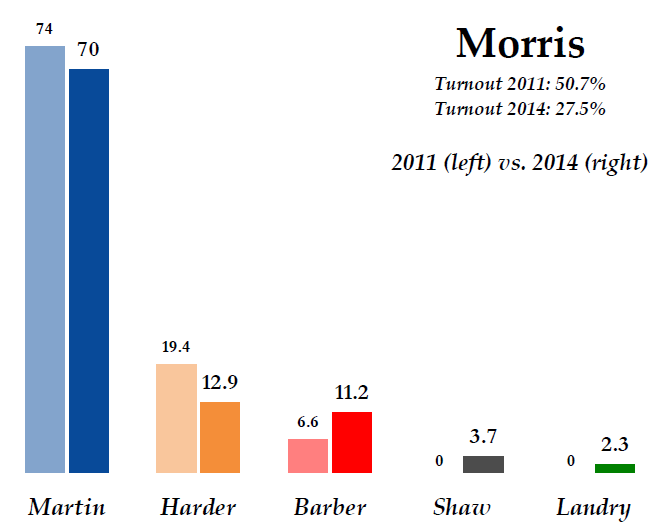 There was less movement in Morris, but again the NDP lost support to the Liberals and the Greens. PC candidate Shannon Martin's vote share was slightly lower than Mavis Taillieu's, at 70% to 74%, but that is a minor quibble when you take more than two-thirds of the vote.

Shaw took 3.7% of the vote while Alain Landry of the Greens captured 2.3%.

Overall, it was a rough night for the New Democrats. In these two ridings in 2011, they had captured just under 25% of votes cast. That fell to less than 12% last night. The Liberals increased their share from 5% to 14%, while the Tories held firm.

Average vote share across the two ridings (eliminating the difference of turnout between the two) was 69.1% for the Progressive Conservatives, 13.6% for the Liberals, 11.7% for the New Democrats, and 3.8% for the Greens.

That means the Liberals picked up 8.4 points last night, primarily from the NDP. They dropped 13.1 points, with the remainder going to the Greens and Shaw. The PCs dropped by just 0.9 points.

If we apply those proportional changes to the province-wide results in 2011, we get the Tories at 43%, the NDP at 22%, and the Liberals at 20%. That is remarkably close to the last Probe Research survey, that put the Tories ahead with 48% to 26% for the NDP and 20% for the Liberals. These ridings did just about as expected in that respect, and the results go a long way to confirming the NDP's slide. It also suggests that the Liberal support recorded in the polls can actually manifest itself at the ballot box - at least in a low-stakes by-election. But what about a general election?
Posted by Éric at 9:48:00 AM