If Pauline Marois was wavering over the possibility of an election early in 2014, she might not anymore. In fact, with the numbers reported in yesterday's Léger/Le Journal de Montréal poll, she may have to pull the plug herself if she wants to send voters to the polls soon. 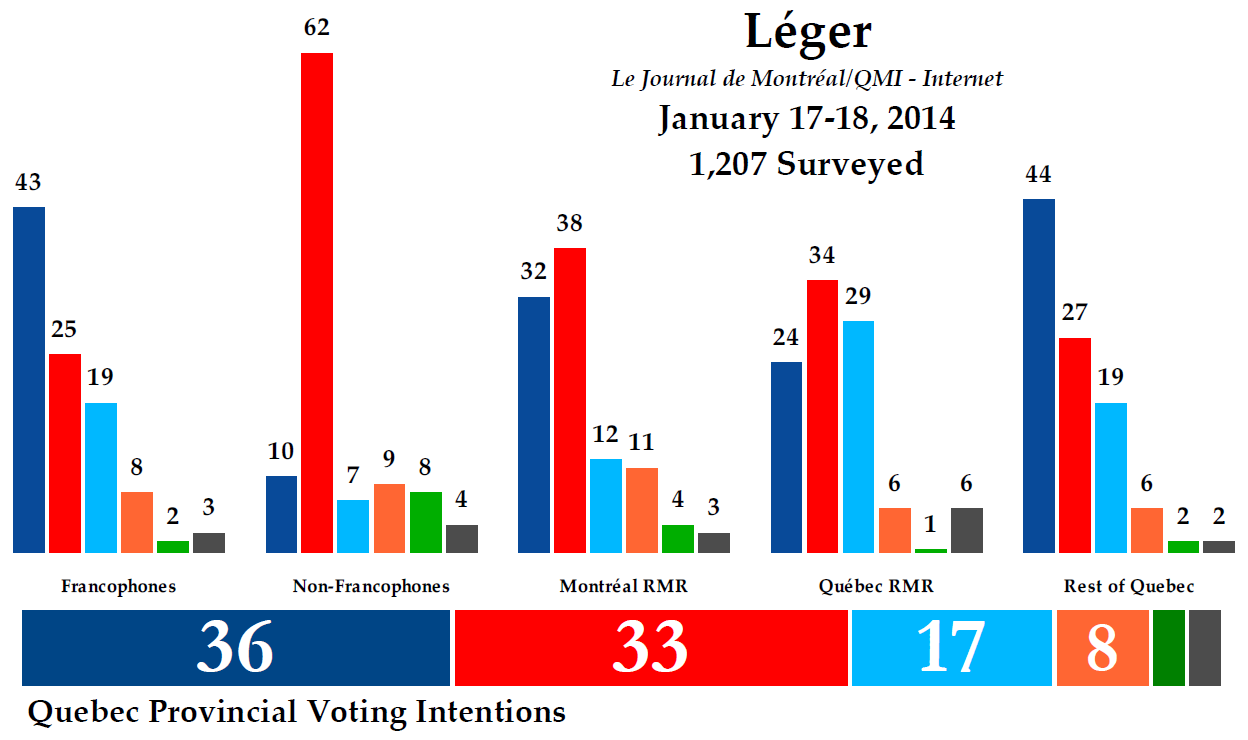 The Parti Québécois moved into the lead in Léger's polling with 36% support, up four points since the firm was last in the field on Dec. 2-5. The Liberals dropped four points to 33%, their worst result since March 2013.

None of these shifts in support would be considered statistically significant if this online survey had a probabilistic sample, though the numbers recorded elsewhere in the poll suggest the PQ is making gains. The number of undecideds was 6%, while 13% in total either said they were undecided or refused to respond to the question. That was a drop of seven points since the December poll.

Contrary to how Léger normally reports its findings, this survey included demographic breakdowns. These showed the PQ ahead among men by seven points, but among women by only one. Considering the sample sizes, the PQ and Liberals were generally tied among voters between the ages of 18 and 34, while voters between the ages of 35 and 44 split primarily between the Liberals and the CAQ. The PQ was definitively ahead among 45-54 year-olds and had a wide advantage among 55-64 year-olds (though not conclusively so). Among the oldest cohort, the PQ and Liberals were tied.

This is somewhat unusual. The PQ has traditionally done better among younger voters while the Liberals had the edge among older constituents. While this does suggest that the PQ's electorate is getting older (a long-term problem), in the short-term that is not a bad thing for the party: older people vote.

With these levels of support, and thanks to their considerable advantage among francophones, the Parti Québécois would likely win a majority government of some 70 seats. The Liberals would take 47 seats, the CAQ would hold six, and QS would retain their two.

The regional divide here is clear: 60% of the PQ's seats come outside of the two metropolitan regions (though the party does win most of the ridings around the island of Montreal). The Liberals win just over 60% of their seats in the Montreal region, while the CAQ is reduced to their base around Quebec City.

Leadership seems to be an important driver in this swap between the PQ and Liberals. Marois picked up six points since December to be the choice for premier of 27% of respondents, while Philippe Couillard fell four points to 20% (he has dropped 10 points since June, and was the choice of only 63% of Liberal voters). This makes Marois a bit of a drag on her party (which had 32% support among all respondents, including undecideds) but Couillard a much more significant one as the Liberals had 28% support among all respondents. François Legault (the choice of 13%) and Françoise David (8%) do not have this issue. They are polling at about the same levels as their parties.

Satisfaction with the government was up five points to 38%, while dissatisfaction dropped six points to 56%. Support for sovereignty stood at 37% among all respondents, or 42% to 43% among decided respondents. That is up three or four points since December.

The parties are effectively carving out their issues among the electorate. When asked what would be the decisive issue for them in an upcoming election, 23% of respondents said healthcare, 16% said jobs, 11% said the deficit and the debt, and 10% said the values charter. Healthcare was a top issue for supporters of all parties, but the second most important issue was jobs among Liberals, the debt/deficit among Caquistes, and the charter among PQ supporters. That lines up very closely to the major issues being pushed by each party (QS supporters identified education and the environment as their top issues after healthcare).

On the charter itself, 48% said they supported it (an increase of five points) while 41% said they opposed it. The split was along linguistic lines, supported by 57% of francophones but opposed by 65% of non-francophones. It was opposed by 71% of Liberal voters but supported by 86% of PQ voters. The CAQ is split 46% for to 47% against, QS less so (32% for, 61% against).

Oddly enough, though, there is far more support for the major plank of the charter (or at least the plank that has gotten the most attention). Fully 60% of respondents said they supported banning public employees from wearing ostentatious religious symbols or clothing, including 69% of francophones and one-in-four non-francophones. Support by party here was almost universal among PQ voters but also among a majority of CAQ and QS voters. Opposition to this dropped to 59% among Liberals.

This would suggest that most Quebecers agree with the idea of the charter but many of them are opposed to its implementation. This could be driven in part by partisan considerations as well as a desire to avoid the difficult debate surrounding the issue in the province.

Respondents were split on who would win the next election, with 38% saying the Liberals would take it and 36% saying the PQ would win. By a margin of about two-to-one, Quebecers thought the next government would be a minority one. But as we saw in Ipsos-Reid's B.C. exit poll, perception does not equate to reality.

What does this mean for an election in Quebec? The PQ is likely to be a lot more bullish, as well as keen on being defeated on the charter itself (or simply pulling the plug and blaming the inability to get the charter passed). The CAQ is still being pushed out, but may just want to get it over with (Legault does not seem the patient type). That leaves the Liberals, who are likely not feeling very confident under Couillard's leadership. Supporting the PQ, however, seems out of the question for his party. Unless the CAQ decides to support the PQ on the charter as well as on a budget (the latter may be more difficult for Legault), an election is inevitable. Getting the CAQ on board for only one or the other won't cut it.
Posted by Éric at 10:34:00 AM