What if the right was still divided in 2011?

After the Conservatives won a majority government in the 2011 federal election, there was much discussion about how a united left, or at least a merger of the Liberals and NDP, would have changed the outcome entirely. But what if we flip that hypothetical question on its head, and instead ask what would have happened if there wasn't a united right?

This scenario would assume that the Canadian Alliance and Progressive Conservatives never merged, and that the two parties continued to exist as separate entities. To estimate how this division of the centre-right vote would play out, I've made some simple calculations (there's no reason to inject too much complication into this hypothetical exercise). The vote that the Conservatives took in 2011 in each province or region remains exactly the same, except that it is divided between the CA and the PCs in the same proportion as in the 2000 election. Support for the other parties is similarly unchanged.

In each province or region, the party that had the most support in 2000 is considered the leading party for the calculations, so that they win all the seats in the region - except in Alberta and the Prairies, where I have given the PCs one seat (they won a single seat in each of these regions in 2000).

Of course, this doesn't take into account how a more divided political landscape would change the results. It assumes that all else remains equal - the New Democrats still surge in Quebec, the Liberals and Bloc still collapse, the Greens still do well in British Columbia, etc. We could endlessly speculate on how the presence of two parties on the right would have changed things (and feel free to do so in the comments section), but for the purpose of this exercise we are leaving these questions aside.

Note - because of how I have done this, the results likely under-estimate how the two right-of-centre parties would actually do. It assumes that the division of the vote is uniform within each province, though in reality you'd have some regions where the CA would get a larger proportion of the vote and other regions where the PCs would do better. But let's also leave that aside (the calculations assuming a Liberal-NDP merger have almost always disregarded these sorts of questions, not to mention the possibility that some Liberals and New Democrats would not vote for such a merged party). 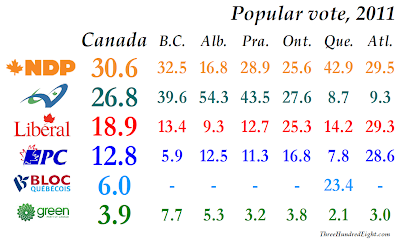 Jack Layton and the NDP win the party's first election in its history, taking 30.6% of the vote. The Canadian Alliance places second with 26.8% of the vote, while the Liberals come in third with 18.9%. The Progressive Conservatives take 12.8%, while the Bloc and Greens bring up the rear.

The NDP wins Quebec and Atlantic Canada, and finishes a close second in Ontario. The Canadian Alliance wins British Columbia, Alberta, the Prairies, and Ontario, but collapses east of the Ottawa River. The Liberals manage a tight race in Ontario and Atlantic Canada, but don't win a single region, while the Tories come closest to coming out ahead in Atlantic Canada (thanks to Peter MacKay?).

Right away, it is clear how this division changes things dramatically. The West is still safely in CA hands, but Ontario becomes an unwieldy four-way race and Atlantic Canada is a close three-way contest. And it makes it possible for a party to win the election with less than 1-in-3 support.

In terms of seats, it would mean another minority government. But who would lead it? 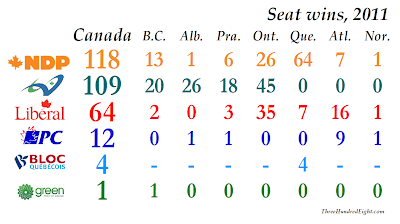 The New Democrats win 118 seats, almost tripling their historic best, while the Canadian Alliance continues to grow with 109 seats. The Liberals fall to just 64, while the Progressive Conservatives win 12, the Bloc four, and the Greens one.

The New Democrats win the majority of seats in Quebec, but come up short in every other region. The Canadian Alliance wins the majority of seats in the four western provinces and a plurality in Ontario, but are shut out east of the province. The Liberals win half of the seats in Atlantic Canada and come up second in Ontario, while the Tories place second on the east coast but are shut out in Quebec.

Here again, the results are radically different. Not much changes in British Columbia or Alberta, but the division of the vote between the CA and the PCs gives the New Democrats three seats in Saskatchewan. In Ontario, the PCs would likely be more competitive but the division of the vote balloons the number of seats the Liberals can win (demonstrating how many of the actual races in the province were CPC-LPC) while only marginally increasing the NDP's haul. In Quebec, the New Democrats win a few more seats at the expense of the Conservatives, while the Liberals mostly take advantage in Atlantic Canada.

If we continue the alternate-history narrative from the last time I made these estimations in 2009, the result would have been the re-election of the Liberal-NDP coalition, giving them a majority instead of a minority with 49.5% of the vote (a gain of five points). But it would have been a changing of the guard, with the Liberals dropping 41 seats and the NDP picking up 77, most of them from the Bloc Québécois (which drops 52 seats). The Canadian Alliance and PCs would also increase their caucuses, by eight and seven seats, respectively. So, as in 2011, the only 'losing' parties would have been the Liberals and the Bloc - all the others increased their seats.

This scenario is rather unlikely, considering that with a divided right the Liberals would have likely won a majority in 2004 and minorities in 2006 and 2008. It is hard to imagine that after three elections like that the Canadian Alliance and Progressive Conservatives would have still resisted a merger. But it is not entirely implausible, neither for the past nor the future - at this stage it seems easier to imagine the Conservative Party splintering again (say, if a Red Tory wins the next leadership race) than the Liberals and NDP merging. There is at least precedent for the former, and none for the latter. Divisions on the right in Alberta, for example, show how there can still be plenty of animosity between the two factions within the federal organization. There is no scope for such a disintegration in the short term, particularly under Stephen Harper. But nothing lasts forever.
Posted by Éric at 9:59:00 AM