The quotation marks in the title of this post is no accident. There was only one publicly released national poll during the month of December, making it impossible to call the month's calculations an average. For that reason, I am not going to bother with a post detailing the month in polling, since I can instead just point you to the poll report from EKOS Research.

There was a federal Quebec poll conducted in December by CROP as well, which does make that province's estimation an average (33% LPC, 27% NDP, 22% BQ, 12% CPC). But it is still too little to spend any time on. So this post and the graph below has been uploaded to the site merely in order for future generations to know what happened in December 2013. 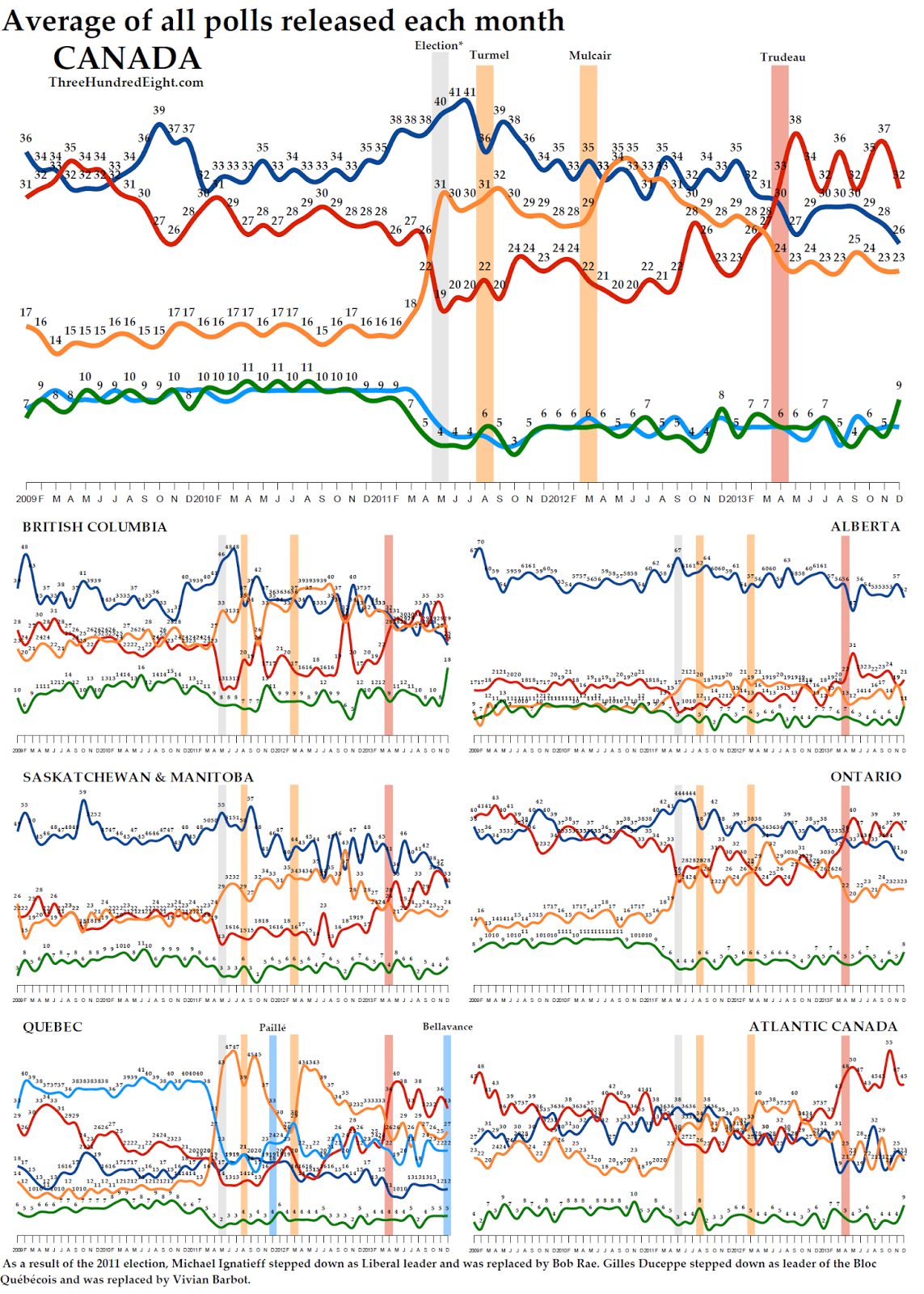 The EKOS poll does make the month look rather anomalous in some parts of the country. For example, it sinks the Conservatives to just 26% nationwide, their lowest on record, and shows big upticks in Green Party support in most regions. But apart from those exceptions, EKOS's numbers were not too unusual and do not make the line graph appear extraordinarily unwieldy. Hopefully things will fall in line in January.

There might be an element of poll fatigue at play, especially now that we are at the mid-point of the Conservative mandate and 2013 was a rough year for polls. Accordingly, I also suspect that the polling miss in Brandon-Souris, and the very negative press that resulted, may have encouraged a few pollsters to step outside for awhile. We saw a little bit of the same thing happen shortly after the election in British Columbia. That experience was so traumatic that it also apparently prompted one firm, Angus-Reid, to drop out of the political game entirely. We haven't heard from them with a poll on voting intentions anywhere since the B.C. election.

Over the last few years, January has been about as quiet as December so we could expect more silence. But because of the lack of polls released last month, I imagine that more than a few pollsters will come out with some new numbers soon. We haven't heard from some of the regulars since October. There are more than a few questions I'd like answered. Any consequences from the resignation of Daniel Paillé? Have any of the year-end interviews had an appreciable effect? Hopefully, we'll have some answers soon.
Posted by Éric at 9:31:00 AM