Liberals still lead in New Brunswick, and some news

The projection for the upcoming New Brunswick election, approaching fast on Monday, has been updated with the latest poll from Forum Research. The Liberals continue to lead, though the gap is narrowing. But before getting to that, a little news.

I'm excited to announce that I am joining the CBC News political team. I'll be writing for CBC.ca as well as appearing on television and the radio, covering polls and projections in the run-up to the 2015 federal election. It will be a lot of fun, and as the vote gets closer and closer we should have some great stuff for you.

My first article for the CBC, looking at the lay of the land as the House returns, can be found here.

It will be business as usual for the time-being on ThreeHundredEight.com. I'll be posting links to my articles and appearances here, in addition to keeping you up-to-date on the latest polls, as always.

I'd also like to thank The Globe and Mail and The Huffington Post Canada for the great opportunity they gave me to write for them since 2010 and 2011, respectively.

It has been a quiet campaign on the polling front. Forum's poll, conducted on September 11, is the first set of numbers we've seen since the Corporate Research Associates poll that left the field on August 31.

Of note is that the maximum and minimum ranges now overlap between the Liberals and Tories, meaning a PC victory is now plausible. It requires a big miss by the polls, however. 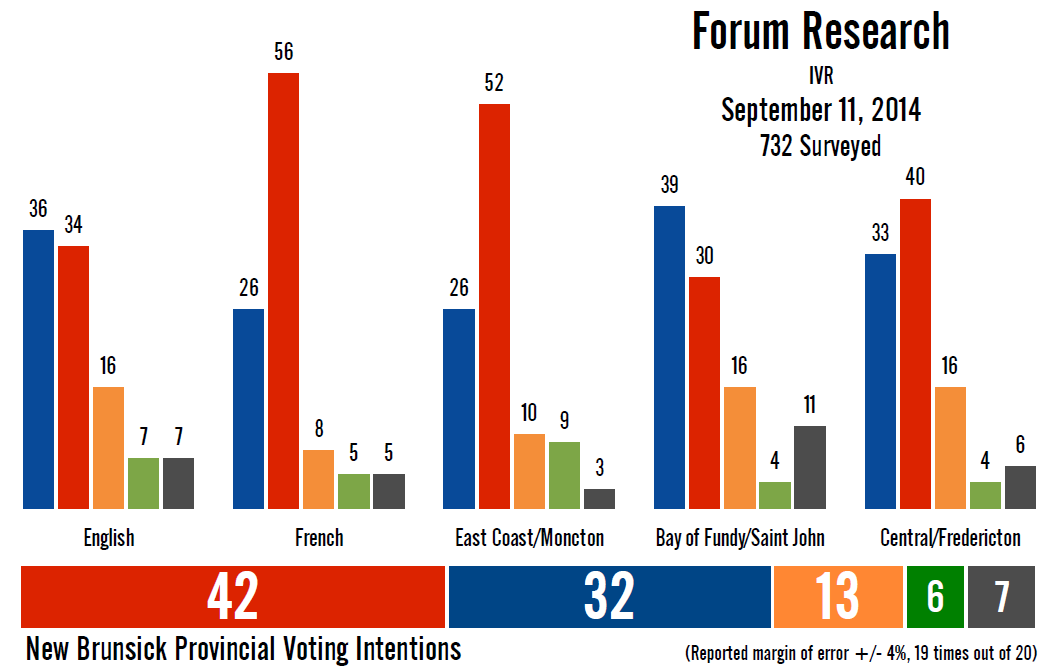 The Forum poll showed the Liberals still leading with 42%, down four points from their previous survey of August 25. The PCs were up just one point to 32%, while the NDP was down two points to 13% and the Greens one point to 6%.

This poll pegged support for other parties to be 7%, a gain of six points and the only shift that is outside the margin of error.

There is only one other party on the ballot, that being the People's Alliance of New Brunswick (PANB). There are a smattering of independents as well. Has the PANB made significant gains?

With a PANB candidate in just 37% of New Brunswick's 49 ridings, many voters may not have yet realized that they will not have the option to vote for the PANB. That alone, then, could drop that 7% support to just 2.6%, or 3.6% if we make allowance for the 25 ridings that have either a PANB or independent candidate on the ballot.

This is one reason why the projection shows such low support for other parties. My methodology for estimating the support of smaller parties is to focus on how they performed in the last election and the number of candidates running in the current one. This method has been very successful in the past. The PANB does not have enough candidates to net 6% or 7% of the vote. That would require them to average about 19% in every riding. In 2010, the party averaged 4.6% per riding, or 3.4% if we exclude leader Kris Austin's notable performance.

Perhaps the debate, in which Austin took part, has boosted his party considerably. But even that looks unlikely. Support for other parties stood at 7% among anglophones, but also 5% among francophones. How plausible is it that the PANB, a party that has a reputation (deserved or otherwise) of lacking respect for francophones, and which is led by a leader who does not speak French and so could not participate in the French-language debate, is polling almost as strongly among francophones as it is among anglophones?

The minimum/maximum range for "Others" in the projection should suffice to capture the PANB's support.

Also of interest in this poll were the results for the three main leaders. Brian Gallant, whose party is ahead by a wide margin, is not polling as well as he was at the end of August.

David Alward's numbers held steady, at 26% approval and 63% disapproval. Those are not enviable numbers by any stretch, but they are no longer so horrible compared to Gallant's.

Dominic Cardy of the NDP is doing better. His approval rating was up to 38%, but more importantly his disapproval rating was down five points to 24%. And for all the noise about the direction that Cardy is taking the NDP, just 5% of NDP voters said they disapproved of him.

But liking Cardy is not the same as voting for him, as the party's drop in support attests. And when respondents were asked how they rated the leaders on specific issues, Cardy was still behind the others.

On who would best handle the budget, Gallant edged out Alward with 27% to 26%, with Cardy at 18%. On who could best bring jobs and growth to the province, it was Gallant at 31% to Alward with 28% and Cardy at 12%. Only on being able to cut waste was Cardy competitive.

Though Gallant was more comfortably ahead on ethics and vision, that he was only a few points up on Alward on economic questions should be of some concern for the party. Alward may be too unpopular to make major inroads, but if Cardy can eat into Gallant's support the race could get a lot closer.
Posted by Éric at 10:49:00 AM