Breaking down the Quebec vote

Ever since the controversial Mario Beaulieu became its leader in June, the Bloc Québécois has been drifting further into irrelevance. What kind of opportunity has this opened up for the other parties in Quebec?

But let's go over the data quickly, first paying attention to the new Angus Reid Global poll released this morning.  Nationwide, it puts the Liberals ahead of the Conservatives by six points, finally putting Angus Reid in line with the consensus of other pollsters. I briefly analysed the poll here.

The Quebec results are of particular interest, as they break the deadlock between Léger and CROP. Léger gave the Liberals a 10-point lead in the province, while CROP gave the NDP the edge by two points. Angus Reid comes down on Léger's side, putting the Liberals ahead by six points. 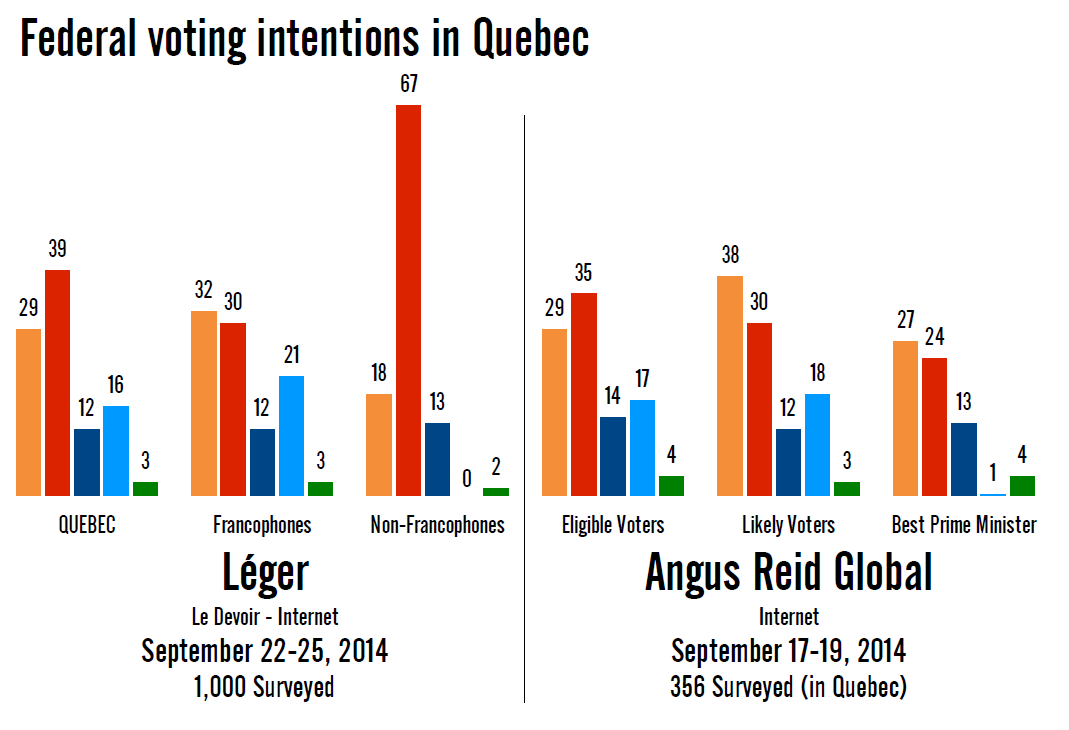 As you can see, they tally among eligible voters for Angus Reid is quite close to Léger's. On the other hand, Angus Reid's estimation of likely voters puts it closer to CROP. But we saw in the Ontario election how likely voter models can come up short and are still in an experimental phase.

Angus Reid was also in agreement with CROP and Léger on preferences for prime minister: Thomas Mulcair was ahead of Justin Trudeau in all three polls.

Though CROP may be a little more bullish on the NDP in Quebec than other polls would consider appropriate, the poll does have some value for its regional breakdowns. 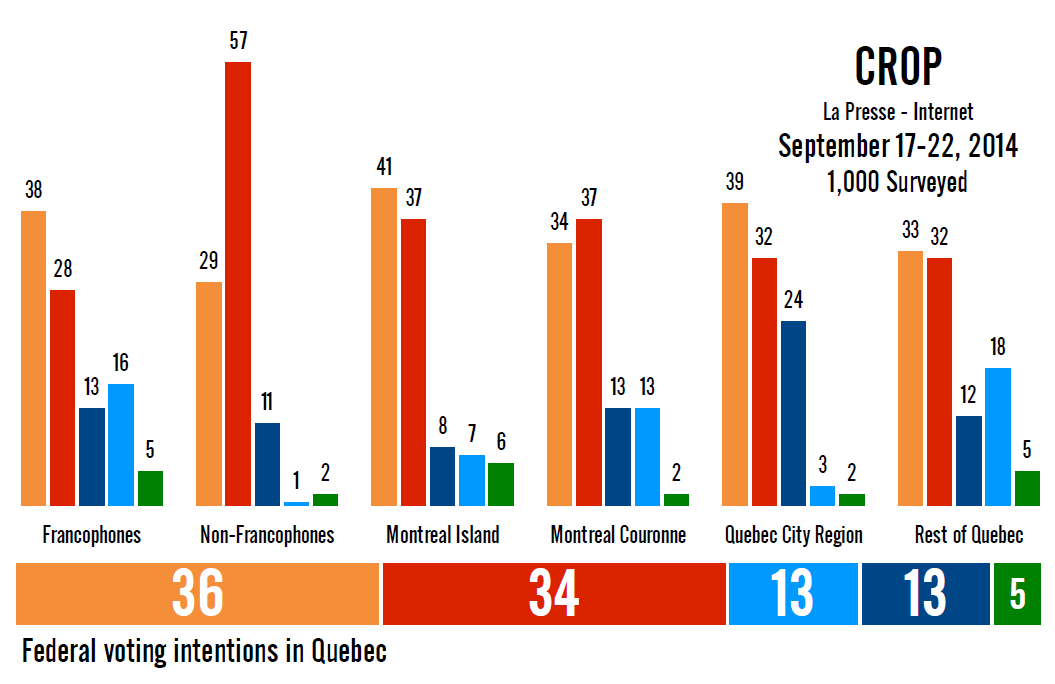 If we consider the NDP a little too high, we can still derive a lot of information from the CROP survey. It would still suggest an NDP lead among francophones, as Léger has it (albeit by a narrow margin). It would still put the NDP and Liberals in a close race throughout the province, though with the Liberals likely having the edge in each region instead of the NDP.

Otherwise, everything looks as it should be. The Bloc is stronger in the Montreal suburbs than in Montreal itself, and is polling best in the regions of the province. The 3% score in Quebec City is probably too low, but CROP has been putting the Bloc in single-digits in the capital for three consecutive polls now. The Parti Québécois is also polling badly in the region, where the Conservatives put up their best numbers.

Quebec will undoubtedly be the most interesting battleground of 2015, though its importance will still take a backseat to Ontario. But much is riding on what happens in Quebec. While the identity of the government will not be decided here (it won't be an election where either the NDP or Liberals would be in the running for government - it will have to be one or the other vs. the Conservatives), the province could decide the kind of government that is formed: majority or minority. And in the latter case, the number of seats it gives to either the Liberals or NDP could indeed make the difference between a Conservative (though likely short-lived) minority or one formed by either of the opposition parties. When was the last time the vote in Quebec will have mattered so much in a federal election?
Posted by Éric at 9:13:00 AM