The polls are starting to converge in the Toronto mayoral race, as the Toronto Star published the latest numbers from Forum Research this morning. The results of the poll are virtually identical to the last set of numbers that were released by Nanos Research. And that means John Tory's comfortable lead over Rob Ford and Olivia Chow looks confirmed. 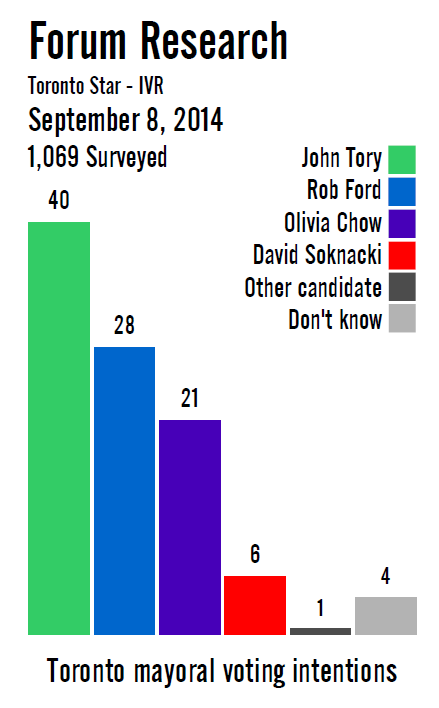 The poll, conducted the day before David Soknacki's withdrawal from the race, gave Tory 40% support among all respondents, a gain of six points over Forum's previous poll of August 25-26. Ford was down three points to 28%, while Chow was down two points to 21%. Soknacki scored 6% in this his final poll of the campaign.

This is the strongest result that Tory has managed in any Forum poll, and the lowest number we have seen from Chow. But for Ford, who appeared to be potentially making a comeback in Forum's last poll, this is just a return to the numbers he was putting up between the end of June and early August. In the end, his surge was indeed a fluke.

One thing noted by the Star was Chow's drop of 10 points in Scarborough, where she has just 9% support. That seems like an unusual and unlikely result, but at the same time she gained 11 points in Etobicoke-York, where she is now apparently almost as competitive as she is downtown. So the two oddities probably cancel each other out.

If we iron out the Nanos poll from early July, the trends have been pretty clear and consistent. Chow has been dropping across the board since mid-June, and it has been Tory who has benefited. Ford's numbers appear to have rebounded slightly (he seems more likely to end up closer to 30% than the 20% that seemed probable in the spring) but it is Tory who has taken command of the race.

Will Soknacki's departure change much? He wasn't taking many votes off the table. At 6% in this poll, he was polling as high as he ever has.

Forum did ask how people would vote if Soknacki was off the ballot. The overall results were little different, with Tory being boosted to 41%, Ford to 30%, and Chow to 24%, with 5% either undecided or casting their vote for another candidate.

If we remove the undecideds, we see that Chow may be the candidate who could benefit the most. Of the six points that become available, she would get three of them, boosting her to 25% support. Ford gets two of those points, and the last goes to minor candidates.

It will not transform the race, but it could give Chow a much-needed morale boost. If she does manage to pick up three of the available six points, the next poll will cast her as a candidate on the upswing. If Soknacki did not withdraw, there would have been the possibility that Chow would have dropped further, taking a lot of wind out of her campaign's sails. It gives her more time.

Perhaps Soknacki pulled out prematurely. Yes, he was still at just 6%. But his approval and recognition ratings jumped remarkably in this last poll. From an approval rating of 35% among the entire sample at the end of August, Soknacki jumped to 47%, with those not recognizing him falling to just 19%. That was the biggest move of any of the candidates.

Tory's approval rating is very high, and has been for some time. It puts him in a good position since he seems unlikely to leak support to other candidates. For the first time, this poll also put Tory ahead of Ford on the question of who could best handle the city's budget.

So Tory is the favourite as we enter this last stage of the campaign. Is it a slam dunk? Not at all. This municipal campaign is very long by Canadian standards. With almost seven weeks to go before the vote, a normal provincial or federal campaign would not have even started yet. That might lead us to believe that abrupt and significant change could still be in store. But longer campaigns mean opinions can solidify earlier. To win, Tory merely needs to avoid error. Ford likely cannot grow out of his base. That leaves Chow to make a move, and time is slowly running out.
Posted by Éric at 9:43:00 AM