The final polls have suggested that a tightening of the race has occurred in the final week of the campaign, and the very last poll conducted yesterday indicates that it could very well be a tie. We will see tonight whether that is the case, but because of the uncertainty in the polls the result is, right now, a toss-up.

The projection model considers it almost equally likely that the Liberals or the Progressive Conservatives will win tonight's election.

But this is literally as close as it gets. Three seats are projected to go to the PCs with 50% confidence - in other words, a true coin flip. If all of those seats instead go to the Liberals, then the seat count would be reversed, with 26 going to the Liberals and 23 to the PCs. The model is giving the PCs the edge in seats by a collective margin of two percentage points across those three seats.

This might be surprising, considering that the Liberals have led in the polls for over a year - and by nine points in the most recent survey from the Corporate Research Associates. But it is the final poll of the campaign that has injected a large dose of uncertainty into today's result. More on that later.

The projection does not consider a seat for the New Democrats to be likely. With 11.7% support, or between 8.3% and 14.7%, the party is only marginally above where it was on election night in 2010.

Neither are the Greens or the People's Alliance expected to win any seats. The Greens end the campaign projected to take between 4.3% and 7.5%, or 6% more precisely, a relatively good result for them.

Really, the entire night is an exercise in surprise. But if we extend the ranges to the minimum and maximum levels, encompassing 95% of all likely outcomes, we still see a lot of overlap between the Liberals (7-36 seats) and PCs (12-42 seats).

The NDP's higher range extends to two seats, so the potential for a minority government exists if the seat count is otherwise as close between the Liberals and Tories as the projection currently has it. I would not count out the possibility of an NDP seat, as the party has made major strides forward compared to 2010, when it was almost an afterthought. Though the polling numbers don't suggest the party has made significant inroads, it does seem like the party has done good work to legitimize itself a great deal.

There have been precious few polls in this campaign. In all, just five were published. In Nova Scotia, a similarly sized province, last fall, there had been 27 polls published (three rolling polls).

In the early stages of the campaign, it did not seem to matter too much. The Liberals were polling around 45%, the PCs around 31%, and the NDP around 15%. There was no major variation that couldn't be explained by the margin of error. But the last two polls have changed things considerably. 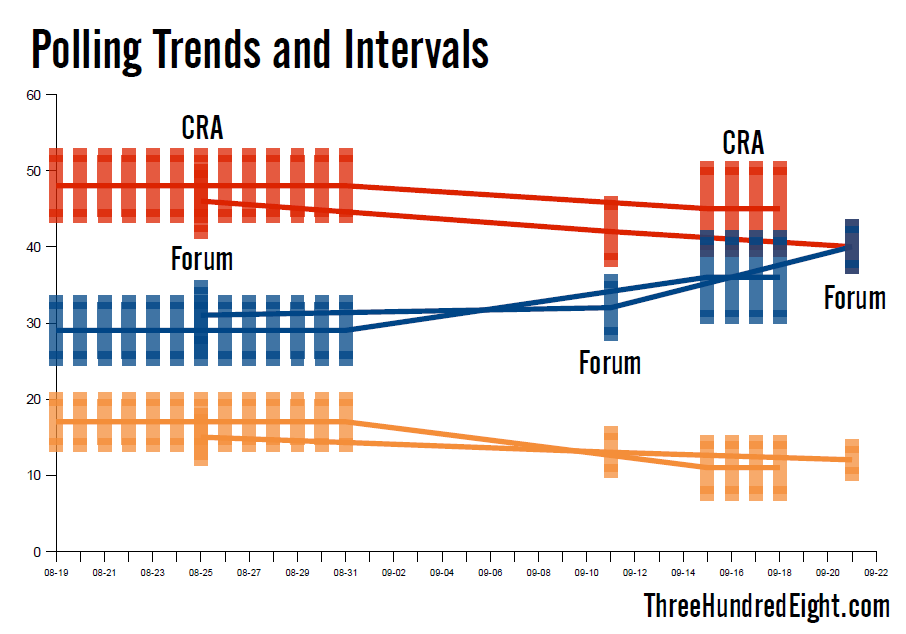 The CRA poll of September 15-18 did not show major Liberal slippage, but did suggest that the Tories were making gains with the NDP faltering. From 29%, the PCs were then at 36%. And from 17%, the NDP was down to 11%. Was there something going on?

The poll conducted and published yesterday by Forum seems to suggest there is change afoot. Forum had the Liberals with a 10-point lead on September 11,  but yesterday Forum reported the lead to have vanished: a tie at 40% apiece, with the NDP slipping again to just 12%.

The trends, as you can see above, have pointed at PC gains. (The chart shows the error bars taking into account the margin of error, the trends for CRA and Forum, and the days each of them were in the field.) The Liberals have been slowly dropping - the NDP as well - while the PCs have been moving forward. So this could be for real.

Forum's record in election-eve polling is a generally decent one. In Alberta in 2012, its election eve poll was the only one that suggested Wildrose might not win easily. In Ontario earlier this year, Forum had the Liberals winning a majority (but the Tories too high). They were close to the mark in Nova Scotia in 2013, though so were other polls in the field.

It makes it hard to discount the poll, particularly since CRA was hinting at gains. And this poll's sample of decided voters is almost four times as large: 1,269.

How the leaders fared

It is a rare campaign where all three major party leaders have negative approval ratings, but that has been the case in New Brunswick.

Gallant has not had a successful campaign, at least according to the polls. He was a +1 in Forum's first poll, with one-third of New Brunswickers not having an opinion of him (34% approval, 33% disapproval). Yesterday, he was at -10, with an approval rating of 36% and a disapproval rating of 46%. His 'don't knows' dropped by 15 points, but 87% of those people who made up their minds about Gallant went over to the disapproval side. That does not bode well for tonight. 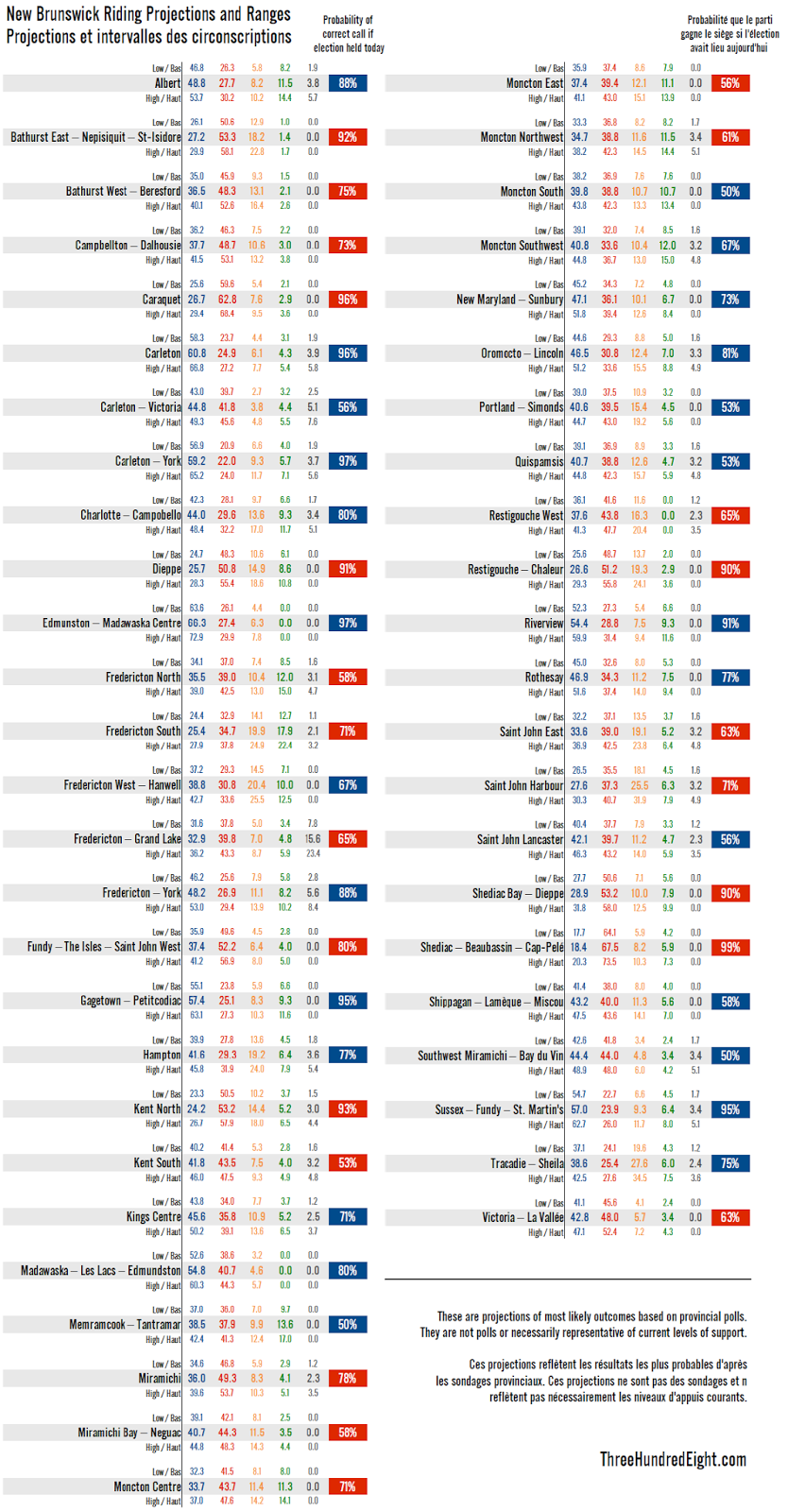 Alward should have no trouble being elected in his riding of Carleton. The model gives it to him with 96% confidence, with between 58% and 67% support vs. 24% to 27% for the Liberal candidate.

Gallant, too, should be elected without issue in Shediac Bay-Dieppe. It is projected to go to him with 90% confidence, with between 51% and 58% of the vote to 28% to 32% for the PC candidate.

The model does not consider Dominic Cardy a likely winner in Fredericton West-Hanwell, which is considered to be a PC seat with 67% confidence. The model puts Cardy in third with between 15% and 26% of the vote, against 37% to 43% for the PC candidate. But I would consider this riding one that could go over to the NDP nevertheless.

David Coon is projected to take between 13% and 22% of the vote in Fredericton South, potentially placing as high as second. As Coon was in the leaders' debate for the Green Party, he could even outperform this tally.

This election was supposed to be an easy one. In the year before the vote, the Liberals were enjoying a lead of almost 20 points, and that lead seemed to be holding through to the end of August. The race tightened one the campaign got going, as is usually the case, but the last set of polls has thrown all expectations to the wind. And it shows why at least one more poll would have been helpful to give us a clue of whether CRA or Forum is on the mark.

Consider two scenarios. The first assumes that CRA was accurate and that voting intentions remained static over the last few days. Forum's final poll, then, was perhaps a victim of the margin of error. My model, based solely on the CRA poll, would give the Liberals 31 seats and the PCs just 18 (or a range of 23-35 for the Liberals and 14-26 for the PCs). In other words, a relatively certain result.

The second scenario assumes that Forum is right, and that CRA was registering the first signs of PC gains. The model then gives the PCs 28 seats to 21 for the Liberals (or a range of 21-35 for the Tories and 14-28 for the Liberals). A closer result, but more clearly a PC victory than the current projection.

Instead, we are somewhere in between in the worst of worlds. Considering the nine ridings projected with 56% confidence or less, a gust of wind could easily make the outcome change from a 26 to 23 split in favour of the Tories to a 30 to 19 split in favour of the Liberals. A gust of wind in the other direction could instead transform the close result into a comfortable PC victory of 28 seats to 21. It makes for an exciting night, but a terribly nerve-wracking one for me - and more importantly the candidates with their futures at stake tonight.
Posted by Éric at 9:05:00 AM