In ThreeHundredEight.com's first projection for the provincial election scheduled on September 22, 2014 in New Brunswick, the Liberals under Brian Gallant have a commanding lead and are in a position to win a comfortable majority government.

With these support levels, the Liberals would likely win between 32 and 41 seats and form a majority government (25 seats are required). The PCs would win between eight and 15 and form the Official Opposition, while the NDP would take between zero and four seats.

Note that even at the extreme low, the Liberals still take 24 seats. Virtually every scenario gives them victory, and with a majority government.

Before getting into the details of the projection model for this election, let's take a brief look at the two polls that have gotten it off the ground. 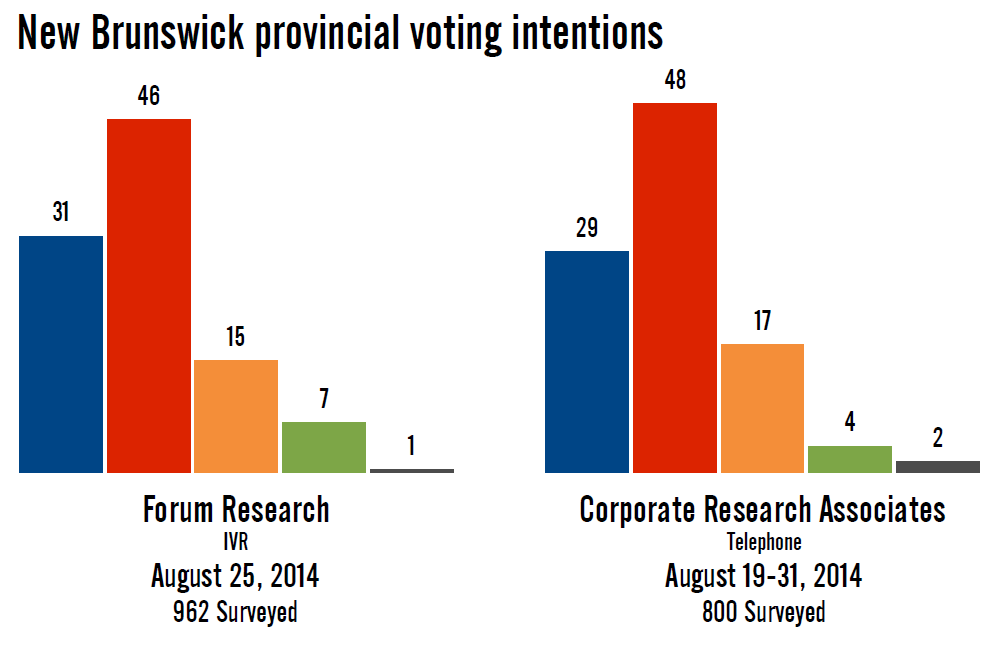 The first poll, from Forum Research, was unexpected. It was published to the company's website, and is the first foray into New Brunswick that Forum has conducted.

The poll found the Liberals to be leading with 46%, followed by the PCs at 31%, the NDP at 15%, and the Greens at 7%. In that it differed very little from the last public poll at the time, conducted by the Corporate Research Associates in May, it was rather unremarkable.

It did contain some approval ratings, however, which have been lacking for New Brunswick's political scene. PC leader David Alward's were the lowest, at 27% approval to 60% disapproval. Gallant and NDP leader Dominic Cardy were tied at 34% approval, though Gallant had a higher disapproval rating (33% to 29%). Both leaders are still relatively unknown, with 33% not having an opinion of Gallant and 37% saying the same of Cardy. For a third-party leader without a seat in the legislature, that is not bad for Cardy. But Gallant's numbers are a little high for the apparently-incoming premier.

CRA found very similar numbers to Forum in the poll they published today. The Liberals had 48%, with the PCs at 29% and the NDP at 17%. For the Liberals, that was a drop of five points since May but the party has been wobbling back and forth for a year. The PCs have been steady as well.

Of the entire sample, 14% were undecided and, in total, 25% were either undecided or did not give an answer to the voting intentions question. While that is a big drop from the last poll, this is due to CRA not including leaners in their polls outside of an election campaign.

Gallant topped the list on who would make the best premier with 35%, followed by Alward at 22% and Cardy at 11%. Satisfaction with Alward's government was just 35%. He can't win an election with that number.

The model for New Brunswick uses the same template that has been employed in the last elections in Nova Scotia, Ontario, and Quebec. The basic methodology has not changed at all. But there are a few other differences.

For one, the model is not designed to include regional data. Both the Forum and CRA polls had no regional breakdowns, and it is unlikely that there will be quality regional data available throughout the campaign. For that reason, the model is just looking at the province-wide numbers. If support increases and decreases uniformly, this will pose no problems. If support jumps for one party in one region but not another, there will likely be more mistakes. This is unavoidable, particularly in a small province like New Brunswick. I will endeavour to include any regional data that becomes available.

Another quirk worth mentioning is the riding of Tracadie-Sheila, the only riding currently projected to be won by the NDP. In truth, it probably will not be won by the NDP. The riding is a strong one in the projection because it was previously the riding of Roger Duguay, the party's leader in 2010. He took 34% of the vote in that election on the riding's current boundaries, which was by far the party's best performance in New Brunswick. But Duguay is not running there again, and is no longer leader. Worse, prior to 2010 the riding had no particular history of voting NDP, and will probably return to that pattern in 2014.

So why does the model still show the riding as leaning NDP? The simple answer is that the model is based on past performances, and anomalies like this one can skew things. There is a mechanism in the model, which I am including for the first time in this election, which takes into account a situation like this one, where a leader is no longer running in a particular riding. But even with that mechanism, based on how the vote dropped in other ridings where leaders did not run again, Tracadie-Sheila is still projected to go NDP. But instead of a 20-point edge, the NDP is just nine points up. It will probably be a miss by the model. I could stick my thumbs in to get a more plausible result, but that would turn the model into an educated guess.

That is not to say that projecting one seat for the NDP is wrong. The party is in a very close race in a number of ridings, so it is very plausible that the NDP could win one of them. In the end, their likely range gives them as many as four seats, so awarding them one is not at all unreasonable.

Lastly, my thanks go to Kyle H. of the Blunt Objects blog for providing me with the transposed results of the 2010 election onto the new boundaries being used in this provincial campaign.
Posted by Éric at 4:20:00 PM