The apple does not fall far from the tree. So it goes in Atlantic Canada, where both the federal and provincial Liberal parties are leading by significant margins throughout the region. 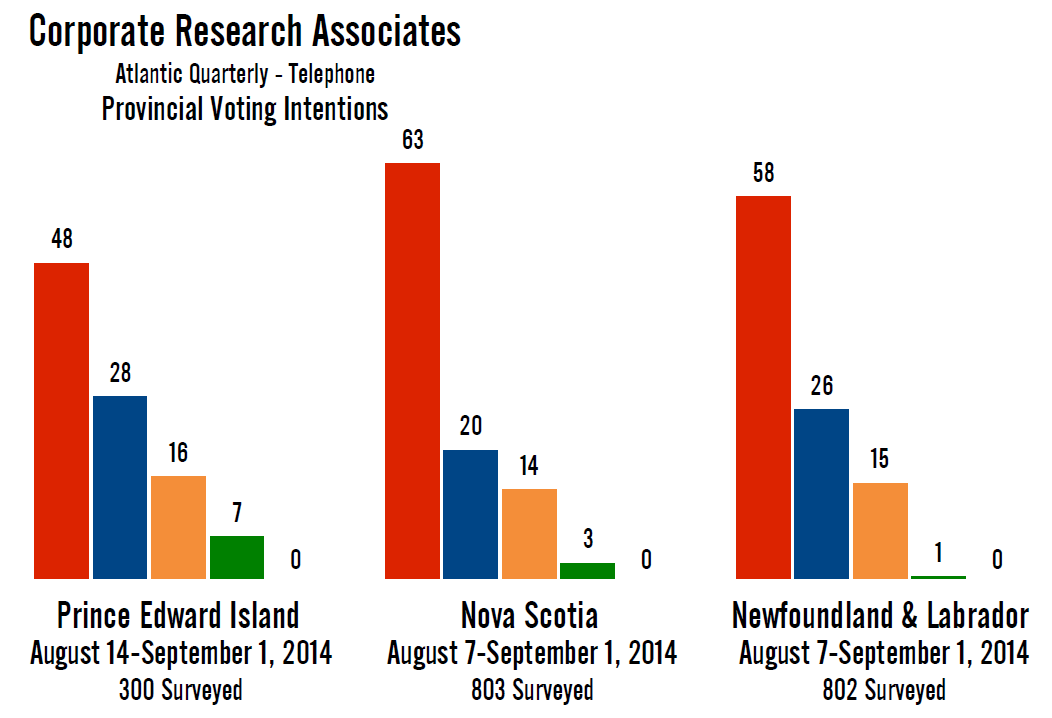 The Corporate Research Associates released its Atlantic Quarterly polling results yesterday, showing the Liberals in good position in every province, with the Progressive Conservatives well behind in second and the NDP slipping further into third.

In Prince Edward Island, the Liberals led with 48%, followed by the PCs at 28%, the NDP at 16%, and the Greens at 7%. Though the Liberals and NDP were down by five points each compared to CRA's last poll in May, and the PCs were up five, the shifts were within the margins of error. Of the total sample, 25% were undecided.

This is the lowest the Liberals have registered in PEI since August 2013. For the NDP, it is the worst since February 2012. In fact, they had double the support this time last year. Meanwhile, the PCs have put up their best result since December 2012 and, at 14%, Steven Myers has managed his highest score on who would make the best premier since he took over the party.

Robert Ghiz of the Liberals was still well in front, however, with 36%. Mike Redmond of the NDP was second with 18%. He is polling better than his party.

Satisfaction with the Ghiz government was down slightly, to 52%. Dissatisfaction was unchanged at 41%.

The Liberals are continuing to dominate in Nova Scotia, with 63% support. That is their highest in recent memory, while at 14% the NDP has fallen to its lowest level of support. The PCs, at 20%, have been holding steady. In total, 28% of the sample was undecided.

Stephen McNeil was the choice for premier of 48% of respondents, followed by Jamie Baillie at 19% (his best since the start of the 2013 campaign) and 9% for Maureen MacDonald of the NDP.

61% of Nova Scotians said they were satisfied with the government, with just 24% dissatisfied.

And in Newfoundland and Labrador, after New Brunswick (we looked at the CRA poll for that province on Tuesday) the next province to go to the polls, the Liberals were up to 58%, their highest level of support in years. The PCs were down to 26%, their lowest since August 2013, while the NDP was steady at 15%. Total undecideds numbered 31%.

Dwight Ball remains the favourite for premier, with 40% to 28% for Tom Marshall of the PCs and 13% for Lorraine Michael of the NDP.

Satisfaction with the government was the highest in the region at 62%, while dissatisfaction was just 25%. In the province where the governing party is polling lower than anywhere else in Atlantic Canada, it is odd that satisfaction with the government is so high. Are Newfoundlanders and Labradorians simply done with the PCs, no matter what they do? That could be one interpretation. The other is that the Liberals could take a hit during an election campaign when voters have to decide whether to make a change. The satisfaction numbers (note that they were only 31% a year ago) might point to that, but the Liberals have been winning by-election after by-election in the province.

The boost in support for the Liberals in Atlantic Canada does raise a chicken-or-the-egg question. Are the provincial Liberals popular again thanks to the boost Justin Trudeau has given the federal party, or is the federal party doing well because of the work of its provincial cousins? 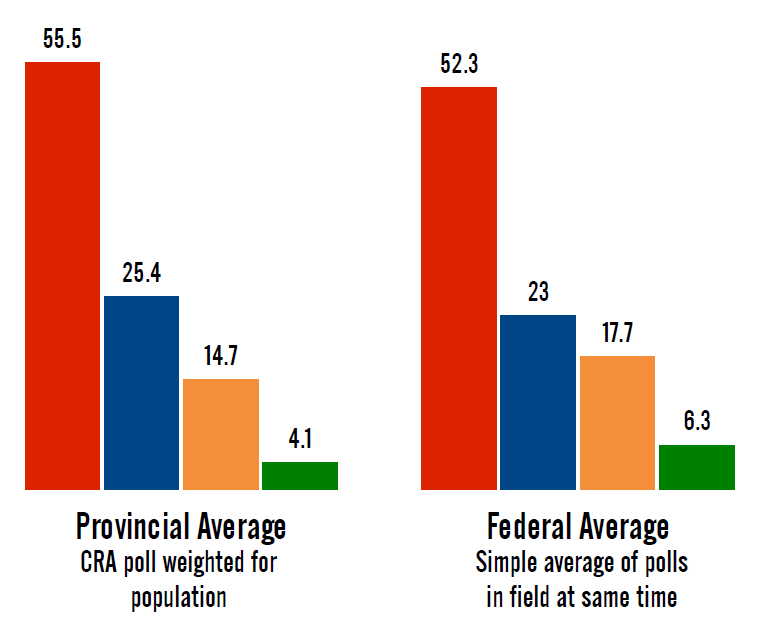 A complete coincidence can probably ruled out. Weighted for population, the CRA poll averages out to 55.5% support for Liberal parties throughout the region, with the PCs at 25.4%, the NDP at 14.7%, and the Greens at 4.1%.

By comparison, the federal polls conducted over the same time have averaged 52.3% for the Liberals, 23% for the Conservatives, 17.7% for the NDP, and 6.3% for the Greens. That is quite close.

Which brings up another question: while Trudeau has probably played a role in helping boost Liberal fortunes throughout the region, what effect have Stephen Harper and Thomas Mulcair had?

Is the unpopularity of the federal Conservatives rubbing off on the provincial Tories? It could be a factor, though support for the PCs in Nova Scotia has been low for some time. The PCs in PEI have had internal turmoil and the Tories in Newfoundland and Labrador have been sinking ever since Danny Williams left. The abrupt drop in support for the first-term New Brunswick Tories is a little more difficult to explain.

And what about the NDP? The federal party did lead throughout the region in 2012, relinquishing that lead by early 2013. Similarly, the provincial wings of the NDP saw boosts in support in 2012 but also into 2013, particularly in Newfoundland and Labrador. Internal turmoil, again, might be the root cause of the party's slip there, and the NDP was in government in Nova Scotia, which gave it a different kind of profile.

It seems likely that Trudeau has given the Liberals new momentum that has carried over to the provincial side, helped in part by effective new leaders in New Brunswick and Newfoundland and Labrador. The PCs have certainly not been helped by their federal cousins, but their recent slump looks largely of their own making. The NDP was probably boosted by the party's surge in 2011 and 2012, which lingered at the provincial level into 2013, but since then domestic affairs and the drift of the federal party have chipped away at what could have been a breakthrough.

Outside of Atlantic Canada, only Ontario has the same sort of three-party system (plus the Greens) that exists at the federal level, and it is remarkable how closely support is being tracked at both levels of government. It certainly bodes well for the federal Liberals, who have just seen a big provincial victory in Nova Scotia and are on track for other ones in New Brunswick this year and Newfoundland and Labrador next year. A federal near-sweep of the region seems like one of the safest bets to make for 2015.
Posted by Éric at 9:23:00 AM