The surge in Liberal support that was recorded by the polls in July was sustained into August, as four pollsters interviewing 5,424 Canadians were in the field last month. But the Conservative slump that was also recorded in July appears to have been erased, as the party is back polling to where it was in June. 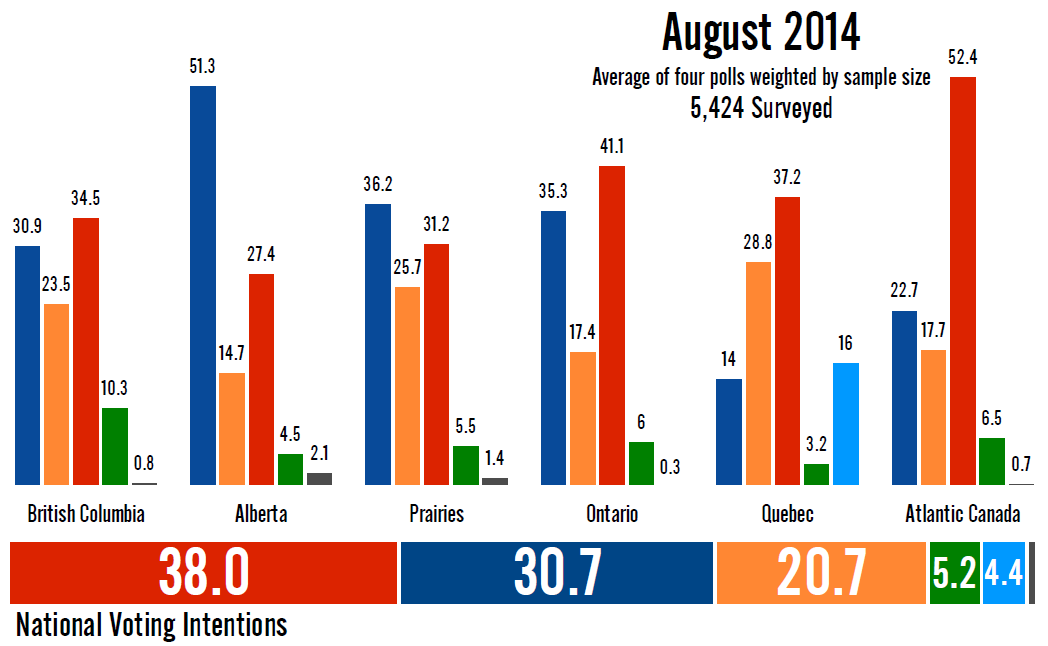 The Liberals led in the polls in August for the 17th consecutive month, with 38% support. That was down slightly from 38.7% in July, but together July-August was the best two-month period the Liberals have managed since before 2009.

The Conservatives were up 2.6 points to 30.7% in August, while the New Democrats were down one point to 20.7%. That is their lowest level of support since March 2011, before their breakthrough in the subsequent election campaign.

In Ontario, the Liberals dropped 3.4 points to 41.1%. But here again, this is their best two-month period since before 2009. The Conservative wobble that has been in place since the end of 2013 continued, as the party rebounded 4.4 points to 35.3%. The NDP was down 0.3 points to 17.4%, their lowest level of support in Ontario since February 2011. With the exception of a small uptick in June, the NDP has fallen in five consecutive months in the province. The Greens were up, however, by 0.3 points to 6%.

The Liberals also led in Quebec with 37.2%, a gain of 1.8 points and their highest level of support since January 2014. They have made gains in each of the last three months. The NDP was up 0.9 points to 28.8%, the party's best result in the country, while the Bloc Québécois was down 2.4 points to 16%. That is the lowest the Bloc has managed since before 2009, and most likely since before the 1993 election. The Conservatives were down 0.4 points to 14%, where they have been in five of the last six months, and the Greens were up 0.3 points to 3.2%. 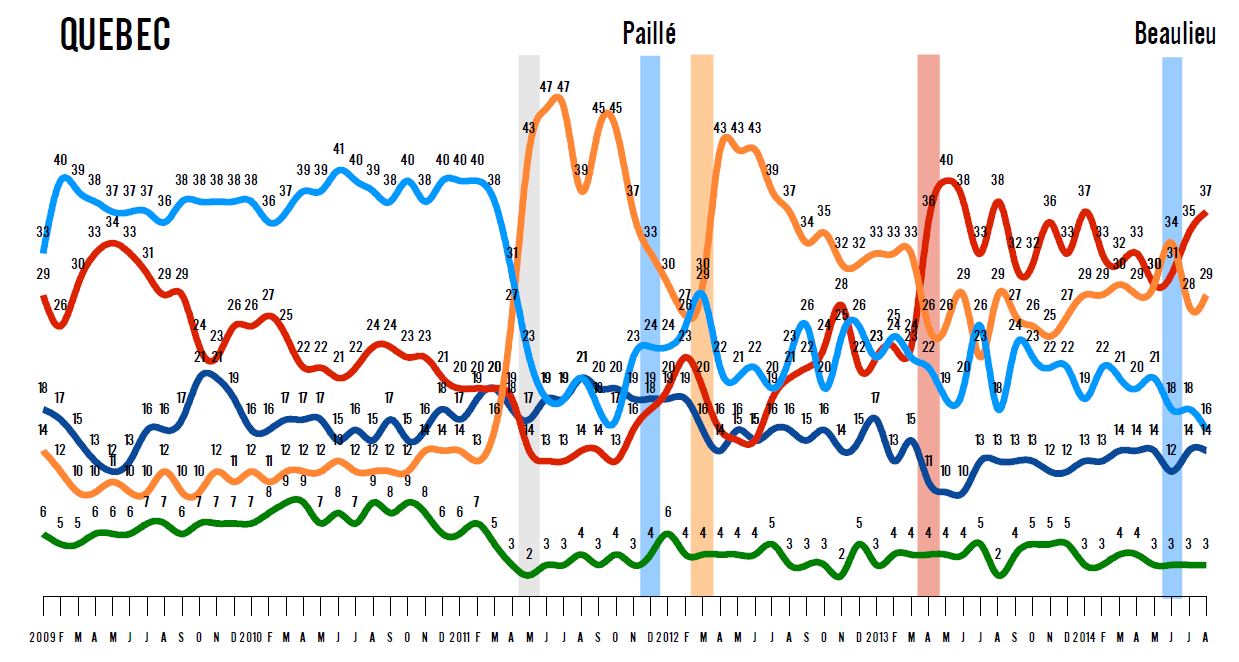 Though it may not be fair to lay the blame completely at Mario Beaulieu's feet (the Bloc has been dropping since April, when the Parti Québécois was dealt a stinging defeat), it is hard not to find a correlation between the departure of two MPs and the departure of a whole swathe of voters. At the very least, Beaulieu accelerated the Bloc's slide.

So far, though, the NDP has not been the prime beneficiaries, as they were from the Bloc's original fall in 2011. Instead, the Liberals have taken advantage. Before Beaulieu came along, the Bloc was at 21% support in Quebec. It has since decreased by five points. The Liberals have increased their support by seven points since then, while the NDP has dropped by one. Of course, voters can move all along the line of scrimmage (Bloc supporters moving to the NDP, replacing NDP voters who went to the Liberals, etc.) but the end result of the shifts has been a significant improvement in the Liberals' position in Quebec.

The party is also well-positioned in Atlantic Canada, as it has registered majority support since throughout 2014. The Liberals were up 1.9 points in August to lead with 52.4%, the highest support any party has in any region in the country. The Conservatives were up 1.8 points to 22.7%, while the NDP was down 5.8 points to 17.7%. The Greens were up 2.8 points to 6.5%.

With these levels of support, the Liberals would likely win around 147 seats. That is a drop of 12 seats since July's projection, and 22 short of a majority.

The Conservatives were up 19 seats to 120, while the NDP was down six seats to 68. The Greens would likely win two seats (unchanged) while the Bloc could hold onto one (down one).

The Liberals did make gains in Quebec (two seats) and British Columbia (one seat), but were down one seat apiece in Alberta and Atlantic Canada, two in the Prairies, and 11 in Ontario.

The Conservatives were up 12 seats in Ontario, four in British Columbia, and one each in Alberta, the Prairies, and Atlantic Canada.

The New Democrats were down one seat in both Ontario and Quebec, and five in B.C., but were up one in the Prairies.

As the spring turned into the summer, it appeared that the Liberals were losing steam. From 36% and an eight-point lead in January, the party had fallen to 33% and a two-point edge in June. But the last two months have put the Liberals back in front with support they have not seen since Justin Trudeau's honeymoon just after his leadership victory.

While it puts the pressure on the Conservatives to regain that lost ground, it also puts the spotlight on the NDP. The party that forms the Official Opposition is heading towards the kind of numbers it put up when it was just the 'conscience of Parliament'. That needs to be reversed, and soon, if Thomas Mulcair wants a shot at 24 Sussex.
Posted by Éric at 10:06:00 AM