It was looking dry for a little while, but in the end three national and two Quebec federal polls were conducted during the month of August, interviewing some 6,000 Canadians. The results show that the Liberals have re-gained a comfortable lead after an anomalous July. 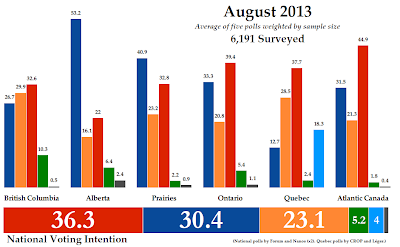 Last month was anomalous in that only two polls were conducted, making it difficult to measure the trends. And August itself was still relatively sparse, so I'll go over the averages briefly.

The Liberals led with an average of 36.3% support in August, up 3.9 points from July and their second-best monthly score since at least the 2008 federal election. The Conservatives were up 0.9 points from July to 30.4%, still keeping their current level of support below anything that has been recorded since, again, at least the 2008 election. The New Democrats, who have been stagnant since April, were up 0.3 points to 23.1%.

The Greens were down 1.3 points to 5.2%, while the Bloc Québécois was down 2.6 points to 4%. An average of 1.1% of Canadians said they would vote for another party.

If we compare the polls from Nanos and Forum to the last time these two firms were in the field (doubling Nanos, since they were in the field twice in August), we see that the parties have hardly budged since June.

The Liberals have gained 0.8 points in polling from Forum and Nanos since June, while the Tories were up 0.6 points and the NDP was down 0.3 points. Hardly anything to get worked up about.

Regionally, the most interesting result comes in British Columbia. There, the Liberals have managed their best result in at least 4.5 years, while the Conservatives have scored their lowest in that period of time (32.6% and 26.7%, respectively). The Liberals were also leading in Ontario, Quebec, and Atlantic Canada with upticks across the board (except Alberta).

The Liberals have re-taken the advantage in the seat count, and would likely win 134 seats with these numbers. That is up 17 from July, when they had placed second (yet first in the polls). The Conservatives were down 10 seats to 125, while the New Democrats were up 25 seats to 75 and the Bloc Québécois was down 32 seats to only two. The Greens were unchanged at two seats.

Quebec is obviously the big change, as the Bloc fell from 26% and second place to 18.3% and a distant third. That swung 32 seats over to the Liberals and NDP, with the New Democrats reaping most of the benefits (they were up 29 in Quebec, the Liberals were up four). Elsewhere, the Liberals made big gains since July in Ontario, up 11 seats, while the Tories were down eight. Other than that, only a seat or two changed hands compared with July.

A six-point lead is certainly good news for the Liberals, and as we have seen their seat potential in Quebec might be under-estimated. That still puts them squarely in minority territory, though, and the Liberals would need to take some huge strides forward to put them over the 169-seat mark. That seems unlikely in the short term, though for now it appears that Justin Trudeau's honeymoon is continuing. Whether the honeymoon will end remains to be seen. As I mentioned in my Globe article last week, Michael Ignatieff was still leading in the polls at about this point in his leadership, while Stéphane Dion had already given up the lead. So being ahead is not unprecedented, and also not (yet) a positive sign. But Ignatieff and Dion did not manage to consistently put up leads the size of Trudeau's, and that was in an era of the NDP polling in the mid-teens. Trudeau is on a slightly different path than his predecessors - at least so far.
Posted by Éric at 9:57:00 AM